Refugees pose on the deck of a ship headed for Haita. 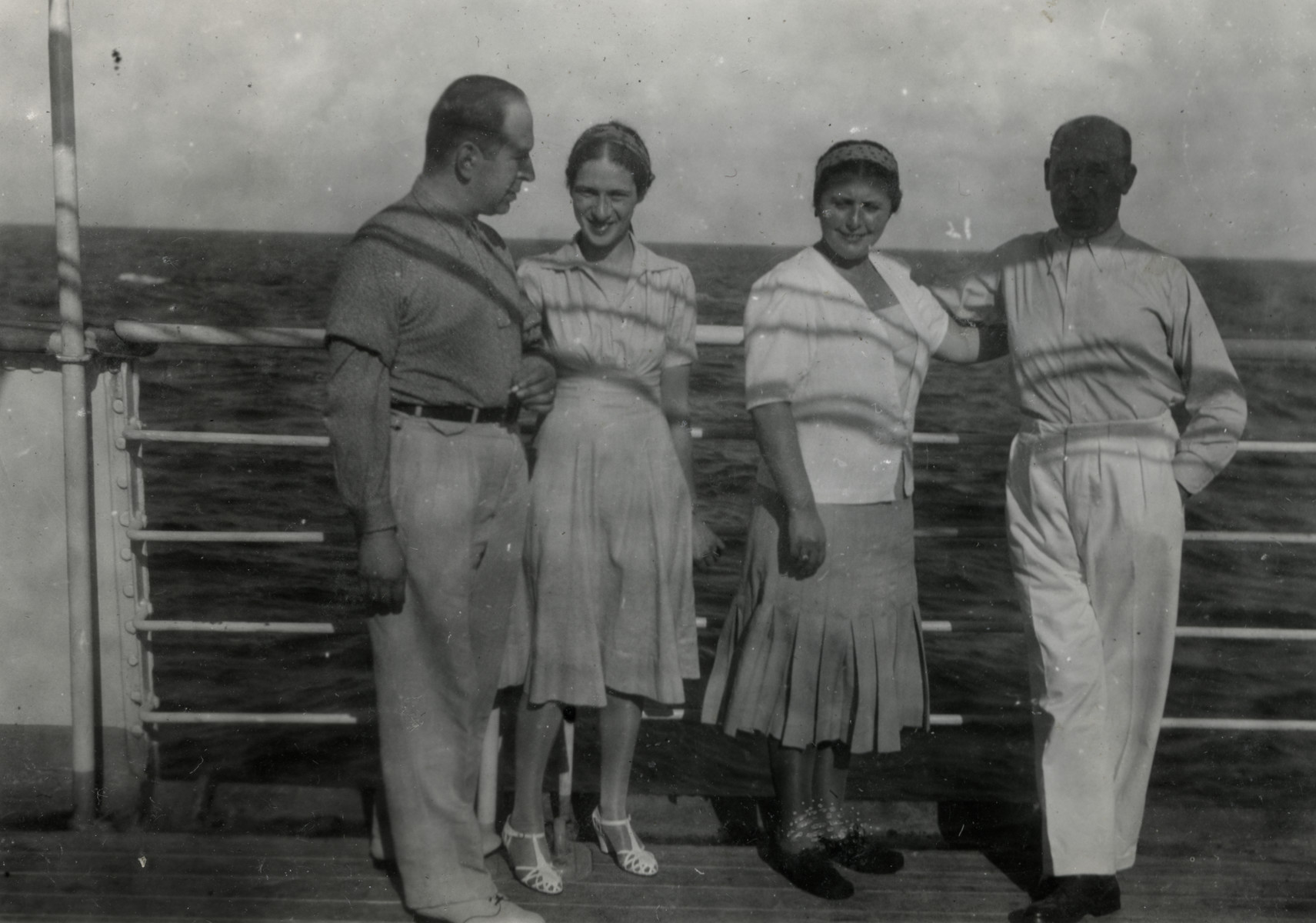 Refugees pose on the deck of a ship headed for Haita.

On the left are Herta and Walter Meinberg.

Biography
Eva Aviad (born Eva Meinberg) is the daughter of Walter Meinberg (b. Braunschweig, Germany May 6, 1896) and Herta Mayer (b. Koestlin, Germany Oct. 27, 1909). Eva was born in Port au Prince, Haiti on August 23, 1943. Walter's father, Joshua Meinberg, was a cattle and horse dealer. Walter worked at the Meinberg bank in Berlin which was owned by his cousin Alfred Meinberg. In 1933 Alfred Meinberg sold the bank and moved to Bauer au Lac Hotel in Zurich, Switzerland, where he remained until the end of the war. That same year, Walter's father committed suicide in response to the Nuremberg laws and the downturn in his business. After the bank was sold, Walter returned to Braunschweig to take over his father's business. Walter married Herta Mayer in 1937. Herta's father, Julius Mayer (b. April 12, 1865) died in World War I. Her mother Else Mayer (b. March 7, 1869) immigrated to Rio de Janerio, Brazil in 1937.

Walter and Herta remained in Braunschweig. In October 1938, Walter was arrested and sent to Buchenwald; his early release depended on his ability to leave Germany. Walter's wife and sister, Erna went to the Haitian Consul General Henri Fouchard in Hamburg and got a Haitian visa for Walter. Walter was released from Buchenwald after three weeks. Walter's brother Erich Meinberg had previously gone to Haiti on his honeymoon in 1937 and stayed which facilitated his passage there. Walter and Herta sent a life with all their household belongings, and they sailed in November 1939.

Herta had studied fashion design in Germany and was able to help support the family by producing and designing clothes for the upper echelon of Haitian society until her husband was able to set up a business. She also made all of her daughter's clothes. Walter began a business manufacturing objects from local products, such as sisal and hemp, flax and reed. They also made wooden bowls, fans and handbags from local products. Eva's parents had a still born son before she was born due to lack of proper medical care in Haiti. Eva remained in Haiti until 1958 when she went to boarding school in the U.S. and then to college where she graduated in 1965 from Skidmore. She received a M.S. degree in French literature and taught at the high school of Music and Art in NYC. She met and married Jacky Aviad in New York in 1975. He was at the Israel Consulate and they came to Israel in 1975 after Yakov served in Los Angeles, as Israel's Consul General. They continued to live abroad until Yakov's retirement in 1990, when they moved to Israel. Her parents left Haiti in 1976 and also immigrated to Israel. Eva has three daughters and several grandchildren.