Arabs and refugees walk down a street in Casablanca. 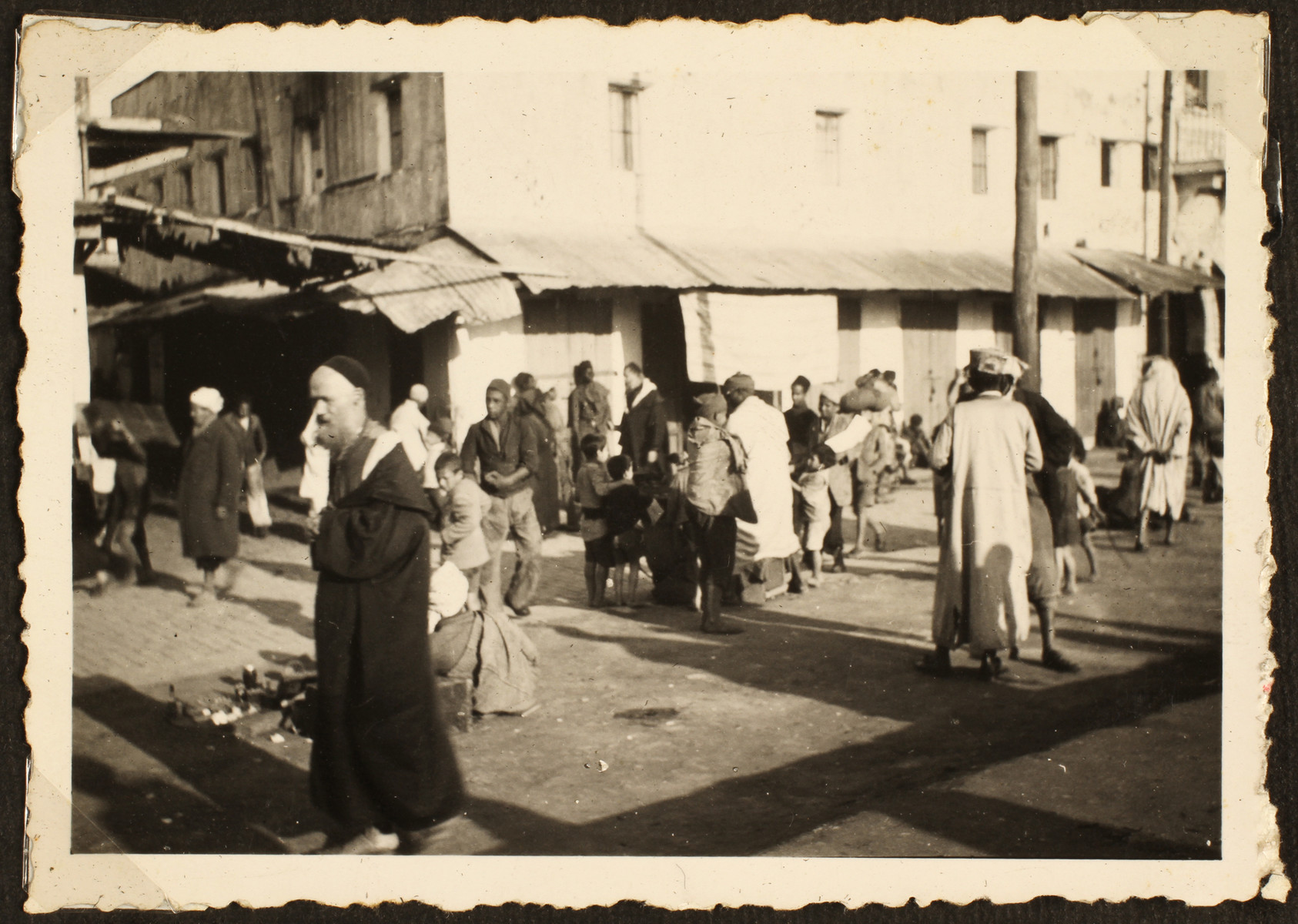 Arabs and refugees walk down a street in Casablanca.

Biography
Sophie Freud was born in on August 6, 1924 in Vienna, Austria. Her father, Dr. Martin Freud, was the oldest son of Dr. Sigmund Freud, the psychiatrist. Her mother, Ernestine (Esti) Drucker Freud, came from an affluent assimilated Jewish Viennese family. Sophie had an older brother, Walter, born on April 3, 1921 also in Vienna. As a child Sophie and Walter visited their famous grandfather, Sigmund Freud, every Sunday with their father. Martin Freud was born on December 6, 1889 in Vienna. In 1908 he entered the university to study law. He was an enthusiastic sportsman and, being politically engaged, had joined a Zionist movement, "The Kadimah" (Forward). In 1910 he joined the Imperial horse artillery, and when World War I broke out, he volunteered for military service. In January 1915 he was stationed in the Austro-Hungarian province of Galicia. After being slightly wounded in August 1915, he was promoted to lieutenant, but was taken prisoner of war. He was released in 1919.

Ernestine (Esti) Drucker was born on May 21, 1896 in Vienna to an affluent Jewish family. During World War I, Esti served as a volunteer Red Cross nurse from September 1914 to January 1915. She then took up speech instruction. Martin Freud and Esti Drucker met at a party during the war and corresponded regularly during his imprisonment as a prisoner of war. On December 7, 1919 they were married in Vienna. Martin was employed as a clerk in a newly created bank in Vienna, but having background in law, he became increasingly involved in his father's investments and helped manage the publication of his books. In fact he was in charge of the company, which published Sigmund Freud's books. Esti Freud began teaching speech techniques for people with speech impairments and voice disorders and became a speech, voice and hearing therapist. In 1932, she became a lecturer and teacher at the Vienna University for voice and speech techniques.

On March 13, 1938, the German army entered Vienna and Austria ceased to exist as an independent country. The Nazis immediately imposed anti-Jewish laws in Austria. Jews were treated harshly as in Germany and forbidden to engage in certain forms of commerce. Esti received a letter from the Department of Education revoking her teaching contract at the university. The family made plans to emigrate from Austria. In May 1938, Sophie's parents received their passports to travel abroad, and on May 14, 1938, Sophie and her mother took the night train from Vienna to Paris. Sophie's father, who had become estranged from his wife, left for London on the next day with Sophie's brother Walter. In the meantime, the persecution of Dr. Sigmund Freud by the Nazis in Vienna had made big headlines throughout the world, and in June1938, the professor and the rest of the Freud family also left for London.

In Paris, Esti organized a speech and voice rehabilitation clinic. She enrolled Sophie in the high school Lycee Jean de la Fontaine. But due to her poor French, Sophie lost a year's study. To avoid being late to class, she acquired and learned to ride a bicycle. Esti disapproved of Sophie's riding the bicycle the 8 miles to and from the Lycee and gave Sophie the bus fare. Sophie, however, used the bus fare to pay for parking the bicycle in a garage close to the school. In May 1940, Sophie heard that the population from northern France was leaving in a panic because the Germans had broken through the Maginot Line, which was the defense line on the French - Belgian border. On June 8, 1940, two days before Hitler entered Paris, Sophie and her mother, left Pairs on bicycles and headed south toward Nice. Esti Freud found work treating speech-handicapped children, and Sophie continued her schooling at the Lycee de Nice.

The situation in Nice deteriorated quickly after racial laws were enacted, and food shortages became acute. Esti and Sophie sought refuge elswhere. Esti's sisters, Lily and Marianne (Janne) and their families had previously left Vienna and immigrated to New York. After Lily succeeded in obtaining U.S. visas for Sophie and Esti in December 1941, they left Nice, France for Casablanca, Morocco to await the actual issuing of their American visas. Esti organized a school for deaf children and Sophie enrolled in a school that was organized by the Jewish community since the state-run high school was closed to Jews.

In September 1942, Sophie and Esti left Casablanca for Lisbon, Portugal, and on October 23, 1942, they boarded the S.S. Carvalho Arjuo and sailed to the United States. The ship docked in Baltimore, MD on November 2, 1942. Nine days before that date Esti's mother, Ida Drucker, was deported from Vienna to the Theresienstadt concentration camp. From there she was deported to Auschwitz death camp where she perished. Esti Freud continued her work as a speech therapist in New York, and in 1952, at the age of 56, she received her Ph.D. in speech therapy. Martin Freud continued to live in London. The two never divorced but never saw each other again. Walter Freud, Sophie's brother, also remained in England.

In 1942, at the age of 18, Sophie enrolled in Radcliffe College, where she majored in psychology. Three years later, she married a German immigrant, Paul Lowenstein, who had escaped from a Nazi transit camp in France. Sophie Freud Lowenstein and her husband Paul are the parents of three children. Their marriage dissolved after forty years, in 1980's. Sophie earned her master's degree in social work at Simmons College in Boston, MA, and her Ph.D. in social welfare at Brandeis University. She was a practicing social worker in the field of child welfare and child-parent guidance. In 1970 Sophie Freud obtained her Ph.D. from the Florence Heller School for Social Welfare at Brandeis and went on to become a professor at the School of Social Work at Simmons College. In 1988, Sophie wrote ''My Three Mothers and Other Passions'' and in 2007 she wrote "Living in the Shadow of the Freud Family" based on her mother's letters and autobiography. She is the book review editor of the American Journal of Psychotherapy, Professor Emeritus of Social Work at Simmons College and teaches at the Brandeis Osher Lifelong Learning Institute program.