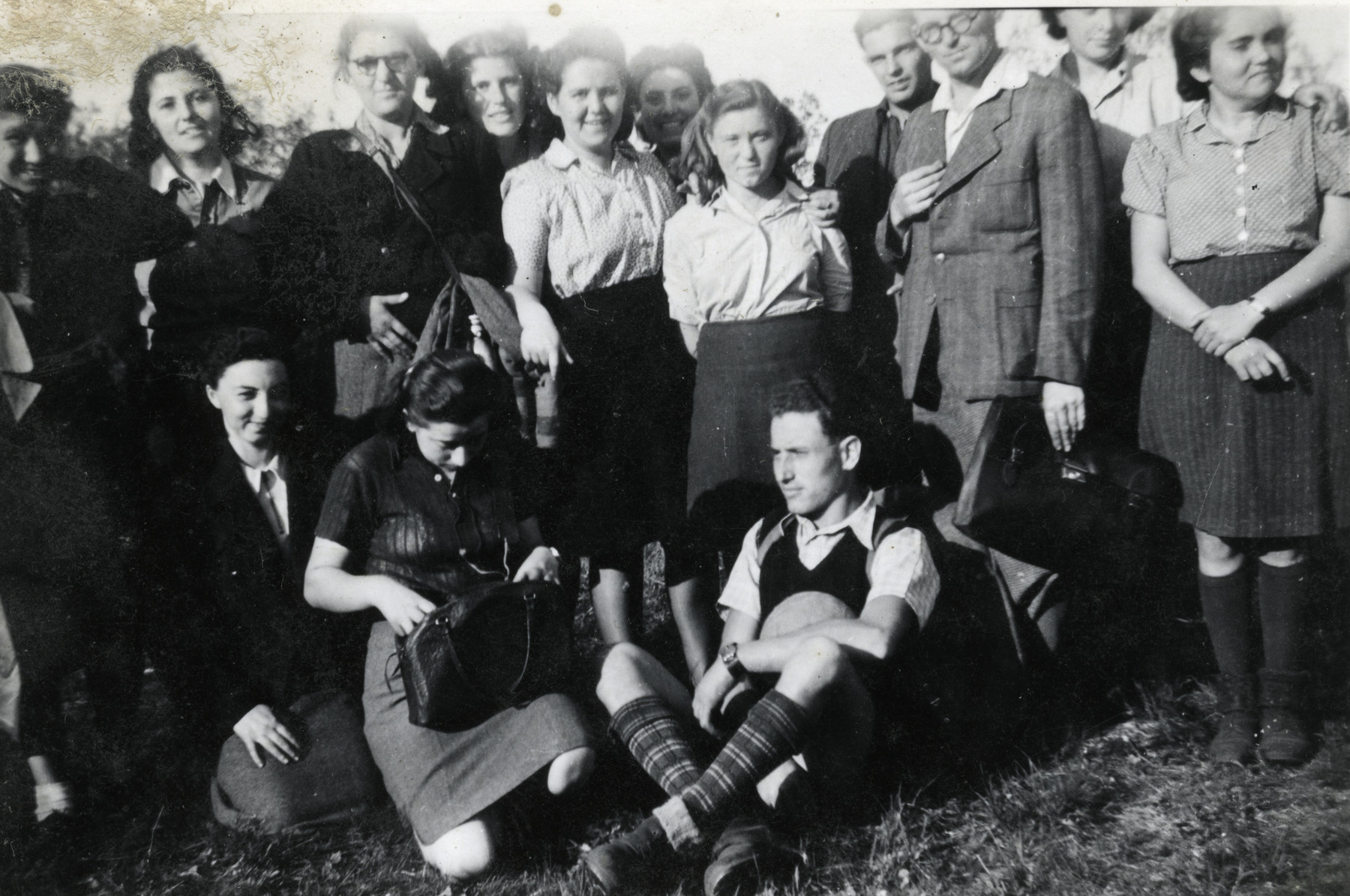 Esther Schaechter is fourth from the left in the back row.

Biography
Esther Vardi (born Esther Schaechter) is the daughter of Pinchas Schaechter (b. 1886, Kozepapsa) and Julia (Yocheved, nee Cohen) Schaechter (b. 1892, Hajdunanas, Hungary). Esther was born on June 11, 1922 in Tacovo, near the border of Czechoslovakia and Romania, where her father was a merchant. Pinchas Schaechter studied in a Satmar Hassidic Yeshiva until the age of 26 and then moved to Sighet. In 1912 he wed Rosa in an arranged marriage as was the custom in the Orthodox world. They settled in Tacovo and raised eight children, four boys and four girls: Ciri (b. 1914), Yossi (b. 1916), Rachel (Rushina, b. 1918), Zipporah (Zippi, b. 1920), Esther (b. 1922), David (b. 1924), Zvi (b. 1926), and Bezalel (b. 1930). The family spoke Yiddish at home and Hungarian and Czech otherwise. Esther attended a Beit Yaakov religious school, public elementary school and studied sewing once a week. Her oldest sister Ciri died in 1938 of pneumonia. That same year, Yossi, who had abandoned religion and joined a Zionist movement, immigrated to Palestine as a founder of Kibbutz HaOgen. His father felt this was a betrayal of his religious values and cut off ties to him. However, Zionism appealed to other siblings as well. Zippi left home for Hachshara training in Budapest in 1942 and eventually influenced Esther to join her. After spending the summer of 1942 in Zippi's Hachshara, Esther returned to Tacovo and helped support the family with her sewing skills. Many of her clients paid her with flour and food which at the time was even more valued than money.

After Germany's invasion of Hungary in March 1944, Esther returned to Budapest where Zippi and her boyfriend Efraim Agmon were involved with the Zionist underground. Since Esther did not look Jewish, she managed to go to the Department of the Interior to obtain a new identity card under the false name of Barbara which enabled her to work in a pants factory. Esther rented an apartment with a friend. Her landlord, unaware of her true identity, told her that many Jews were pretending to be Christians. The underground sent her on a mission to Kisvarda with 10 sets of forged papers in order to bring youngsters out of the Ghetto. Esther never worried that she would be caught as she looked Aryan. However, when the train stopped by the ghetto she was arrested as a Gentile. Esther was taken to the police station well aware that she had to get rid of the false papers she was carrying. She managed to get to the latrine where she tore up the papers. However, she was still imprisoned and beaten, and after ten days she admitted that she was Jewish.

The Zionist movement sent Rafi Ben Shalom to try and release her, but he didn't succeed. From this prison Esther was sent to a larger one in Budapest where she met other members of the youth movement. They then were transported to Auschwitz in June 1944. The youth knew where they were being sent and decided to jump from the train. Some succeeded and returned to Budapest, but Esther did not manage to jump. Upon arrival at Auschwitz she was given the number # A67409 and selected for work. She was sent to C lager and then sent to work in factories in B Lager. Since she was a seamstress, she was told to sew underpants from the clothes that were brought by the inmates for those being sent to work in Germany. In January 1945, immediately prior to the liberation of Auschwitz by the Red Army, Esther was sent on a death march. She slept in a barn for four days eating snow to survive. She wore wooden clogs without which she would not have been able to survive. Her group eventually reached a train station and was shipped to Bergen Belsen. Esther contracted typhus there but remained there until her liberation by the British army.

During most of this time in Auschwitz and Belsen, Esther stayed with three or four friends who supported each other and helped each other to survive. After liberation and her recuperation from typhus, Esther returned to Prague and then reunited with Zippi in Budapest. Esther then learned that her parents and younger brothers David and Bezalel all had perished.

Esther immigrated to Palestine in 1946 and lives today on Kibbutz HaOgen. She has three sons and several grandchildren. Her sister Zipporah (Zippi) married Efraim Agmon from the Zionist underground and passed away in 1966. Esther donated a watch to the Holocaust Museum that was given to her in Auschwitz and kept with her through the death march and in Belsen. The person who gave her the watch told her that she knew Esther was going to survive and wanted it preserved.