Class photograph of younger children in the Jewish school in Amsterdam. 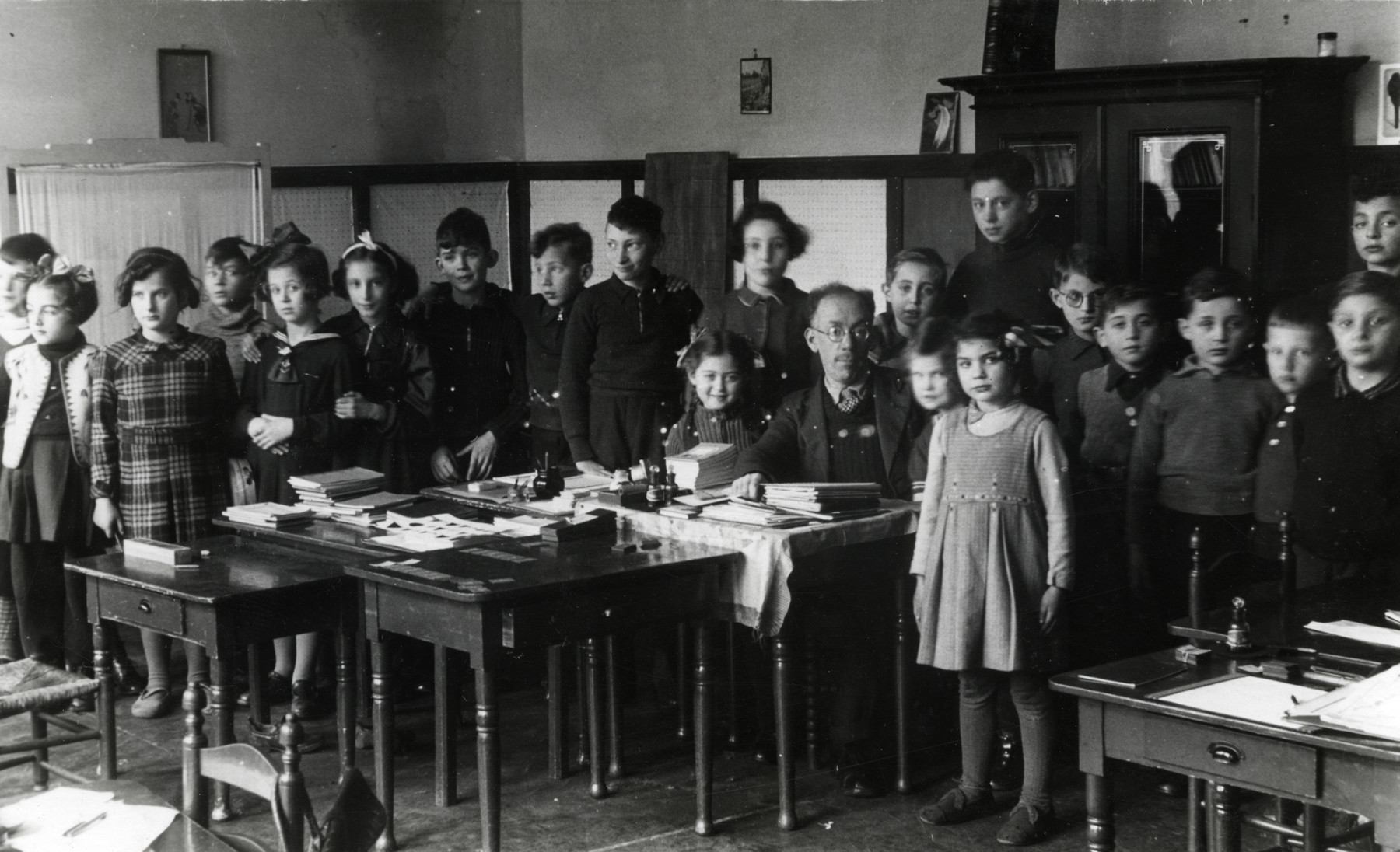 Class photograph of younger children in the Jewish school in Amsterdam.

Among those pictured is Hanan Kisch. Very few of his classmates survived.

Biography
Hanan and Eldad Kisch are the sons of Izaak Kisch (born Nov. 23, 1905) and Ina Mathilda Houthakker (born April 10, 1908), both in Amsterdam. Hanan was born on July 25, 1935 and Eldad was born on April 16, 1937. A third son Ilan was born May 23, 1946 after the war. Izaak Kisch was a lawyer and lecturer at the University of Amsterdam. Ina also trained as a lawyer but did not work in the field; she was very active in Jewish communal affairs. The family was well to do and lived in a canal house on Nicolas Witsenkade #28. They had a live in maid and a governess. The family was not religious, but they observed the Jewish holidays and were active Zionists. Hanan and Eldad attended public school and they started studying Hebrew at the age of six.
In May 1940 Germany invaded The Netherlands. The following year, Izaak lost his job at the university (his farewell address to his students which is published in the footnotes of the DeJong book). About the same time, the Kisch family gave refuge to a German youngster, Hildagard Schloss (b. 1928 Gelsenkirschen, Germany), who stayed with them for the duration of the war as a foster child. Soon afterwards, occupied Holland began instituting anti-Jewish restrictions. The boys' school became segregated, and Jewish pupils had to attend separate classes and enter through the rear entrance using a different staircase. Izaak was elected to the Jewish Council (Joodse Raad) and sat there as an observer of the widely respected lawyer Lodewijk Visser, the deposed Chief Justice of the High Court of the Netherlands and a Jew. However, after a short while, Izaak resigned, feeling that those participating in the Council were collaborators. He wrote a letter to David Cohen who was head of the Council (Professor of Classics) and whom the family knew personally, pointing out the pernicious activity of the Council. Resigning from the Council was a very courageous and potentially dangerous course of action, but no reprisal ensued. However after the war, Kisch objected to putting Cohen on trial for collaboration feeling he had suffered enough in concentration camp.
In September 1943, all remaining Jews in Amsterdam were rounded up to that the city could be declared "free of Jews". The entire Kisch family also was picked up by the Dutch police. However, owing to Izaak's previous position, they were sent with approximately 700 other prominent Jews including artists, physicians, scientists and industrialists as well as other prominent members of the community to the town of Barneveld. Izaak functioned as a liaison between the camp and the authorities. Those on the list were indebted to K. J. Frederiks, Secretary General of the Ministry of the Interior who had intervened with the SS to protect a number of "well deserving Jews". Izaak's father died in Barneveld, but he was allowed to be buried in Muiderberg, the Jewish cemetery of Amsterdam. Barneveld was in existence for only about nine months. On September 29, 1943, on the same day as the last big round-up in Amsterdam, the Germans cleared Barneveld in violation of their commitment to Frederiks. The Jewish internees, including the Kisch family were sent to Westerbork.

In Westerbork the Barneveld Jews still maintained some protective status and were not shipped out to Auschwitz or Sobibor. The Kisch family remained in Westerbork for a year. The boys attended school of sorts. When their mother fell seriously ill with pleurisy, they moved to the orphanage during their mother's extended stay in the hospital. After their mother recovered sufficiently, they were sent to Theresienstadt on September 13, 1944 on the last transport leaving Westerbork. In Terezin the boys lived together with their parents. Their mother worked splitting mica (glimmer) in the industry workshop. Later on the family got a private room because their mother was head of the Dresdener Kaserne #H5. In Terezin there were no schools and the boys were free to roam and search for belongings, coal and potatoes left behind from deportees to Auschwitz. Izaak worked in the library organizing the books that arrived with the deportees and confiscated from Jewish libraries in Czechoslovakia. The Barneveld Jews were protected in Terezin and were not sent to Auschwitz. (Some people on the Barneveld list also had certificates to Palestine and had been given the option of going to Bergen-Belsen rather than Terezin. Some 220 of these certificate holders were exchanged in June 1944 for Templars from Palestine, but many others did not survive.)
Soviet soldiers liberated Theresienstadt on May 8th by the Soviet army, but the Kisch family remained in Terezin for an additional six weeks. Eventually with French assistance, they returned to The Netherlands. They were taken to the Dobrany camp near Pilsen in the temporary American zone in southwestern Czechoslovakia where they stayed together with the interned Sudeten Germans and then were flown back to Holland on U.S. DC-3's in June and were able to move back into their former house.
Hildagard Schloss was initially interned as an "enemy alien" upon her return to The Netherlands but later rejoined the family in Amsterdam. Subsequently, she learned with the help of her younger sister that her father and brother survived (but not her mother), and she joined them in the United States.

Izaak Kisch was appointed Professor of Comparative Law and Philosophy of Law right after the war in place of his teacher, Paul Scholten, who had been deposed of by the Germans and replaced by a Nazi-sympathizer. He was appointed Justice at the High Court of Netherlands in 1960, but resigned after two years to resume his professorship in Amsterdam. Upon returning to Holland Ina Kisch was very active in Jewish affairs in the community and served as chairperson of "De Joodse Invalide" and WIZO. However, she was in poor health since returning and died in August 1949; Izaak never remarried and died in 1980.

Eldad came to Israel in 1962 after studying at the University of Amsterdam. He is a doctor of Endocrinology. In 1963 he returned to Amsterdam to pack his things up to return to Israel and met and married Annelien Kroon, a non Jew. Her parents Kleys and Henrietta Kroon hid Jews during the war and were recognized by Yad Vashem as Righteous Among the Nations. They have three children and six grandchildren. Hanan studied geology at the University of Amsterdam, while active in the Habonim youth movement and the Netherlands Zionist student organization (NZSO). He married Guurtje Heringa in 1962 and worked as a research scientist with CSIRO in Australia and lecturer in Mineralogy at the State University in Leiden, until immigrating to Israel in 1973 to become Professor of Geology at Ben Gurion University in the Negev (emeritus since 2005) He had three children and five grandchildren.