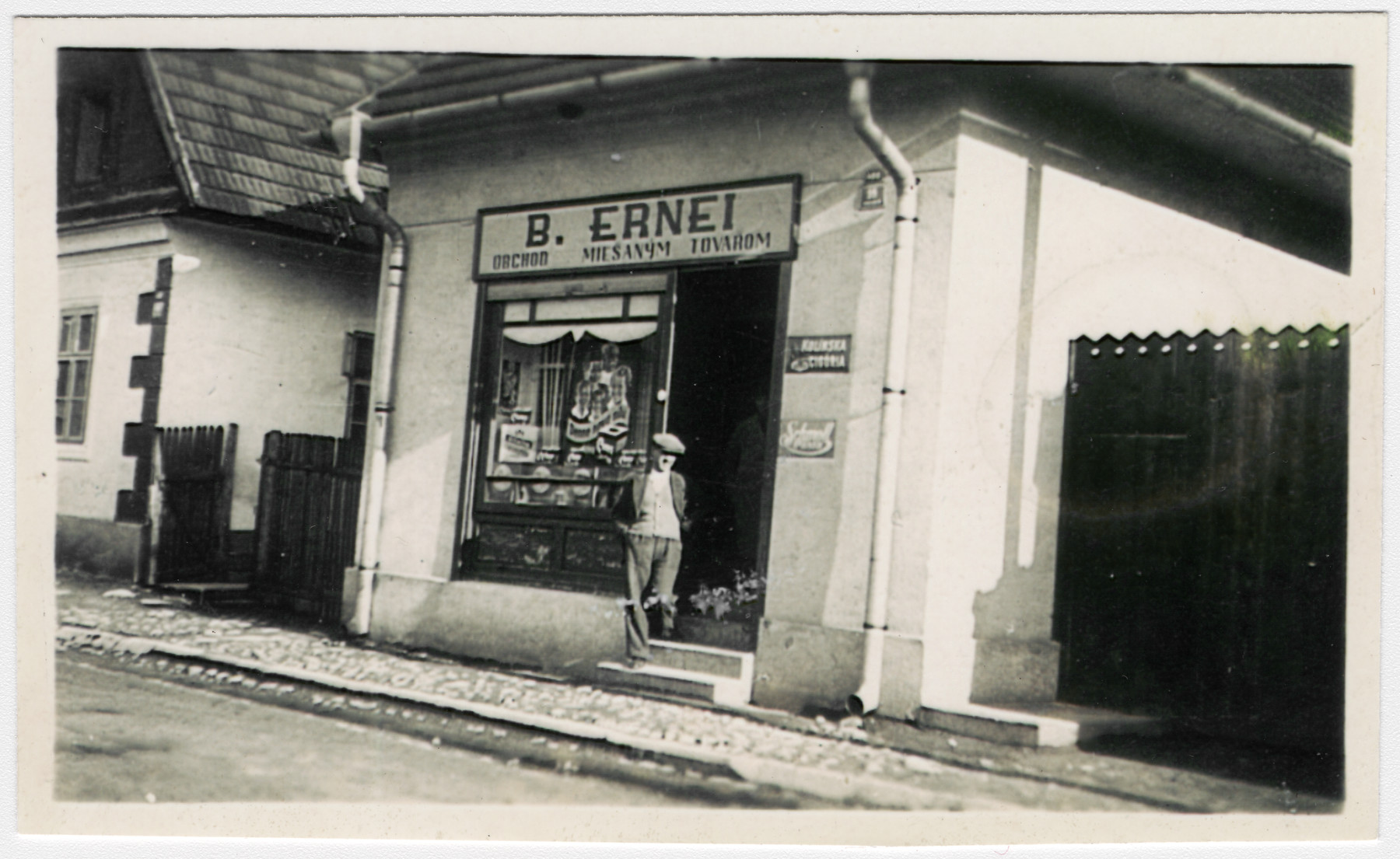 Biography
Cary Lowe is the son of Ernest Lowe, a Viennese Jewish refugee, and Valerie Ernei Lowe, a Slovak Jew who survived the war in hiding.


Valerie Ernei Lowe was the youngest child of Leona Berger (b. December 24, 1891) and Jacob Ernei (b. September 16, 1887). Four of Jacob's siblings (Simon, Hermina, Joe and Fanny) had immigrated to the United States in the early 1920s; the rest of his family lived in various towns in Slovakia. Leona had two sisters in Budapest and one who immigrated to New York City. Valerie was born in 1921 in Zilina, Slovakia. She had two older sisters, Edith (b. 1916) and Magda (b. 1918). Jacob Ernei had owned grocery stores in two towns, but, after the economy took a downturn, he became a traveling salesman for a company that manufactured shoe polish and cleaning equipment. To help support the family, Leona sold cosmetics and soaps. Leona was totally secular; Jacob was somewhat more religious. Most of their friends and the children's friends were not Jewish. Magda received a scholarship to a medical school in Brno but, after completing three years of studies, she had to stop in 1935 due to anti-Semitism. Based on Magda's experiences, Valerie chose to become an apprentice dress-maker rather than attend college. After the dismemberment of Czechoslovakia, Slovakia allied with Germany in November 1940 and became the first Axis partner to consent to the deportation of its Jewish residents. A friend of Valerie was engaged to a member of the Hlinka Guard (Slovak state police), who forewarned the Erneis in 1942 of the imminent start of a round-up of Jews. Magda and Valerie decided to flee to the nearby mountains. Their parents remained behind, convinced that only young people risked deportation. Edith, who led a Bohemian lifestyle and had many friends, also chose to remain behind. Magda and Valerie were able to check on their parents every few weeks. At first, everything was fine, but then the police chief in Zilina, who was a family friend, told them their parents had been taken away and there was nothing he could have done to prevent it. Edith was deported together with the parents. After a few months on their own, Magda and Valerie found shelter with religious Baptists, who helped them obtain false identity papers and placed them with families who would shelter and feed them in return for work. Initially, both lived with peasant families in small villages. Then, Valerie was taken in by a baker and his family in Poprad, and Magda went to live with the family of a factory owner in Michalovce. They posed as cousins of their rescuers, but Valerie was almost found out several times. The sisters corresponded with each other throughout this time. In August 1944, Valerie entered a hospital with false papers to have her tonsils removed; Magda came to take care of her. A few days later, the physician told them they should leave immediately because an anti-Fascist uprising had broken out, and German troops were expected to come to the town. The two sisters walked for several days through the mountains, finally reaching Banska Bystrica, the seat of the uprising. There, Magda got a job with the Ministry of Health of the provisional Slovak government, based on her medical school background, and Valerie sewed uniforms for the partisans. When the Germans suppressed the uprising after a few months, the sisters decided to return to Poprad. However, the baker told them it was no longer safe for them to stay with him. Instead, his assistant brought Valerie to his brother in a village in the mountains, and Magda returned to her previous rescuers. In early 1945, after Russian soldiers liberated Slovakia, Valerie returned to Zilina to learn what had happened to the rest of the family. She found out that her parents had been killed, but no one knew Edith's fate. Magda, meanwhile, had gone to Kosice, where the new Slovak government was being formed, and again got a position in the Health Ministry. There she met Thomas Hora, a doctor and officer in the Czech Swoboda Army. They married on April 22, 1945 and moved to Karlovy Vary (Karlsbad), where he worked as a physician in a hospital. Valerie joined them there and found work again as a seamstress. Magda remembered the address of their father's sister Fanny in New Jersey, and wrote to her to see if she would sponsor their immigration. Fanny immediately sent the necessary papers for all three of them to obtain visas, and they arrived in New York on June 15, 1946. Soon afterwards, Valerie met Ernest Lowe. They married on May 8, 1947, and soon returned to Europe. Years later, after moving back to the United States, Valerie was able to use her training and experience in Europe to establish successful custom dressmaking businesses in Boston and Seattle.


Ernest Lowe was the son of Siegfried (Fred) and Rozinka (Rose) Loewy. Siegfried had siblings who immigrated to the United States early in the century. His half-sister Sophie married a businessman, Abraham Frank, and settled in Paducah, Kentucky, where they operated a store on the Ohio River and acquired land. Siegfried also came to America, in 1907, and lived near Sophie. However, he was already engaged to his distant cousin Rozinka and returned to Austria two years later. They married in 1911 and had their first child Marianne (Mimi) the following year. Ernest was born on August 2, 1917 in Volenice, now in the Czech Republic. However, he grew up mainly in Vienna, where his father worked first as manager of a lumber business and later in various manufacturing companies. After completing high school, Ernest studied chemical engineering at the Vienna University of Technology. He had completed three years of studies when Germany annexed Austria in March 1938, after which all the Jewish students were expelled. Immediately after the Anschluss, Ernest and Mimi went to the American consulate to apply for visas. Ernest was 21; Mimi was 26. Siegfried's half-sister in Kentucky furnished their affidavits. Mimi received her visa in September and left Vienna in November, immediately following the Kristallnacht riots, settling in Paducah with Sophie's family. Ernest didn't receive his visa until the following March. After coming to America, he settled in New York, where there were more economic opportunities than in Paducah, and found work doing radio assembly for Scott Radio Company. A few months later, Siegfried and Rozinka also immigrated to the United States. In 1943, Ernest was drafted into the U.S. Army and initially was stationed in Camp McCain, Mississippi, close to where Sophie Frank and her family had moved. In 1944, he went overseas with a field artillery battalion, part of the 87th Division in General George Patton's Third Army. His unit fought from Metz, France until the fall of Germany the following year. That included participating in the Battle of the Bulge, where Ernest was wounded. After his return to the United States in 1945 and discharge from the Army, he was recruited to work as an investigator and translator for the second phase of the Nuremberg War Crimes Tribunal, based on his fluency in several languages and his European background. In the meantime, he met Valerie Ernei, and married her on May 8, 1947 in New York. He then returned to Europe, and she followed him a few months later. At the conclusion of the Nuremberg Tribunal, Ernest was recruited to join U.S. Army Counterintelligence, and stationed with a detachment in Adolf Hitler's home town of Braunau, Austria. Shortly after Ernest and Valerie moved to Braunau, their first son, Cary (the donor), was born in Linz, the site of the nearest American hospital. Their second son, Dean, was born in 1953 in Salzburg. The family lived in Austria until the end of the post-war occupation in 1955. Ernest then transferred to U.S. Air Force Intelligence at Air Force European Headquarters in Wiesbaden, Germany. The family lived in Germany until 1961, at which time they moved back to the United States, where Ernest spent the rest of his career in a series of military intelligence positions.