Tzippy Teichman (left) poses with Anushka, the care-taker of their apartment on 19 Retek Street. 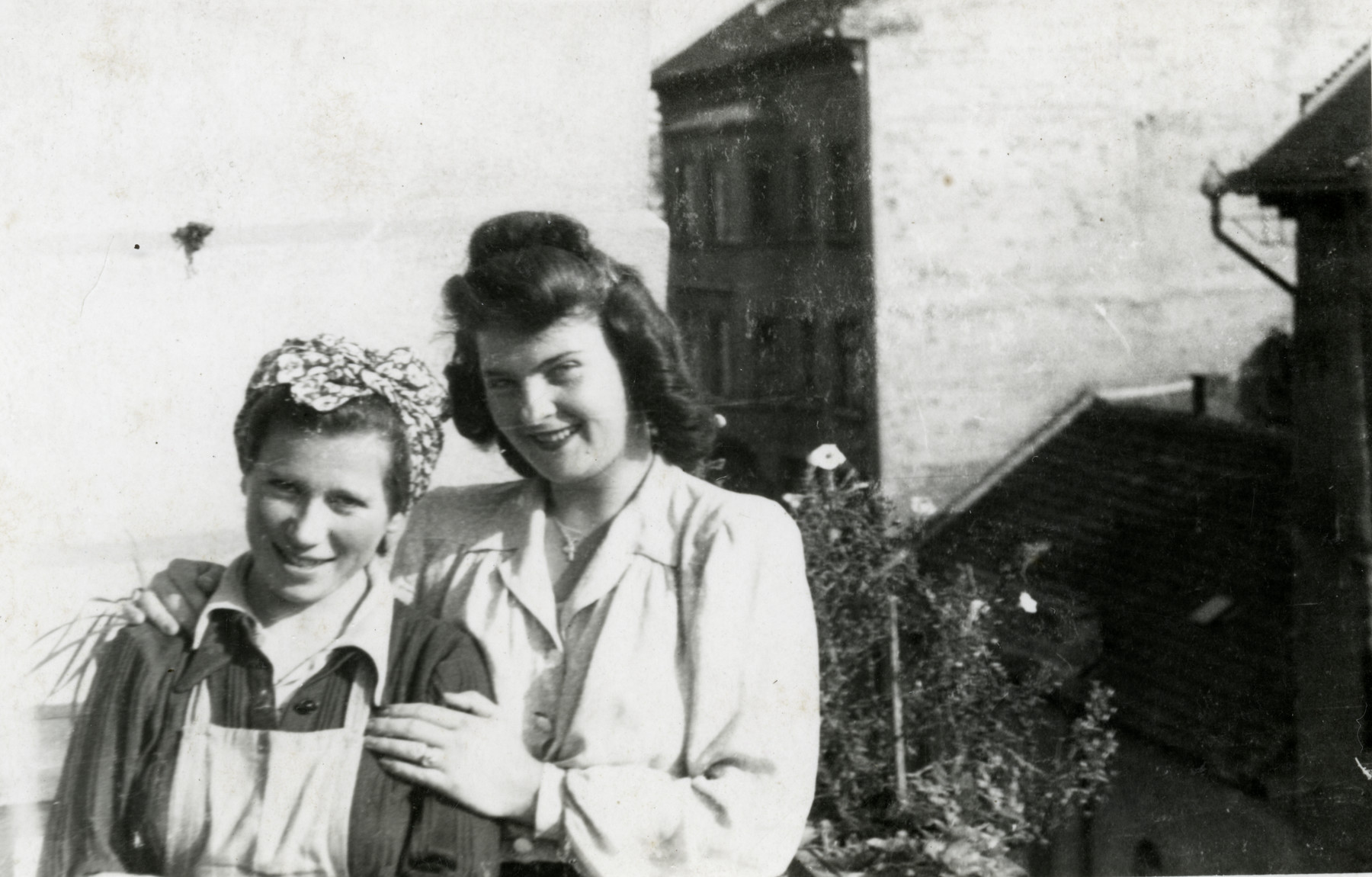 Tzippy Teichman (left) poses with Anushka, the care-taker of their apartment on 19 Retek Street.

For some weeks Tzippy and Ephraim allowed David Gur, their friend from the resistance, to manufacture false papers in that apartment.

Biography
Ephraim Fishel Teichman (later Ephra Agmon) is the son of Moshe (Wolf, Mor) Teichman (b. 1883, Mukachevo) and Piroska (Pesel) nee Neuman Teichman (b. 1897, Nagyszoollos). Ephraim was born in 1922 in Kisvarda where his father was a glazier and owned a glass and porcelain store. He had seven younger siblings: Yosef (b.1924), Avigdor (b. 1925), Yehudit (b. 1930), Khaia Sarah (or Chaya Sora, b. 1931), Tzipora (called Tchuppi in Hungarian, b. 1932), Naftali (b. 1937) and Michael (or Yehiel, b. 1938). His sister Yehudit had lost her hearing as a child as the result of disease. The family was strictly Orthodox. Ephraim attended Jewish elementary school for six years, and a few years of high school and years of yeshiva. As a teenager, he began to drift away from his strictly Orthodox upbringing. He read secular books, shaved off his ear-locks and joined the Socialist Zionist organization, Shomer Hatzair.

In 1939 Hungary annexed Transcarpathia and enacted antisemitic legislation, including the induction of young Jewish men into labor brigades. On October 1, 1943 Ephraim received his conscription notice. He decided to flee to Budapest with help of friends from Shomer Hatzair to find security in the anonymity of the large city. He soon became friendly with other young Jewish refugees from Slovakia and Poland, who warned him about German intentions and described the deportations, ghettoes, and concentration camps in Nazi-occupied Europe. Ephraim joined the Hehalutz underground, composed of young people from various Zionist youth movements including Dror, Habonim, Shomer Hatzair, Bnai Akiva, and Betar. However, many older Jews could not believe anything similar could happen in Hungary.

In 1944 the movement sent Ephraim on a mission to Munkacz (Mukachevo) to meet the underground there and warn them what was happening. Four days after his arrival, Germany invaded Hungary. Ephraim met his aunt in Munkacz, and she told his parents that he was there. Ephraim's father took a train to meet him, and it was the first time they had met in a year. Ephraim tried to convince his father to send his younger brothers to Budapest to escape the Nazi yoke. His father replied that while Ephraim had made the proper choice for himself, the rest of the family would stay together and trust in God. Ephraim's father blessed him, and that was the last time they saw each other. Ephraim managed to return to Budapest under the cover that he needed to rejoin his labor battalion. He arrived in the city on April 15, the same day the Germans created a ghetto in Munkacz.

Once in Budapest, Ephraim rejoined the Zionist underground. The movement's first task was the creation of false Aryan papers so that the members could travel freely to do their other work. They continued to send members to the countryside where Jews were already incarcerated in ghettoes to warn the population and give the young people money and false identification cards so they could flee. Ephraim was sent to the ghetto of Mateszalka where he made contact with members of Judenrat. However, they did not believe that deportation would lead to murder and did not want to take action. The only people who believed him were other young members of the Zionist movements.

During the late spring of 1944 Ephraim met Tzippora (Tzippy, Franciska) Schaechter. She was born 1920 in Tesco. She grew up in a Chassidic home, but she and many of her siblings abandoned Orthodoxy for Zionism. She also joined Shomer Hatzair and moved to Budapest in 1940. Since she did not look Jewish, she worked as a courier for the underground doing many dangerous missions using the name of Anna Bolag. Ephraim and Tzippy wed unofficially on June 18, 1944 and later had a more formal marriage ceremony.

In June to August 1944 Ephraim focused his energies on bringing fugitives out of Poland and Slovakia by way of Hungary to Romania on an underground railroad known as the "Tiyul" (excursion). Ephraim was responsible for organizing groups, making sure papers arrangements in place, and reassuring the participants. Ephraim carried a false identity papers under the name of Imre (Emerich) Benko. He wore the garb of a railway official, which allowed him to take trains without paying. He also traveled to work camps to help people escape with false documents. The Tiyul ended on August 23, 1944 with the overthrow of Antonescu, resulting in Romania ending its alliance with Germany and sealing its border with Hungary. The underground continued pursuing other activities including the distribution of thousands of false papers to anyone who needed them and to provide for the children living in more than thirty children's homes under the auspices of the Red Cross. Ephraim helped equip these homes with household goods, food and medicine. After occupation Ephraim worked taking children from the homes in Budapest to rural areas where the conditions were better.

In April 1945 Ephraim returned to Kisvarda to look for his family. He reunited with two brothers Yosef and Avigdor who survived Auschwitz. His brothers remained in Kisvarda for a few years and then moved to the United States. They maintained as Orthodox Jews. Ephraim's' sister Yehudit came to Switzerland on the Kasztner train, and later immigrated to Israel. His parents perished in Auschwitz together with his two younger siblings: Khaia and Tzipora. His two youngest siblings had died around 1942 as a result of accidentally eating poisonous mushrooms on a family outing. Tzippy's sister, Esther who had also belonged to the underground, survived incarceration in Auschwitz and Bergen-Belsen. Their parents, Pinchas and Yochevet Schaechter, and brothers David and Bezalel perished in Auschwitz.

In 1946 Ephraim organized Shomria, a Zionist youth summer camp, and that November he left Hungary to participate in the Hungarian delegation to the 22nd Zionist Congress in Basel. He then immigrated to Palestine in January. Tzippy joined him the following month, and they settled on a kibbutz. After Tzippy passed away from heart disease in 1966, Ephraim remarried Tamar Ephrat.