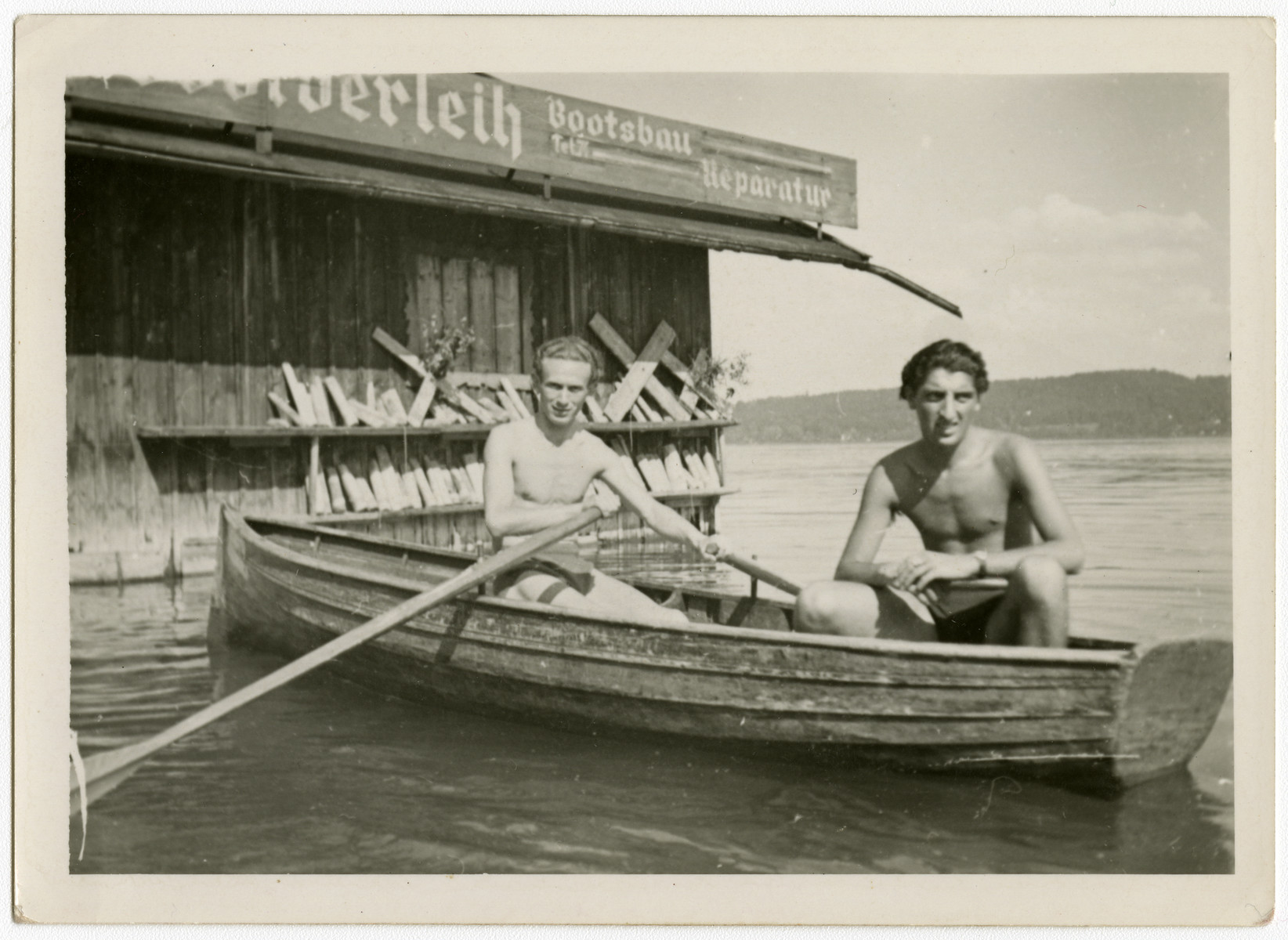 Henek Haberman is on the left and Chamek (Harry) Weinroth is on the right.

Biography
Luba Weinroth (born Luba Kerschenblat) is the daughter of Moishe and Mana (nee Silberstein, later Muriel) Kerschenblat. She was born on July 30 1932 in Warsaw, Poland, and has one sister Frieda who was born after the war. Moishe was a tailor, and Mana was a seamstress. They met at work and continued to work at the same company until the start of the war. Luba's grandmother, Freida Silberstein, lived with them and helped care for Luba. Following the German invasion of Poland, Moishe Kerschenblat fled east since he was afraid he would be taken by the Germans. He returned after a few weeks to bring his family back with him. At first Mana was reluctant to move, but as conditions worsened she agreed, and the family went to Bialystok. Moishe registered the family with the Russians to move into the Soviet interior to be farther from the Germans. The Russians put them on a train, and after a few weeks they arrived in Nizhnii Tagil, Siberia. It was always bitter cold; Moishe and Mana had to perform hard labor, but Luba was allowed to attend school. Her grandmother became ill and remained at home. The family received meager food rations, but Moishe managed to barter his tailoring skills for extra bread. However he became determined to find a way for the family to leave. After six months, the family received some papers and smuggled themselves out on a night time train.

The Kerschenblats arrived in Moscow, but they were not allowed to stay for very long. After a short time, they received permission to travel to Saratov. They remained there for little over a year during which time Freida Silberstein succumbed to her illness and passed away. In June 1941, Germany invaded the Soviet Union. Moishe decided to relocate the family once again to be farther from the Germans. They went to Jalalabat in Uzbekistan where they lived in a clay hut. Moishe worked in a factory which stuffed cotton into bags for transport and eventually became a foreman. Luba was twelve years-old when the war finally ended. The Kerschenblats returned to Poland, spent two weeks in Cracow before moving to Loge, where Mana gave birth to a second daughter, Frieda, named in memory of her mother. In 1946 they moved to the Schlachtensee displaced persons camp in Berlin, where Luba studied Hebrew, German and English. When it closed, they moved to the Feldafing camp near Munich. Luba enrolled in an ORT vocational school to learn a trade. She received her diploma after completing classes making women's lingerie. She also met Chaim Wajnrot, a survivor of approximately 19 camps. In 1951, the Kerschenblats immigrated to the United States aboard the American military ship the General Stewart and settled in Brooklyn, New York.

Chaim (Chamek) Wajnrot (later Harry Weinroth) was the son of Leizor and Sala Rachia (nee Wilczyk) Wajnrot. Chaim was born on February 20, 1925 in Sosnowiec, Poland where his father was watchmaker and jeweler. There were six children in the family: Sofi, Chaim, Srulek, Alek, Josel and Frieda. After the start of the war in 1939, all of the watchmakers including Chaim's father were rounded- up and were sent to Niederkirchen, Germany; Chaim was sent to a different labor camp. He said good-bye to his family not realizing this would be the last time he would see them. Chaim was brought by bus to a labor camp in Kochanowitz about 200 kilometers away to work on the construction of the Autobahn. After a few months (sometime in the spring of 1940), the prisoners were transferred to another labor camp in Brande, where they continued to build the highway. He remained there for approximately 8 to 9 months. Following the 1941 German invasion of the Soviet Union, Chaim was sent to Gross Masselwitz to prepare for an assignment in Russia. The prisoners were given inoculations for infectious diseases and an Organization Todt armband. Afterwards 351 Jewish prisoners were sent by train to the Soviet Union. The train served as their barracks for the next four months. Living conditions were terrible; there was little food and they were always freezing. During the day the prisoners worked reconfiguring railroad tracks to make them compatible for German trains. In April 1942, Chaim returned to Germany; he was one of only about 120 prisoners who survived the ordeal. He was brought to Annaberg which seemed like a vacation compared to the train camp. He was given three meals a day and began to regain his health. He also communicated with his family for the last time. After about a month Chaim was sent to another labor camp in Markstaedt to work building wells. Since his work site was outside the camp itself, he managed to find some extra food. However soon he was transferred to nearby Fuenfteichen. He worked at the same job, but the new camp was officially a concentration camp with much worse conditions. From there he went on a forced march to Gross Rosen in the winter 1943-1944. Many died along the road, and the Germans killed anyone who fell down. After a couple of weeks, they arrived in Gross Rosen and were greeted by the smell of the crematoria and gas chambers. The prisoners were not given any real work to do but made to carry stones from one end of the camp to the other. After about six weeks, Chaim was sent to Buchenwald by train. Conditions were equally horrible, and thousands of corpses lay on the ground unburied. Towards the end of 1944, Chaim was transferred to Bisingen. Conditions there were better, and the Germans used the prisoners to help with oil exploration. He then was taken to Schoerzinger and eventually to Allach, a sub-camp of Dachau. On occasion, the Germans brought the prisoners to Munich to clean up rubble from Allied bombings. By this point the Allies were getting closer. The Germans had planned to evacuate the prisoners to Austria. Chaim was placed on a train, but after the train tracks were bombed, and a few days later he was liberated by the American Army.

Following liberation, Chaim went to the Feldafing displaced persons camp near Munich to recover. He had been convinced that no one else from his family had survived, but to his delight, his oldest sister Sofi found him. Sofi (later Glucksman, b. December 10, 1923) had survived incarceration in Auschwitz. All of the rest of the family perished in the Holocaust. Chaim (Harry) apprenticed himself to a watchmaker in Munich and learned the trade. The watchmaker was very kind to him and treated him like a member of his family. He worked there until he left for America in 1949. During his last year in the camp, he met Luba Kerschenblat and they began dating. However, after Harry left for America they lost touch. He settled in Stamford, Connecticut and established his own watch repair business. After Luba and her family immigrated to New York in 1951, she and Harry reconnected. They married the following year and went on to have three children: Larry, Ruth, and Seth.