Members of the SA arrest Jewish men from Oldenburg and march them through the streets as bystanders look on. Among those pictured is the great grandfather of the donor, Adolf Daniel de-Beer. 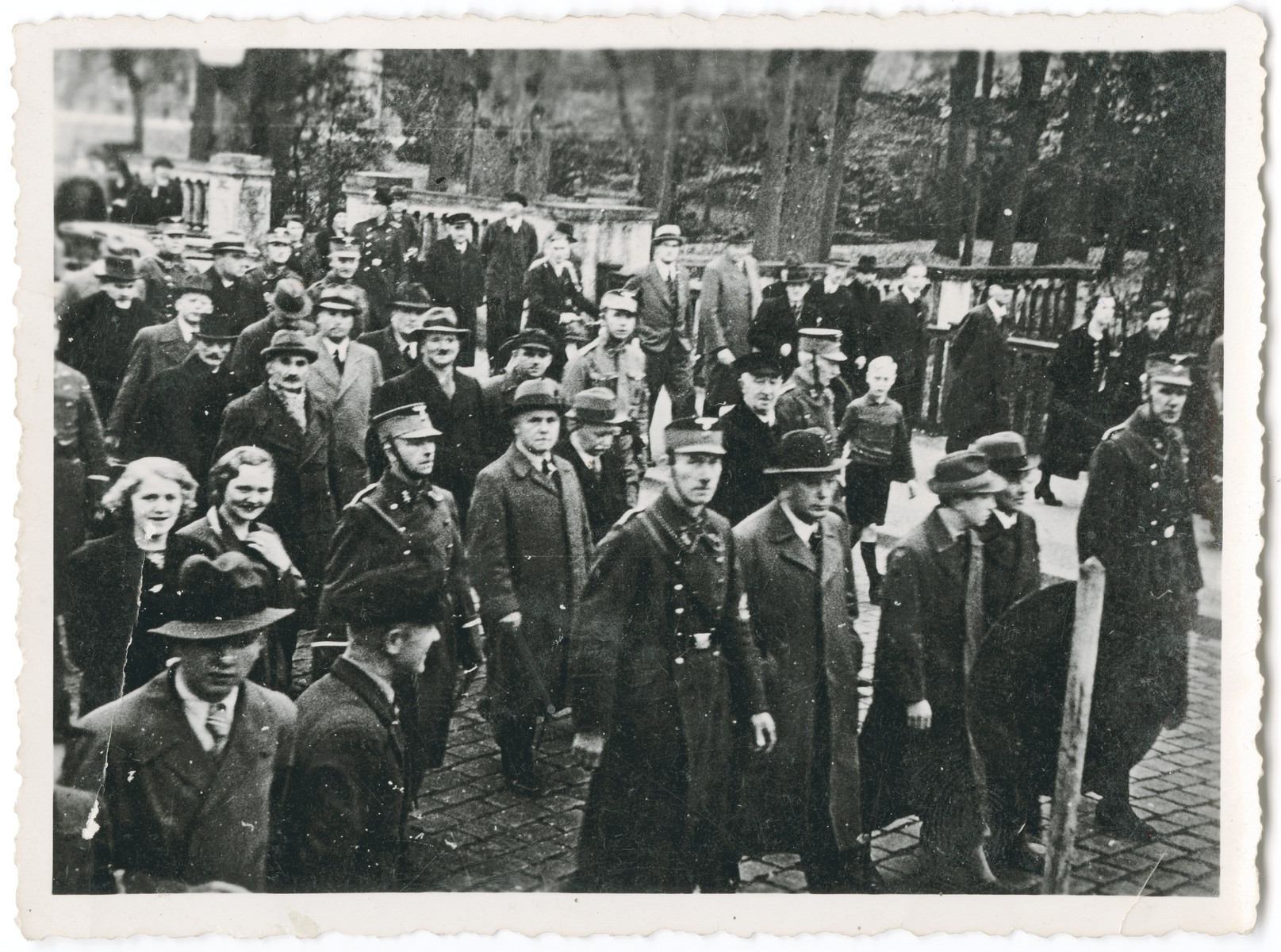 Members of the SA arrest Jewish men from Oldenburg and march them through the streets as bystanders look on. Among those pictured is the great grandfather of the donor, Adolf Daniel de-Beer.

The orignal caption reads: "SA arrest and transport the Jews of Oldenburg to prison and concentration camp. Part of a series of ten photographs."

Biography
Abraham Levi is the son of Hedwig Jocheved de Levie-Levy and Ernest Simon Levy. Hedwig de Levie was born in 1924 in Oldenburg, and Ernest Simon Levy was born in Breslau in 1925. Ernest Levy immigrated to Palestine in 1939 together with his parents Siegfried Meyer Levy and Hannah Cohen Levy and his younger brother Hans Michael on one of the last ships to arrive before the war. The Levys left Breslau in 1939 and stayed in Trieste for six months while awaiting their certificates for Palestine. During that time Siegfried was hospitalized for acute essential hypertension. Traveling on capitalist visas, they sailed on the 'Jerusalema' and disembarked at the Port of Tel Aviv on the 21st of August, 1939. The family had a wholesale liquor bottling firm called S. Levy. Siegfried's twin brother, Isidor, was killed as a German soldier in the initial stage of World War I and is buried in a German military cemetery in Belgium. Siegfried Meyer died shortly after the arrival of the family in Palestine. He is buried in Tel-Aviv.

The donor's maternal great grandfather, Adolf Daniel de-Beer was a prominent member of the Jewish community in Oldenburg Germany. Adolf's wife Matilde Rebecca was a convert to Judaism and held a regular identification card. This probably saved their lives. They remained in Germany during the war and survived the Allied bombings of Hamburg. They are buried in the Jewish cemetery of Oldenburg. Several decades after the war, a street was named after Adolf de-Beer in the Free City of Oldenburg. They had four children: Charlotte, Ilse, Erich and Hilde. Charlotte de-Beer Seligmann (b. 9/1/1906) and her husband, Herbert (b. 12/9/1905 in Stendhal) immigrated to Uruguay and spent the war in Montevideo, where Herbert died and was buried in 1950. Charlotte returned to Germany died in Oldenberg in 2000. Ilse Hirsch de-Beer (b. 7/22/1908) and her husband remained in Germany and were deported to concentration camps. Ilse perished in Ravensbrueck on July 20, 1944 and is bured in the non-Jewish cemetery in Oldenberg. Her husband also perished. Erich de-Beer illegally immigrated in 1937 to Palestine to join his sister Hilde and the extended de-Beer family who settled legally in Palestine in 1936. Hilde de-Beer was the donor's maternal grandmother. She married Helmuth Benjamin de-Levie, a Dutch subject. After she divorced her husband she moved to Palestine in 1936. Her daughter Hedwig Jocheved joined her there the following year. Helmuth Benjamin de-Levie survived the war in The Netherlands. Most of the rest of his family perished. Hilde later remarried Dr. Walther Risenfeld in Palestine.

Erich de-Beer joined the British Army and won his parole. He was taken prisoner on the Isle of Crete.He spent the rest of the war at POW camps in Germany ( Stalag XI V and Stalag VIIIb). In captivity as a British POW, he sent letters via the Red Cross to his parents in Germany. After the war, he was sent to England for recuperation. There, like many demobilized Palestinian soldiers, he married a young Jewish refugee in order to facilitate her immigration to Palestine. He later married his wife Hannah Rabinovic and settled on a farm in Kfar Bnai Zion where he is buried. Hedwig and Ernest Levy lived on a farm in Kfar Bnai Zion and had four children: Shulamit (b. 1950), Meira (b. 1951), Abraham (b. 1957) and Amos (b. 1957). In 1966 Irmgard de-Levie, Hedwig's half-sister who was born in Holland during the war, finally managed to contact her half sister with the assistance of the Israeli Embassy. Hedwig died on 11st of September 2003 and is buried in Kfar Bnai-Zion.