Three elderly Jews pose in the woods behind the Pensjonat Zacheta, outside the Otwock ghetto. 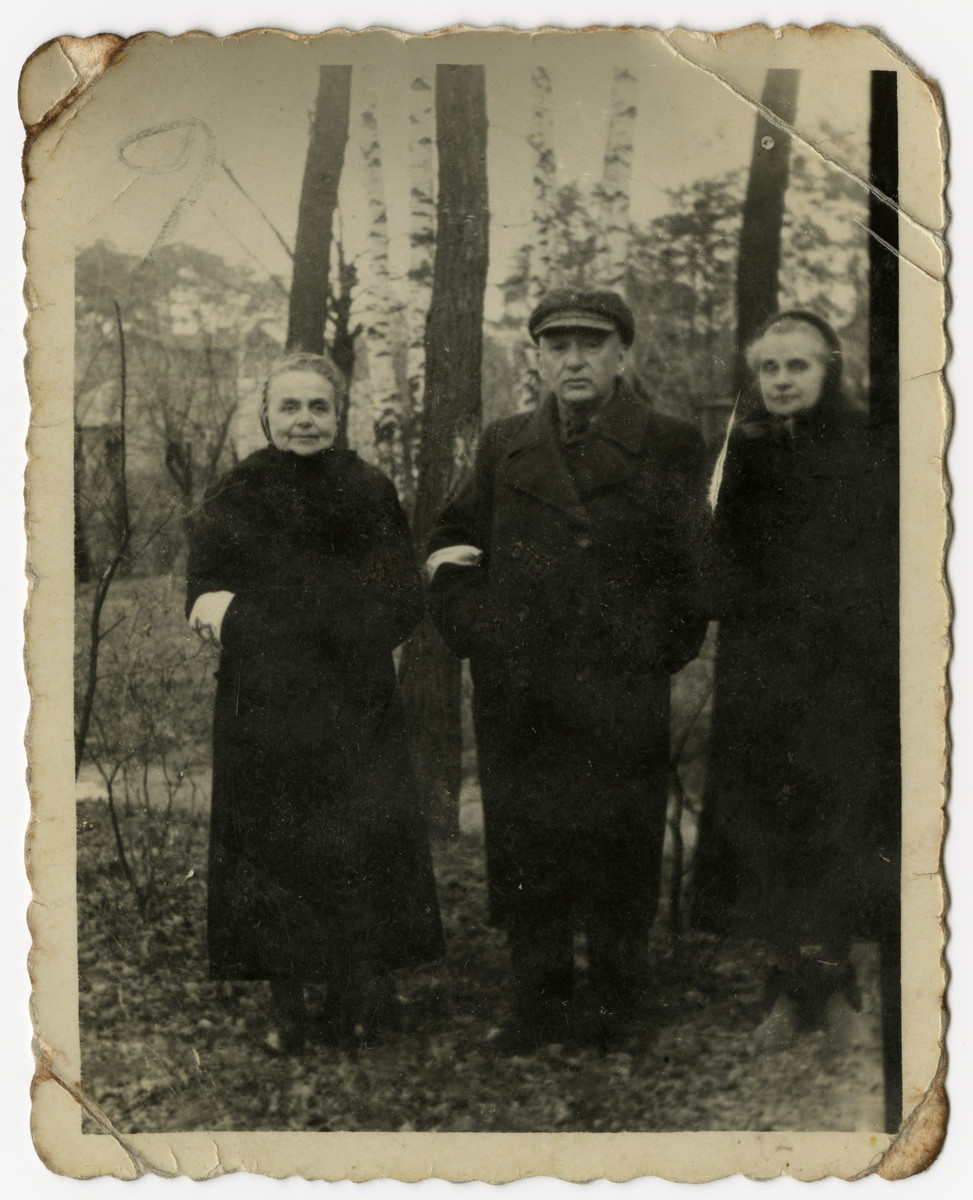 Three elderly Jews pose in the woods behind the Pensjonat Zacheta, outside the Otwock ghetto.

From left to right are Regina and Benjamin Szymin and a Regina's sister, Malka Flint. The pension was owned by the sisters, Regina and Malka.

Benjamin and Regina Szymm enclosed this ghetto photograph in a letter to their daughter Eileen Szymin Shneiderman in New York requesting help to leave Poland for the States.

Biography
Samuel Leib Sznajderman (S.L. Schneiderman) was the son of Abraham and Chana (Mandelbaum) Sznajderman. Samuel was born in Kazimierz, Poland in 1906 and was educated at the University of Warsaw. After graduating he began his career as a Yiddish journalist, poet and essayist. On March 25, 1933, he married Halina (later Eileen) Szymin. She was born on March 15, 1908 to Benjamin Szymin (b. 1880 in Shklov) and Rifka (Regina) Szymin (b. 1881, in Makow). Benjamin Szymin was a publisher of modern Hebrew and Yiddish literature in Warsaw, Poland. Her family lived in Otwok where they owned a guesthouse 25 km from the capital city. Halina had one brother Dawid Szymin (later David Seymour) born on November 10, 1911. In 1931 Samuel came to Paris where Samuel served as the Paris correspondent for a group of Jewish dailies in Poland. He returned briefly to Warsaw to marry Halina. The couple moved to Paris and then went to Spain to report of the Spanish Civil War. Halina’s brother, Dawid, also went to Paris in 1934 and began his career as a photojournalist under the pseudonym of "Chim." From there he traveled to Spain and photographed the Spanish Civil War. Halina returned to Paris where she gave birth to a daughter, Helen (later Sarid) in 1937. Chim came to the United States in 1939 and Eileen and Samuel joined him the following year. In 1947, Halina gave birth to a son, Benjamin.
Though Halina and Samuel escaped the Holocaust, Halina’s parents, Benjamin and Rifka Szymin remained in Poland. After the German invasion of Poland, they became imprisoned in the Otwock and Warsaw ghettos. They both perished in the Holocaust in 1942, probably either during the liquidation of the ghetto or in Treblinka.