A group of displaced persons poses for a group photograph, possibly at a monastery near Munich. 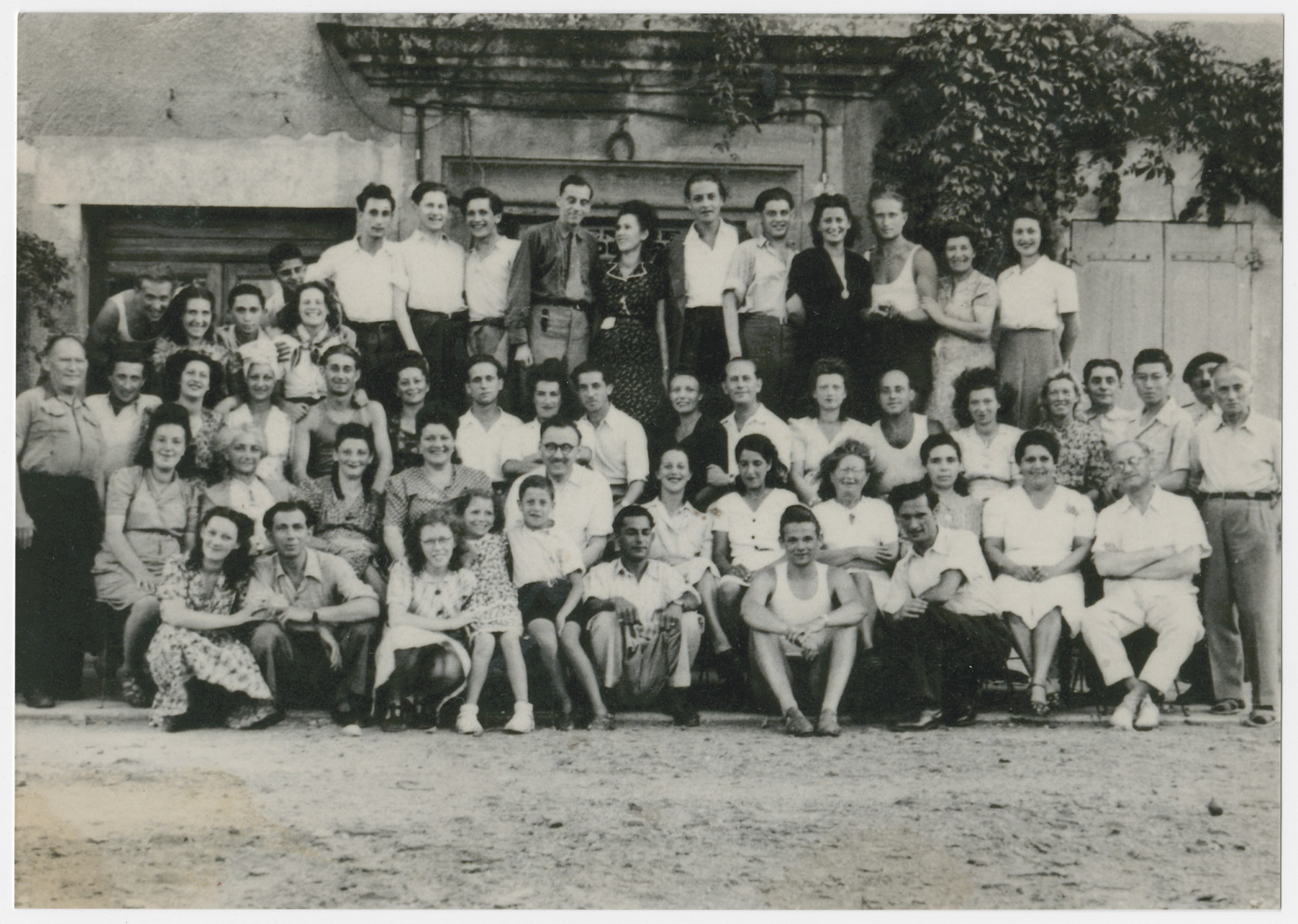 A group of displaced persons poses for a group photograph, possibly at a monastery near Munich.

Among those pictured is Helen Martel (second row, first from left).

The inscription on the back of the photograph reads, "Papiezka."

Biography
Helen Martel was born in Sosnowiec, Poland on June 7, 1927. She had two older sisters and one younger brother. Her family was religious and very committed to Jewish ideals. Her mother, who was in the business of selling fruit, would bake and distribute food to less fortunate families. Her brother was drafted into the Polish armed forces in 1936, and would serve in the town of Auschwitz. Her sister was a gifted student, and won an academic award from the Jewish school that she attended.
In September 1939, the Germans marched into Poland and WWII began. Helen's brother escaped to the Soviet Occupation Zone, but had to return to Poland due to illness. The rest of the family remained at home. On September 10, the Germans arrived in Sosnowiec, occupied the town, and set fire to the synagogue. The following morning, when Helen and her aunt emerged to search for food, they found the streets filled with bodies, and witnessed the hangings of young men. On September 15, the SS ordered all Jewish men between the ages of 15 and 70 to report to the town square. The men were then ordered to lie face down in the street. The SS fired a series of random shots, and subjected the men to beatings and torture. Those who survived the ordeal were sent home.
Soon, the Nazis began rounding up Jews in the streets. Helen's uncle Yokop, a professional writer, was sent to a concentration camp, but managed to escape. When the Nazis discovered his absence, they struck out at his wife Yenttle, dragging her from her home and kicking her to death. That same month, Jews were forbidden from leaving their homes between 6pm and 6am. They were required to wear an arm band with a Star of David, and another yellow patch on their backs. Several days later, the Gestapo began pulling families from their homes for deportation. Those who resisted were shot. Among those loaded into the freight cars were Helen's four uncles and their families. The Germans forced her brother Zelig to distribute loaves of bread to the deportees through the car window. At one window, he heard his nine-year-old brother-in-law calling out to him, "Zelig save me." At great risk to himself, Zelig managed to pull him out the window and throw him to the other side of the tracks.
Young people not yet deported were ordered to register for work permits. Helen was assigned to work in a factory, where she made backpacks for the German soldiers.
At the end of October, 1946, the first deportations began. Jews of all ages were forced out of their homes, and made to stand outside for two days, purportedly to have their papers stamped. However, some 8000 people's papers were left untouched, and they were loaded into freight cars and sent to Auschwitz. Among them were Helen's uncles, aunts, and cousins. She and her immediate family were allowed to go home.
In November 1942, all Jews from Sosnowiec were ordered into a ghetto, located behind a wall and barbed wire, in the poorest part of the city. Soon, Jews from surrounding areas also arrived. Living conditions were very difficult, with extreme over-crowding and little food. During that time, Gestapo agents stormed their room and dragged Helen away. She did not see her mother again. Helen was taken to a cellar with other girls her age, then the next morning forced into a truck. She recalls hearing her father's voice outside the truck, calling to her as tears streamed down his face. This was the last time she saw her father. She was then fifteen years old.

From the truck, she was loaded onto a freight train with about two hundred other girls. After two days on board, they arrived at the labor camp, Zillerthal bie Hirschberg. The camp consisted of five long, wooden barracks, surrounded by barbed wire. The girls were counted and each given a number, given rough uniforms and wooden shoes. They were housed sixteen to a room. From that point on, Helen worked twelve hours a day, in various factories, walking two hours each way to the site. They had little to eat-a cup of thin soup made of potato peels, and bread. On Sundays, they were given two potatoes and some horse meat.
In these conditions, Helen became sick and developed abscesses all over her body and on her thumb. Appearing ill was dangerous, as sick workers were regularly sent to the gas chambers by the camp Sturmbanfueher. A nurse in the camp felt sympathy for her, and assigned her to work inside the camp, washing sheets and floors. This brief reprieve allowed the visible abscess on her thumb to heal, though not those hidden under her clothing, and she was back to the labor site within two days.
During her first year at the camp, prisoners were allowed to write and receive letters. Helen recalls the last letter she received from her family. She was called in to the camp office, expecting the worst, but received only a brief note, saying that they were well. While in the office, the Commandant noticed her patched dress and, impressed with her sewing skills, sent a stocking with her to mend. In appreciation, the commandant gave her an apple, which Helen in turn gave to a dying woman, receiving a piece of bread in exchange.
On February 1, 1944, at 3am, camp officials ordered the girls of the camp to line up for a head count. Helen was pulled from the line to retrieve bread from the bakery and, at great risk to her life, managed to conceal one loaf. The girls were marched for an hour to another camp where, after the others fell asleep, she was able to eat the bread. She remembers it as a beautiful night under a full moon. The next morning, selections began. Half of the people were shipped out in rail cars, but Helen was taken with the second group on a march through the snow, rain, and wind. They were beaten and abused, with no shelter overnight but horse stables.
GAP OF ONE YEAR? OR SHOULD PREVIOUS DATE BE 1945?
On February 14, 1945, Helen was taken to Reinowitz bei Gablonz, along with many other transports. After a humiliating exam by a German medical examiner, she was qualified for work loading and unloading freight trains and laying rail tracks. The work and their overseers were brutal, and many died of hunger, exhaustion, and beatings.
Helen and the others heard rumors of the Soviet Army's advance, and with each advance the Nazis moved them further and further from the front, eventually arriving near the border of Czechoslovakia. Finally, on May 6, 1945, the Soviet Army arrived, the guards scattered, and Helen was free. She was seventeen, with no one to help her and nowhere to go. A kind young Czech man invited her to his family's farmhouse, along with her girlfriend Helen Fessel, where they were fed and spent the night comfortably for the first time in years. The following morning they decided to explore Prague, but were soon overcome with desire to return home to their families. With no means to pay for travel, they managed to stow away on a train for the seven-hour trip to Sosnowiec.

There, Helen was able to locate a building where other refugees were housed and fed with what little was available. The only member of her immediate family who survived was her brother, Zelig, but she found one cousin, Moishe Lewi and her sister-in-law Bluma Bagelman's two sisters and one brother. The next day, Helen met a former neighbor who provided her with room and board. She discovered that during the war her brother had paid a great deal to the superintendant, Kornacki, to protect her sister-in-law, Bluma, who was then pregnant. After taking all that Zelig had, Kornacki turned Bluma out, forcing her to give herself up. She was deported to Auschwitz, where she died.
Seized with a desire for justice, Helen went to the Kornacki's apartment, where she confronted Kornacki's wife about the jewelry, clothing, and furniture in the apartment that had belonged to her family. On leaving, she reported the Kornacki's to the police and requested that her family's possessions be removed and gave them to the local Children's Home for Orphans. She returned with the police to identify the items, amidst protests and verbal abuse from the superintendant.
Soon thereafter, Helen was warned by her neighbor that her life was in danger. Many Jews, including her cousin, had been killed after the war by anti-Semitic groups. In a few days, she left Poland to start a new life.