Close-up portrait of Josi Veidlinger [uncle of the donor] in an Hungarian labor battalion. 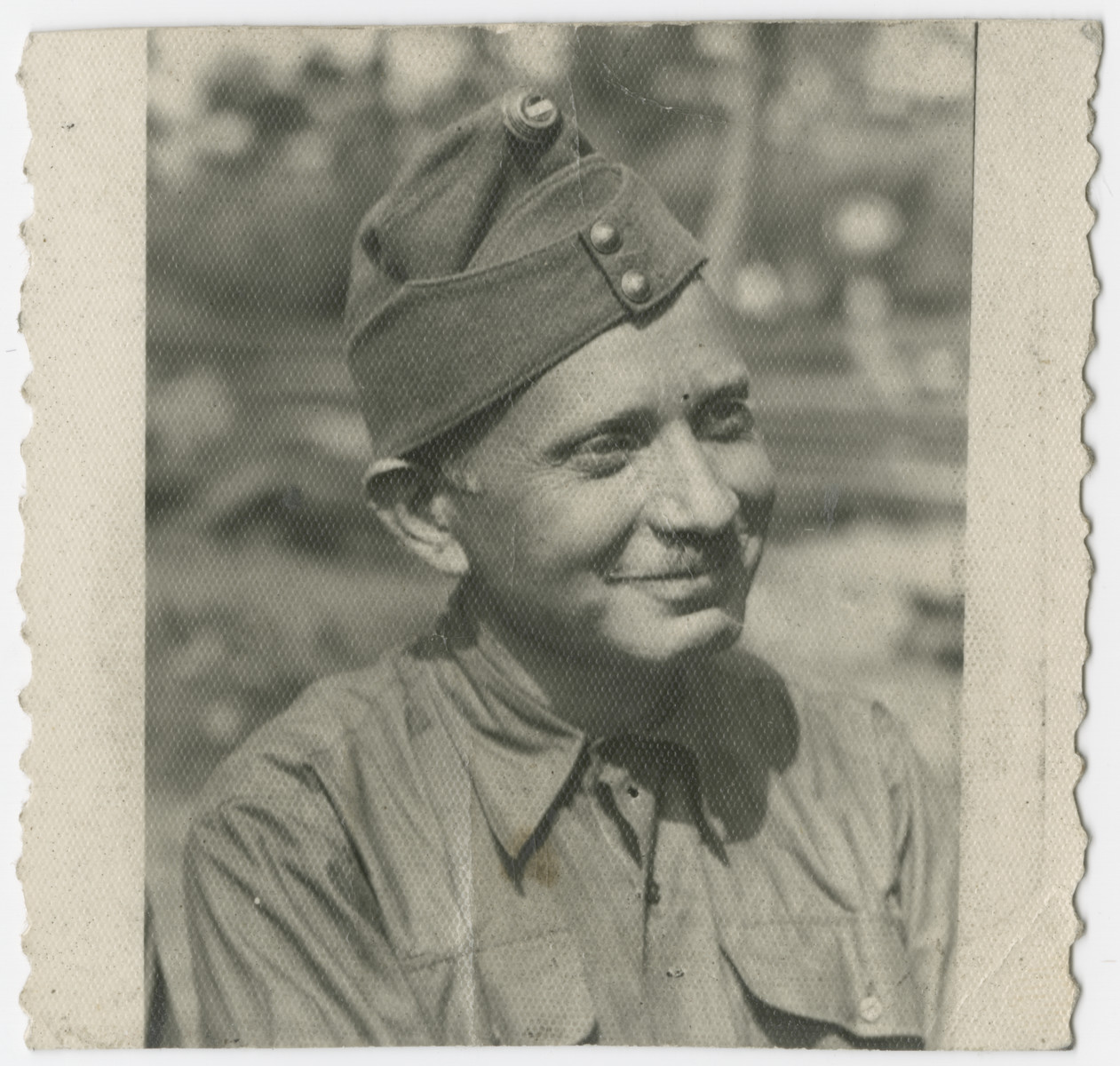 Close-up portrait of Josi Veidlinger [uncle of the donor] in an Hungarian labor battalion.

Biography
Otto Ferenc Veidlinger is the only child of Andrew (Andor Weidlinger, b. 9/10/1898) and Mary (nee Lorant, b. 1/16/1913) Veidlinger. Otto was born in October, 1936 in Budapest, Hungary where his father managed a shipping company. Mary's father Otto worked for Nasici, Hungary's largest lumber company. He died in 1915 when she and her younger brother were just infants. Mary's mother, Margit needed employment after her husband's death and became the company's bookkeeper. She later married the head of the bookkeeping department and director of the company, Ferenc Lorant. He died in 1935 so Otto was named after both his biological and adoptive grandfathers. Andrew was born in Kisgyarmat (now part of Slovakia) to Max and Fanny Weidlinger. He had two younger sisters, both of whom died of natural causes and a younger brother, Joseph (Josi). Andrew, as the oldest boy helped care for his younger brother and two orphaned cousins, Magda (Miriam) and Tiby (Moshe). Andrew moved to Budapest as a young man and was later joined by his widowed mother.

The Veidlingers lived one street in from the Danube in a modern area of Budapest in a third floor apartment. Otto attended a Jewish day school and had a full-time caregiver from Vienna.
In March 1944, the family returned from a Sunday excursion and noticed an usually large number of German soldiers on the train. When they got home they learned that Germany had occupied Hungary that afternoon. Within a very short time the first laws against the Jews were announced. Andrew could no longer officially manage his business . It was formally put under control of an Aryan supervisor, but Andrew continued his same work unofficially. Jews had to wear yellow stars and could only shop at designated times. After Germans decreed that Jews needed to turn in their jewelry, Otto and his father hid all their valuables in a metal cigar box which they buried in the earth. (They successfully recovered it after the war.) Soon afterwards deportations began. Otto's uncle Joseph went to a labor camp. Though Andrew also was called up, he was exempted for medical reasons. He then volunteered to work for the Red Cross. Otto's mother Mary was sent to a women's labor camp for women to dig trenches around Budapest to trap the oncoming Russian tanks. She spent several weeks with a group of Jewish women under terrible circumstances. None of the women had any experience with hard physical work and they were lined up every morning and the guards told them that they would shoot every tenth person if they did not produce sufficient results. She returned home after a few weeks only to be rounded up a second time. This time, while the women were marched on the street, she stepped into a shoe store when no-one was looking and later safely returned home.

As the situation became more precarious, Andrew obtained various protective papers. He had an identification card from the Red Cross, but also obtained citizenship papers from San Salvador [sic] which helped exempt them ghettoization and deportation. Otto and his parents remained in their own apartment throughout the occupation, though the building superintendent belonged to the Arrow Cross. One morning Otto woke up hearing a lot of commotion outside and saw a crowd of Jews standing in the street, carrying suitcases and heavy bags. His father instructed him to eat a big breakfast and then brought him outside to join the assembled. The building superintendent made sure they left their apartment. However, Andrew did not bring any belongings with him. They began marching down the street with the other Jews, but when they passed by an open gate, Andrew pulled his son into the gateway of the house. They hid behind the staircase and removed their yellow stars. Once the street was all clear, they calmly walked out in the opposite direction to the home of Andrew's mother which was in an area that had not yet been evacuated. Otto stayed there for a few hours, and then his father brought him to a Red Cross children's home. The shelter, located in a small apartment with inadequate sanitation, housed perhaps 50 children of all ages. After a day or two, Andrew heard rumors that the shelter would be evacuated, so he returned to fetch Otto. He then decided they should return to their own apartment, since provided that the superintendent wouldn't give them away, no-one else would suspect them of hiding in their own apartment. Soon afterwards, Mary also returned home and rejoined them. As the bombing of Budapest intensified, the family moved to the cellar. By then Budapest was under siege and the family had very little food or heat. Andrew's hands and feet became swollen from malnutrition. However he continued his work for the REd Cross helping to organize food relief activities. Mary celebrated her birthday on January 16; the same day Russian troops liberated Budapest. While they were in the cellar, German troops moved into the apartment and used it as a barrack. Towards the end they asked my Andrew for civilian clothes and a place to hide; Andrew refused. and the German soldier quietly apologized for asking.

For the next year, Otto remained in Budapest during which time he witnessed the crowds gathering in the street to witness the execution of Ferenc Szalasi, head of the Arrow Cross. Soon afterwards, his father decided that he should not remain in Hungary. He brought Otto with him on a business trip to Switzerland. However, since Otto did not have a separate visa, the border guard would not permit him to enter the country. Instead he agreed to allow Otto to live with him and his four children until Andrew sorted out the paperwork. Otto remained with the guard's family for a month and then legally entered the country. He attended a Swiss boarding school for three years while his father built his business in Switzerland, Holland, and England. Eventually Otto, his father and paternal grandmother all immigrated to Canada. His mother and maternal grandmother remained in Budapest. Because of the Iron Curtain his mother only managed to leave Hungary ten years later. Otto Veidlinger later attended medical school and became a neurologist. He married and has two sons and a daughter.

Though Otto, his parents and two grandmothers survived, his two uncles both perished. Mary's brother Gyuri (b. 1916) disappeared into an unknown concentration camp. Andrew's younger brother Joseph (b. March 12, 1903) went from a Hungarian labor battalion to Buchenwald where he died shortly after liberation. Andrew's two cousins Magda and Tiby survived Auschwitz and moved to Israel.