Portrait of the Elbaum/Nusbaum family in their home in Brussels. 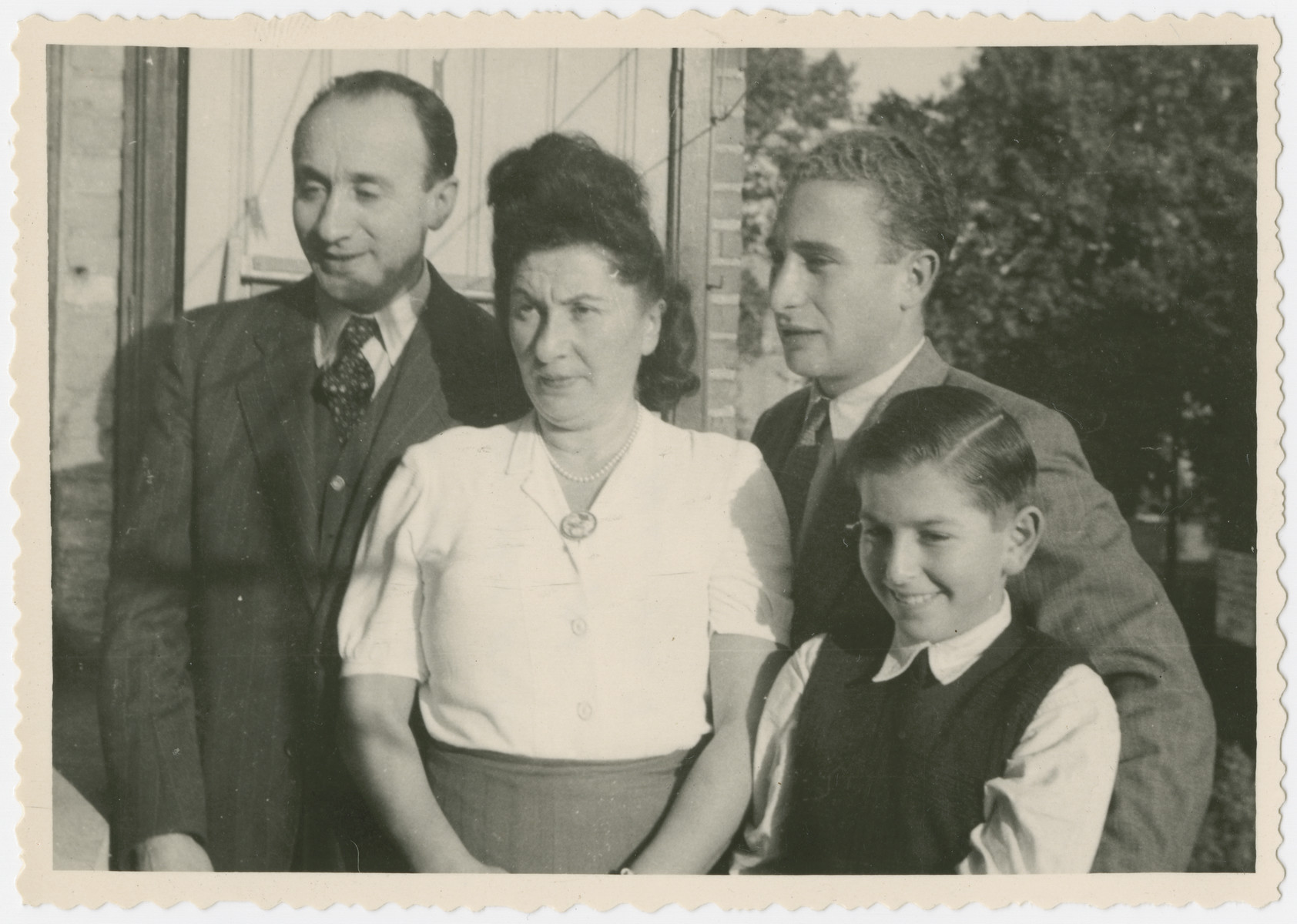 Portrait of the Elbaum/Nusbaum family in their home in Brussels.

Biography
Dr. Mark Nossbaum (born Shlomo Baruch Nusbaum) is the son of Abraham Nussbaum and Regina nee Landau Nusbaum. Mark was born on October 10, 1935 in Sandomierz Poland where his father owned an electrical supply store. Mark had one brother Aaron who was four years older. His paternal grandparents Yaakov and Zippora Nussbaum had five children: Melech (who died before the war), Abraham, Joseph, Chana and Frumcha (Frieda). Joseph and his wife Chana immigrated to Palestine where their son Tzvi was born. However, conditions there were difficult and they returned to Poland in 1939. The first German troops entered the city shortly after the September 1 invasion. In 1940 the Germans rounded up several of the most prominent citizens in the city, including Abraham Nussbaum. He first was imprisoned in a former castle and then deported to concentration camps -- first to Mauthausen and then to Buchenwald where he perished the following year. Tsvi's parents, Joseph and Chana Nussbaum, also perished early in the war. Joseph and Abraham's sister Chana and her husband Shulem then adopted Tzvi. In 1942, the situation for Jews became increasingly dangerous, and the remaining Nusbaum family - Regina, Aaron and Mark, Chana, Shulem and Tsvi and Frumche - left together for Warsaw. They hid together in an apartment on the top floor of a building owned by a Polish man named Romek. They remained there from July or September 1942 until July 1943. The Nussbaums stayed in a secret room that could be entered through the back door of an armoire. Regina kept jewels and money hidden in her shoe which she used to support the family. Frumcha (Frieda), who looked Polish, served as their liaison with the outside and went shopping for the family. Eventually she was caught, taken to Pawiak prison and killed. After the liquidation of the Warsaw ghetto in March 1943, their situation became more desperate. That summer, rumors spread that the Germans were looking for foreign citizens to be exchanged for German citizens trapped in other countries. Anyone with foreign papers could report to the Hotel Polski to take part in the exchange. Though the Nussbaums feared that this was just a trap to capture Jews in hiding, they were desperate and responded even though it meant voluntarily going out of hiding. Tzvi had a real Palestine certificate which also covered his new parents Chana and Shulem, and Aaron as well. Regina found another Palestine certificate that had belonged to the Moskowicz family who had already perished. The child on the certificate was named Marek -- the name Shlomo Baruch kept for the rest of his life. With these papers the family reported to the Hotel Polski. They then received a pass allowing them to go back to their hiding place to retrieve their belongings. After a few days, on July 10, they were brought by passenger train to Bergen-Belsen. The "foreigners" were housed in separate barracks and exempt from forced labor. However, they had to stand for roll call several times a day. To pass the time, the prisoners organized lectures, music and classes for the children. As the war wound down, the Germans decided to evacuate the foreign prisoners in advance of the Allies. On April 7, 1945, Mark and his family again boarded a passenger train. Because of the fighting, the train meandered and came to a stop near Magdeburg. Rumor spread that the Germans planned to drown all the passengers in the Elbe, but before that could happen on April 13 the passengers were liberated by American soldiers, led by a Jewish soldier named Cohen. After a few months of recuperation in Hillersleben, Mark and his mother moved to Antwerp, where Mark attended the Takhemoni school. Aaron went to Israel with Youth Aliya to join a Shomer Hatzair Hachsharah. In 1946 Regina remarried Chil Elbaum, another survivor from Bergen-Belsen and the train. He became a successful diamond agent and would have been happy remaining in Antwerp, but Regina was determined to come to Canada to reunite with her brothers who had immigrated before the war. Regina, Chil and Mark arrived in the port of Halifax on May 15, 1948, the same day that the State of Israel was born. Mark completed high school and college and became a successful dentist. After war Chana and Shulem went on to have two more daughters: Ruth and Alice born in Palestine after the war.