Commander Yehuda Bielski writes in his notebook while smoking a cigarette. 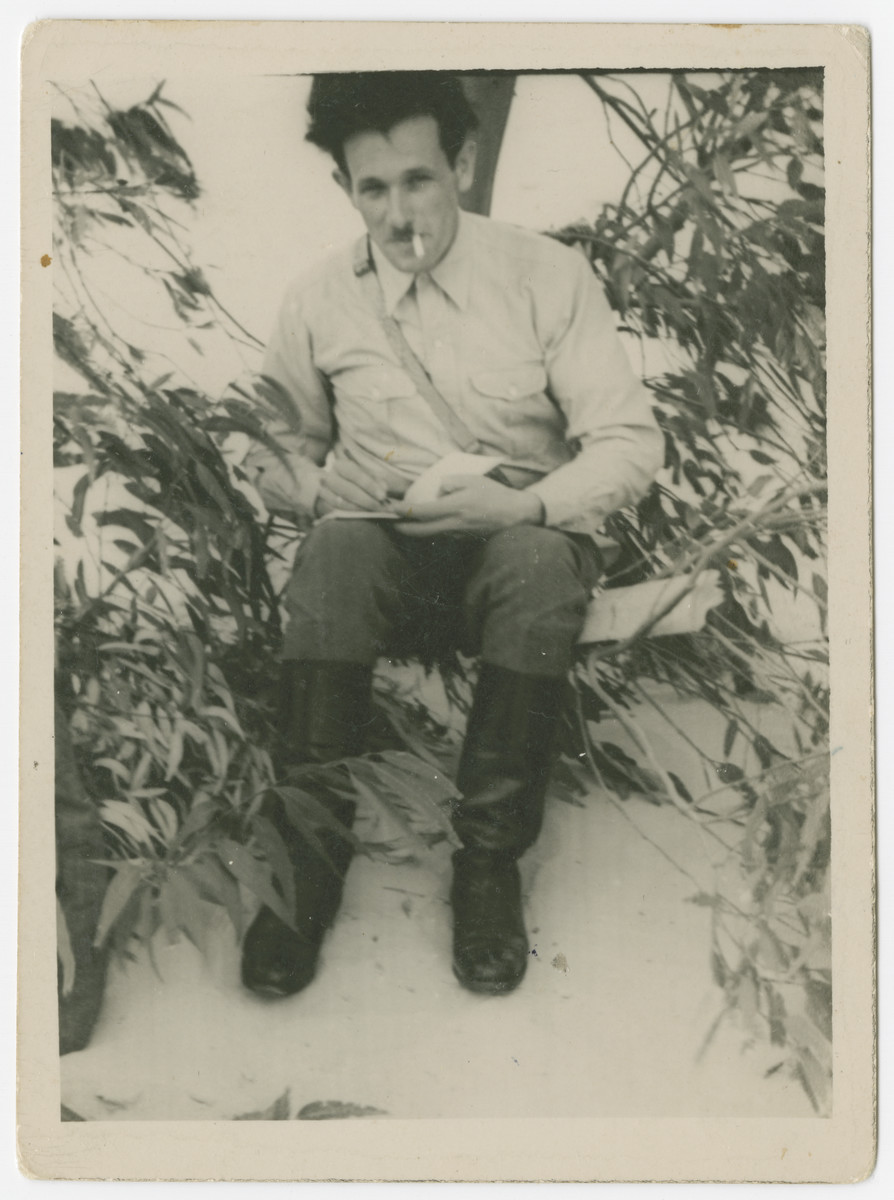 Commander Yehuda Bielski writes in his notebook while smoking a cigarette.

Biography
Yehuda (b. April 16, 1909) was the youngest child of Zelig and Shifra (Israelit) Bielski. He was born in Nowogrodek, Poland, where his father owned a glazing business. His mother died from typhus when he was nine years old. Yehuda's three brothers, Max, David and Jack, immigrated to the United States shortly before World War I. His two sisters, Tyba and Chava, were married with children and lived in Nowogrodek. Another sister was killed as a teenager before the Holocaust after being hit in the head with a rock. A lieutenant in the Polish army, Yehuda was badly wounded while fighting at the front during the German invasion of Poland in September 1939. He made his way to a Warsaw hospital. Barely recovered, he escaped an SS hospital sweep for Polish officers and Jews. He maneuvered his way back home to Nowogrodek which was under Soviet occupation. In June 1941 (Operation Barbarossa) Germany crossed the Russian/German demarcation border in Poland and invaded Belorussia.

Some months later, Yehuda's first cousin, Tuvia Bielski, fled to the forest with a small group of family members and friends. From the forest he wrote a letter to Yehuda who was a prisoner in the Novogrudek ghetto delivered by a Christian friend, Konstantin Koslovsky. He asked Yehuda to bring his wife, a few potential fighters and join him in the forest to build something together (The Bielski Brothers by Peter Duffy, Harper Collins Publishers, 2003, p. 81). He needed Yehuda's military expertise to form a partisan group. Yehuda was sometimes called the fifth brother because of his close relationship to his cousins. Yehuda immediately implemented the escape plan he had been thinking about for some time and successfully led nine people through the forest to the Bielski camp. Owing to his prior military training and experience, Yehuda assumed control of military operations. However, as a former Polish officer, the Soviets considered him a wanted enemy to be shot upon capture. He nominated his cousin, Tuvia, most capable of negotiating all future matters with the Soviets, to be the leader of the Bielski partisans.

Yehuda had a reputation for rescuing Jews from guarded ghettos. One of his most dangerous and consequential missions, at Tuvia's request, was to assemble a selected band of partisans and enter the Novogrudek ghetto to get the Boldos, the parents of Sonia Boldo, a Bielski partisan who would later marry Tuvia's brother, Zus. The partisans rescued the Boldos and some others, and returned to the forest where everyone survived the Holocaust. Later in Israel, Mr. Boldo acknowledged that Yehuda brought them out alive.

In 1943 Yehuda's wife, Ida, was killed in a German ambush; her body was discovered in the forest lying face down over her revolver, shot in the back. Later that year, Yehuda met and befriended Lola Hudes who had recently joined the Bielski partisans.

Lola (b. December 25, 1920), the daughter of Herschel and Necha (Goldblit) Hudes, had come a long way from her home in Lodz, Poland, to the forests of Belorussia. Herschel was a prosperous and sophisticated businessman, the owner of a distribution business. Raised in comfort and style, she had three brothers and two sisters: Stanislaus (Szmuel, b. 1909), Simon (Shimon, b. 1911), Lolek (Eliezer, b. 1918), Eva (Chava, b. 1907), and Rose (Rachel, b. 1913). When the Germans entered Lodz in 1939, Lola fled east. Several months later, Stanislaus and his wife, Lena, also fled east. They all met up in Stolpce, Belorussia, but were soon trapped in the ghetto. Lola worked as translator (German, Polish, Russian) and typist for the German kommandant. After several "aktions" in the heavily guarded Stolpce ghetto and impending final liquidation of the ghetto, Lola escaped. In the darkness of night she crawled on her belly under barbed wire avoiding the searchlights which lit up the field. Slowly she inched her way into the forbidding, strange forest.


Lola eventually joined two small, primitive partisan groups; often hungry, they slept in ditches covered by leaves. Later she joined the Kessler partisans deeper in the forest; they were a larger, well organized fighting group with a dynamic leader. Lola was not a fighter, but Kessler considered her language skills useful. The Kessler partisans eventually merged with the Bielski partisans (Lola's fourth partisan group). However, handing over personal belongings like underwear and other items of value was the price of being accepted into the Bielski camp.

In 1944 the Russian army on its way to Berlin liberated Belorussia. The partisans left the forest and went their separate ways. Yehuda and Lola married. In Novogrudek the Soviet NKVD finally caught up with Yehuda. He was interrogated and warned. As a former Polish officer, he understood his days were numbered. Atop a coal train heading west, Yehuda and Lola escaped. In Hungary they joined a group of survivors on their way to Palestine. In Italy they boarded a ship bringing "illegal" immigrants to the Jewish homeland. They avoided the British blockade and arrived in Palestine in 1945.


Yehuda joined the Irgun, the Revisionist underground army formed to defend Jews and push the British out of Palestine. A daughter, Nili (Leslie), was born. Lola's brother, Eli, returned from Siberia where he had survived the Holocaust and the two were reunited. Yehuda was commissioned an officer in the IDF and fought with military distinction in the 1948 War of Independence. Once again he was wounded in battle, but survived complicated surgery. A son, Yigal (Eric), was born. In 1952 the family came to the United States and lived in Manhattan, New York. Yehuda became a successful businessman; Lola became a painter. Two more children, Harriet (died in infancy) and Stuart, were born. In the United States they were known as Julius and Lola Bell.

Most of Yehuda's and Lola's immediate families perished in the Holocaust. Yehuda's father and both sisters, along with their husbands and five children, were shot into the pits outside Nowogrodek during a German massacre in 1942. Lola's mother starved to death in the Lodz ghetto in 1943 after Lola's father was killed in the ghetto earlier that year. As for her siblings, Eva was killed with her husband and three children in the Majdanek death camp in 1943; Rose disappeared while attempting to escape from the Lodz ghetto; Stanislaus was beaten to death at SS headquarters in Stolpce in 1942; Simon remained in the Lodz ghetto with his parents and was killed in Auschwitz in 1942.