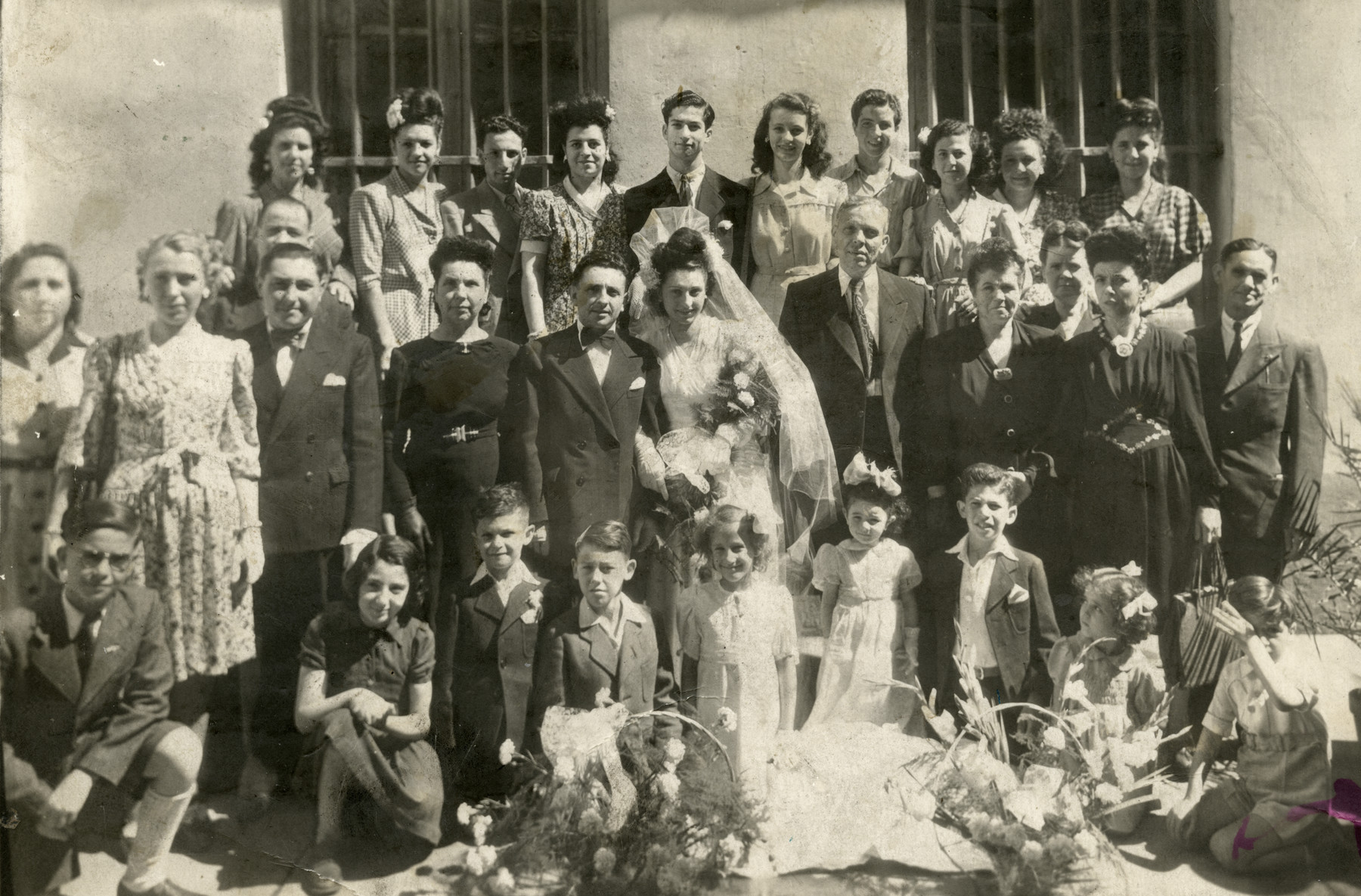 Shimon and Regine Romano are to the right of the bride. The groom's mother (a widow) is standing next to him. Pictured standing in the center are Leon Levi (a cousin) and the donor, Camille Romano.

Biography
Tamar Enkaou (born Camilla Romano) is the daughter of Shimon Romano (b. November 6, 1899) and Regine (Malka) Souami (b. September, 1896). Both of her parents were born in Izmir, Turkey. Their marriage was arranged by a matchmaker and they married in April 21. Their oldest daughter Rachelle was born in Izmir on February 11, 1923. Soon after Shimon left for France to look for work as did many other young Turkish Jews. He found a job in the Berlier truck factory and then sent for his wife and daughter. Their four younger daughters were all born in Lyon: Suzanne (b. September 1, 1924), Esther (b. September 10, 1926) and Julliette (b. May 4, 1928) and the donor, Camilla (b. July 28, 1932). Regine had a sewing atelier in Turkey, but she did not work in France. The family lived across the street from the Turkish synagogue. The family spoke Ladino at home. Shimon learned French, but Regine it only haltingly. In May 1940 Germany invaded France, but Lyon was situated in the so-called Free Zone under the leadership of Petain's Vichy regime. Though Petain instituted antisemitic legislation, the Romano's did not face true danger until 1943. Tamar's sisters obtained false paper s, but Tamar was too young and did not need them. In 1943 the Vichy police came to pick up Shimon, and Tamar insisted on going to the police station with him. They stayed there for the night. Shimon was then incarcerated in Fort Montluc but then released after two weeks. Tamar attended the local school until the beginning of 1944. One afternoon the principal called and told her she would be going to the children's home in Taluyers for a month or two, a children's home where she would be safer. After a short time in Taluyers, Tamar missed her parents and returned home on her own. Her father was taken aback and asked her what she was doing there. That night their neighborhood was bombarded. Shimon woke the family early and told them they needed to leave almost immediately. They took a bus to a small village where the mother-in-law of Tamar's older sister Rachelle had a summer home. They later learned that one hour after they left, the Gestapo encircled their entire neighborhood and rounded up all the Jews for deportation. The Romanos remained in the village until the end of the war when they returned to their apartment on Rue Montesquiex. I had been ransacked and was in terrible condition. The Rabbi of their synagogue had been deported. Eventually with the influx of Algerian Jews to France a new Sephardic rabbi was installed. After the war Tamar worked for the Oeuvre des Secours aux Enfants in various children's homes. She married and immigrated to Israel in the early 1950s. She has 5 children, 27 grandchildren and 32 great grandchildren.