The Emanuel family gathers for a family portrait the preceding Shmuel's bar mitzvah. 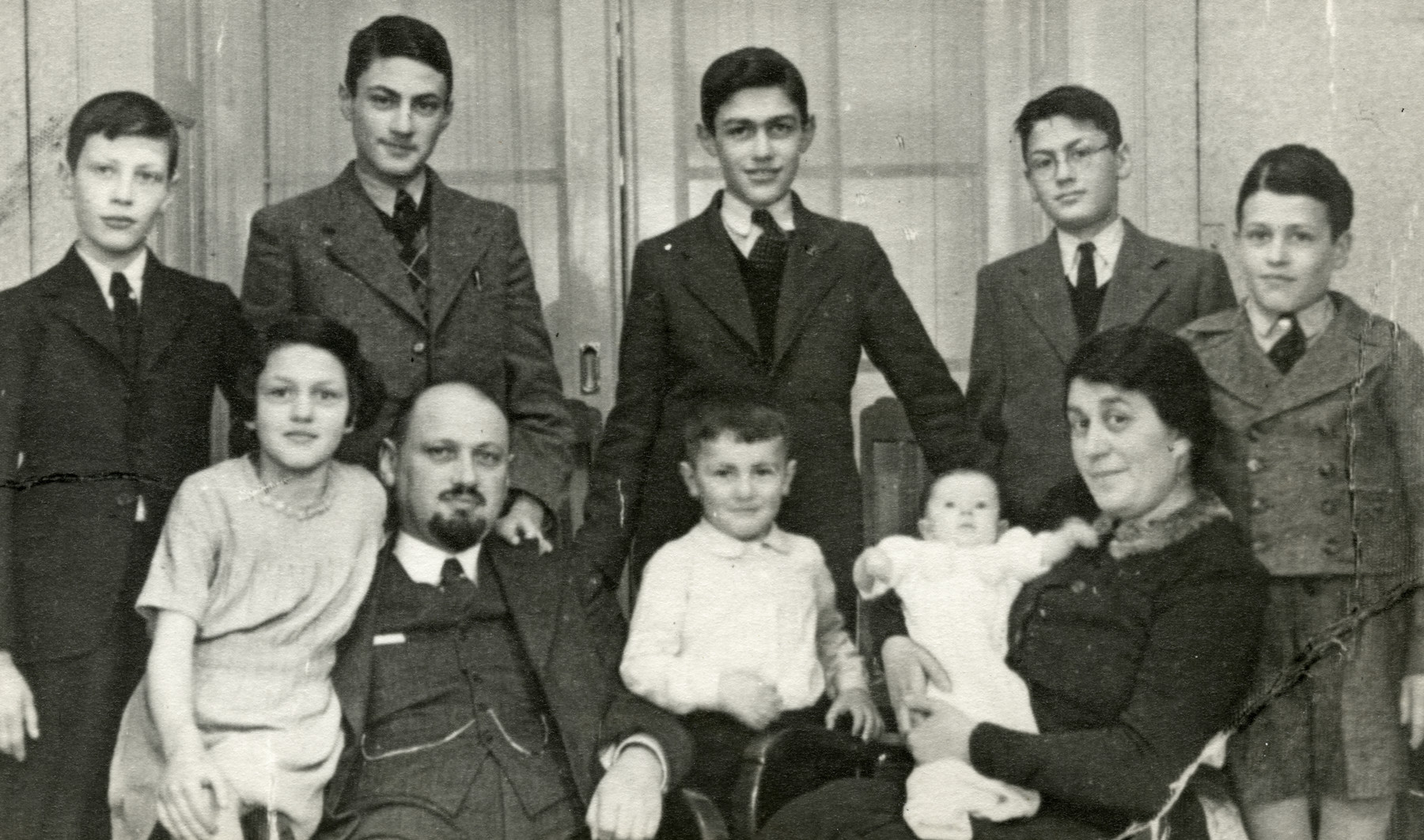 The Emanuel family gathers for a family portrait the preceding Shmuel's bar mitzvah.

Biography
Baruch Emanuel is the son of Mordechai Marcus Emanuel (b. 1894) and Chana Martha Goldschmidt (b. 1901). Baruch had four older siblings: Elchanan (b. 1923), Shlomo (b. 1924), Yona (b. 1926), Shmuel (b. 1927), and a twin sister Bella (b. 1929), all born in Hamburg, Germany. The family was very religious. Six months following the Nazi rise to power, the family decided to move to The Netherlands. First they lived in Utrecht, and in 1936 they moved to Rotterdam. In Holland, Mordechai and Chana gave birth to two more children, Shalom (b. 1933), and Bitya (b. 1939).
In 1940, Jews who had previously held German citizenship were required to leave the western sector of The Netherlands for the central and eastern regions of the country. The Emanuel family decided to move back to Utrecht. In 1941 the Nazis banned Jews from attending school so Shlomo, Shmuel, and Yona found jobs. Yona worked at a shop where he learned to operate light machinery. Since Jews were forbidden to use public transit he had to walk about an hour to get there every day. The following year, the Nazi began deporting Jews in the Netherlands. Shmuel and Yona went into hiding in the suburbs of Utrecht. After about two weeks, the arrests, and deportations temporarily stopped, and the boys returned home and to their jobs. Yona's shop manager, Mr. Bosch, was very sympathetic to the Jews. He gave Yona private school lessons. On nights that seemed especially dangerous, Mordechai and sometimes Elchanan and Shlomo hid in the home of Mr. Bosch. In the spring of 1943, Mordechai and Chana decided the entire family should to go into hiding. A gentile family friend, Mr. Rijkse, knew people in the Dutch underground and arranged for various hiding places. Mordechai, Chana, and Shalom, stayed with Mr. Rijkse and his family. Bitya was taken by a childless couple living in Aalfen Aan De Rijn, a tiny village outside Utrecht. Everyone else stayed in the attic of a school where Mr. Rijkse worked as a janitor. He brought the children food and water daily, but the living conditions in the attic were bad. The children had to remain very still and quiet so that people in the building wouldn't hear them. To pass the time, they studied Torah and played chess.
Eventually, Mr. Rijkse felt that the attic was unsafe, and he found a new hiding place. Yona joined Mordechai, Chana, and Shalom in Mr. Rijkse's house. Everyone else stayed in a new hiding place. Mordechai, Chana, Shalom, and Yona, relocated stayed for about a week at the home of the Van Der Vlist family lived. One day, Smorenburg, a member of the Dutch Nazi Party came to Mr. Rijkse's house and found the family. He arrested everyone and took Mr. Rijkse in for questioning. Mr. Fritz Elzas, one of the leaders of Judenrat, was on good terms with Smorenburg. After learning of the Emanuel family's arrest, he made them false Paraguayan passports and gave them to Smorenburg. Elzas reminded Smorenburg that since the family owned a foreign passport, the decrees issued by the Germans against the Jews did not apply to them. The plan worked and Smorenburg let them go.
Now that they had Paraguayan passports, the family returned home. However, one month later the Gestapo arrested them and brought them to the Westerbork transit camp. However owing to their Paraguayan papers, the family was not sent to Auschwitz. Instead on February 2, 1944 they were sent to a section of Bergen-Belsen specifically for foreign nationals. They lived and worked under horrible conditions in the camp. By the end of 1944, Mordechai had grown very ill and ended up passing away in the camp from malnourishment and poor health. Shortly after, in 1945, Elchanan, age 21, passed away. Shalom, the youngest brother also died in 1945, only two weeks before his 10th birthday, and Bitya died from malnourishment eight days after Shalom. At the end of 1945, as Allied liberation forces approached Bergen-Belsen, the Germans began evacuating the camp sending the prisoners further east. The Emanuels tried to avoid the transport, but the Germans sent Chana, Baruch, Bella, and Yona into the cattle cars. Shlomo was in critical condition and was allowed to stay in the camp, and Shmuel was granted permission to stay with him.
Chana died on the train at the age of 43 due to malnutrition and disease. As the three children continued forward on the transportation train, the Russians came and liberated them near the village of Troebits in the southeastern sector of Germany. The Russians brought them into town and gave them shelter in a group of buildings. Many people died during the time. Yona was taken to a makeshift field hospital that was set up by the Red Army. A few weeks later, the U.S. Army Medical Corps came to the Troebits and transferred everyone to Leipzig, a city in Eastern Germany.
Shmuel and Shlomo were liberated by the British, but Shlomo died only two days after liberation. Shmuel was taken to a German army camp not far from Bergen-Belsen to receive treatment for his own illnesses. After his health started to improve, the British repatriated him back to the Netherlands where he recuperated in a makeshift clinic established in a Catholic Monastery in Nymegen.
Baruch and Yona left Leipzig, Germany on an American Medical Corps train to Maastricht, a city in southern Netherlands. Baruch was in extreme critical condition. He was then transferred to the Jewish hospital in Amsterdam at the end of November 1945. When he was moved there, Yona decided to leave Maastricht for Veenendall to stay with the Van Essen family. Once Baruch's and Shmuel's health improved the two of them and Bella joined Yona in Veenendaal. They lived with the Van Essen family for five years before immigrating to Israel.