Internees in Cyprus celebrate the wedding of a Polish born bride and a Tunisian born groom. 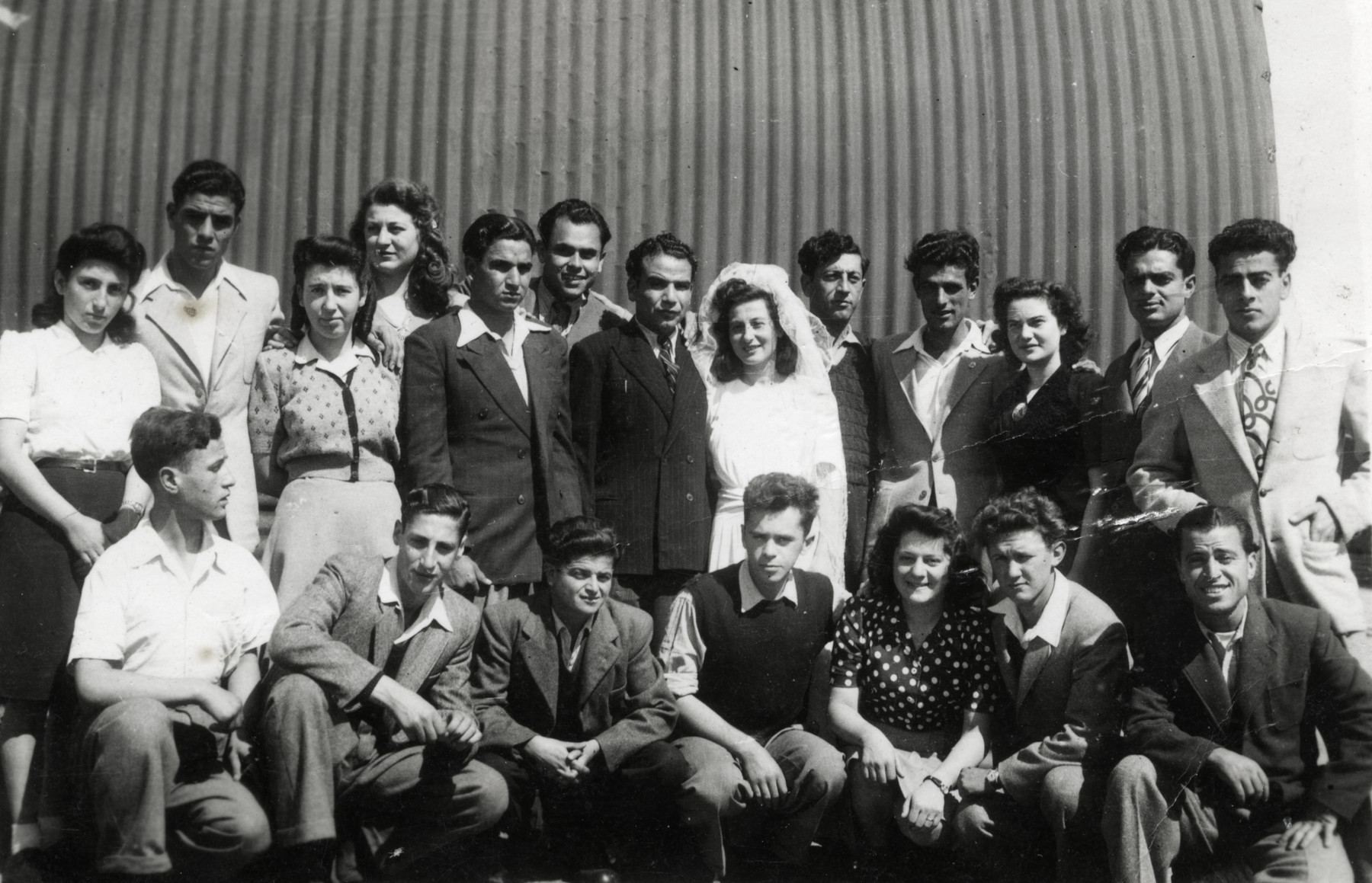 Internees in Cyprus celebrate the wedding of a Polish born bride and a Tunisian born groom.

Biography
Raoul Avraham Tayar was the son of Daniel (b. 1895) and Simcha (b. 1900). He was born on January 29, 1924 in Gabes, Tunisia and had four younger siblings: Rene (b. 1926; he died young from disease) Roger (b. 1928); Ramona (b. 1930) Ronny (b. 1933). Daniel was an auto mechanic and owned a few taxis together with his brother. He died in 1940 of a heart attack after a car accident. Raoul studied in a French public school. The family was orthodox and their house was kosher. His grandmother Missa was a prominent midwife and delivered both Jewish and Arab babies. Eventually Raoul's mother Simcha helped her delivering children. In November 1942 the Germans invaded Tunisia and imposed various anti- Jewish laws. Raoul took his high school matriculation exam that year. Since a quota was imposed on Jewish students, Raoul assumed he would not be allowed to graduate. However, since his name was not specifically Jewish he passed his graduation exam. His brother Roger was caught in the street and sent to forced labor but managed to escape. Afterwards his mother would not let Raoul leave the house. His grandmother, Missa, who lived with them, continued to work as a midwife throughout this period. Since her services were in demand no one paid attention to the fact that she was Jewish. She died in Gabbes at the age of 63.

Jewish youngsters built bunkers on the roads to hide from British bombings. Raoul, his siblings and mother hid there. His mother would go home to cook and bring them food. A bomb fell on their home and hit their bathroom and their well which somehow did not explode.

In May 1943 the Allies captures Tunisia, and the racial laws were lifted. After that Raoul began to work as a teacher to help provide for the family. He taught in Gabes until he was sent to an island where there were only Arab students. He did not want to remain there and returned to Gabes where he began to organize the Jewish youngsters into Betar Zionist youth clubs. He organized summer scouting camps as well. In 1946 he went to Tunis and became secretary of the Betar movement. He then made arrangements to immigrate to Palestine. A representative from France told him that there space on a boat leaving for Palestine from Marseilles. Raoul had three days to organize the departure of a large group of Tunisian youth. Raoul, together with thirty other youngsters, his mother, sister and brother boarded the Ben Hecht in February 1947 arriving in Haifa after a five day trip. However, they were caught by the British, no allowed to disembark and sent to Cyprus.

Hilda Kreiser and her sister Anny were on the same ship. They had been living in Grenoble, and when Hilda learned there was a place for them on this ship she packed her rucksack and took Anny out of school. They left Grenoble by train for Port du Bouc and boarded the ship. Since Hilda spoke both French and Yiddish she translated among the passengers and thus met Raoul. His mother approved of the match. They became engaged and wed on May 29, 1947, the first couple in their group to marry. Hilda's wedding dress was made of fabric a friend had brought it Germany for her own daughter. Raoul's sister wrapped it around her and pinned it. The veil was made from hospital gauze and the flowers from paper. The rabbi who married them was also a refugee. He gave them a slip of paper saying they were married. Hilda later had to present herself at a Rabbinate council who presented her with an official document. She gave birth to a daughter Pnina in Cyprus on February 17, 1948.

Two months later, on April 29, 1948, the Tayars arrived in Israel. Raoul went to work in the port of Haifa. He served as a member of the Israeli Knesset from 1964 to 1972 and afterwards studied law. Hilda studied Hebrew in Cyprus. She also had studied nursing in Grenoble and worked in Haifa after her children began school. Hilda and Raoul had three children. Raoul passed away in 2011They have 9 grandchildren and 7 great grandchildren.