Identification card of the Polish Residents Association in China issued to Jankiel Rabinowicz. 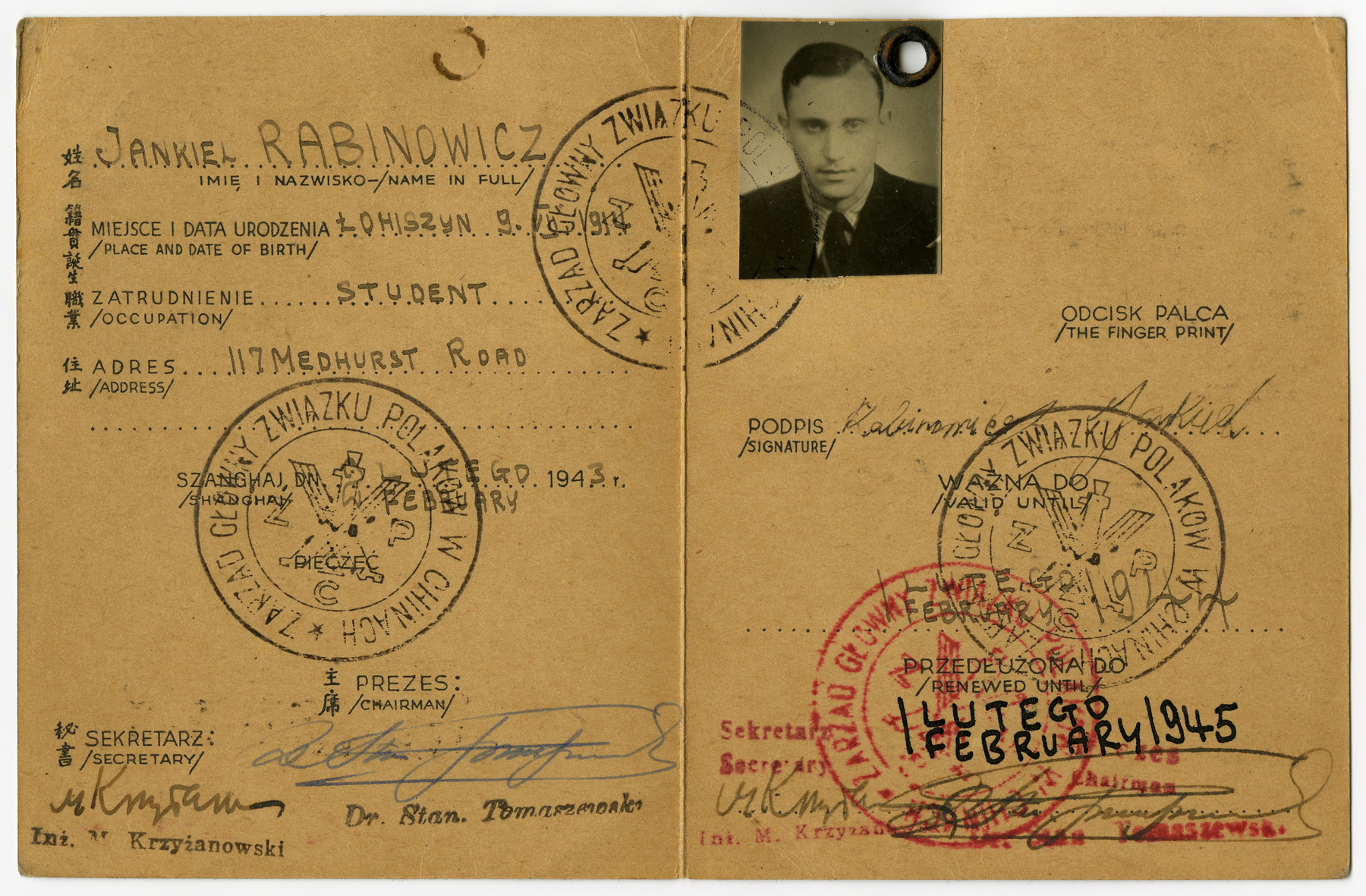 Identification card of the Polish Residents Association in China issued to Jankiel Rabinowicz.

Biography
Shandel Horowitz is the daughter of Jacob (Yankiel) Rabinowicz, the son of Rabbi Avigdor Rabinowicz and Tzipora Rabinowicz nee Shakhnovitz. Jacob was born on July 9, 1914 in Lohiszyn Poland and grew up in Suprasl, Poland, a shtetl near Bialystok, where his father was the chief rabbi. He studied at the Mir Yeshiva. After the start of World War II, the entire yeshiva fled to Vilna in then independent Lithuania. After the Soviet occupation of Lithuania the yeshiva began looking for a new home and the Japanese consul in Kovno, Chiune Sugihara granted transit visas for the entire yeshiva. Almost the entire yeshiva left for Japan during the months of January and February 1941. The yeshiva students traveled to Vladivostok on the Trans-Siberian railroad, and from there, sailed to Japan. They stayed in Kobe for six months before being deported to Shanghai in the fall of 1941. Soon after their arrival the students of the Mir Yeshiva were offered a temporary home in the Beth Aharon synagogue on Museum Road. After the war ended Jacob took a boat to San Francisco and made his way in Brooklyn. There, he frequented a grocery store whose owners provided free meals to refugees. The owner's daughter Fannie Wank helped serve the meals. Jacob and Fanny married in 1948.

Though Jacob survived the war, much of his immediate family perished in the Holocaust. His father, Rabbi Shlomo Avigdor Rabinowitz, the chief rabbi of Suprasl, was the first person killed. On Jyly 4, 1941, the Germans burned the torah scrolls of the synagogue and then executed Rabbi Rabinowicz. His wife Tzipora Rabinowicz was deported to Treblinka where she was murdered on November 29, 1942. Jacob's brother Dawid (b. 1917), sister Sara (Rabinowicz) Rozencwaig (b. 1911) and her husband Rabbi Dawid Rozencwaig also were killed in Treblinka. Another four brothers survived Aaron in Siberia, Shalom and Meir in the United States and Joseph in Israel.