Studio portrait of Edith (nee Weisz) and her baby son who perished in Auschwitz. 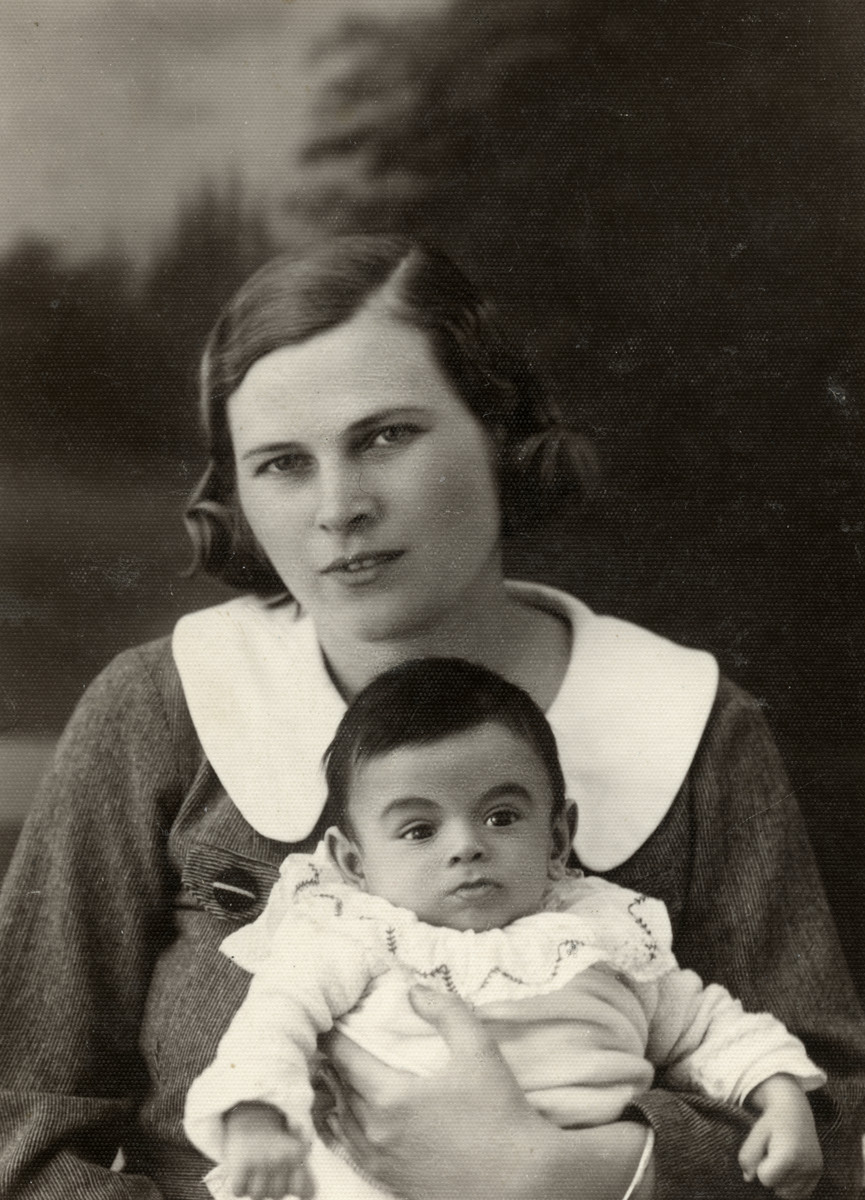 Studio portrait of Edith (nee Weisz) and her baby son who perished in Auschwitz.

Biography
Lili Weisz Klein Suryani (the aunt of the donor) was the daughter of Freida (b. Hungary) and Moshe Weisz (b. Romania). Lili was born on February 18, 1918 in Veszte, Hungary, a village several hours from Budapest, where her father owned a lumber business. Lili had four older siblings Edith, Lajos, Olga, and Dzusi. She had a special connection to Olga who immigrated to Palestine in the 1930's after Hitler's rise to power. The family was both religious and Zionist, and Lili knew how to read Hebrew. Her father even visited Palestine in the 1930s and bought a plot of land there. Agi attended high school a train ride away. Her German literature teacher was a young Jews named Imre Suryani. He was five years older than Lili. They fell in love with each other, and she graduated, Imre asked her father for her hand in marriage. Moshe objected since he wanted her to marry someone who would work in his business. Imre returned to Budapest and their connections were severed.
Lili married Miklos Klein who worked in her father's factory, and in 1939 she gave birth to a daughter Agnes (Agi). In 1942 Miklos, as well as Lili's two brothers were sent to Hungarian labor brigades. Lajos was killed on the Russian front where the officers had sent the Jewish conscripts to remove landmines. In 1942 Lili's father and second brother were arrested on suspicion of spying and were imprisoned for a few weeks. Lili's husband, Miklos was sent to forced labor where he later perished. After the German invasion of Hungary in 1944, Lili's father wanted his two daughters Lili and Edith to go to Budapest with their children, but they refused to leave their parents. On June 6th Moshe heard on BBC radio of the landing in Normandy. That same day, the thirty Jews in Veste were told to gather in the synagogue ad then sent to the ghetto of Grosswardein (Oradea, Romania.) where they remained a few days. From there they were deported to Auschwitz. Lili and Edith remained together but were immediately separated from their parents and children. When Lili arrived in Auschwitz she was in her early pregnancy with a second child. Her sister was a huge help. She risked her life and stole food for her. From Auschwitz she was sent to Ravensbrueck and Berlin. In prisoner uniform she was sent to work in a factory which manufactured parts for planes. There conditions were much better; even human, thanks to the local German workers. Towards the end of her pregnancy Lili returned to Ravensbrueck where other pregnant women were preparing to give birth. Lili and her newborn daughter named Gabriella were then sent to Bergen-Belsen. She nursed her for a few weeks before the baby died from malnutrition. Lili, having lost all hope, was finally liberated by the British on April 15, 1945. Lili went to Malmo to recuperate, and she stayed in a sanatorium for a few months. Afterwards she worked for a Swedish family in Stockholm taking care of their two children. Lili had hoped to go to Palestine to join her sister Olga but was unable to obtain the necessary certificate. She returned to her hometown of Sharkat and realized that besides her sister Edith, no other members of her family had survived.
Already while in Sweden, Lili started receiving letters from Imre, her former high school teacher. He had never married and has survived his ordeal in forced labor. He and Lili married him and settled in Budapest. Lili could not have more children after her experiences in the camps. After the Hungarian revolution in 1956 Lili wanted to immigrate to Israel but Imre was unwilling. However, she was able to travel there on visits. In 1965 moved to Germany. Imre passed away in Germany in 1989 and Lili died in Budapest in 2012.