Survivors of medical experiments done in the Ravensbrueck concentration camp are received by the Human Rights Division of the United Nations. 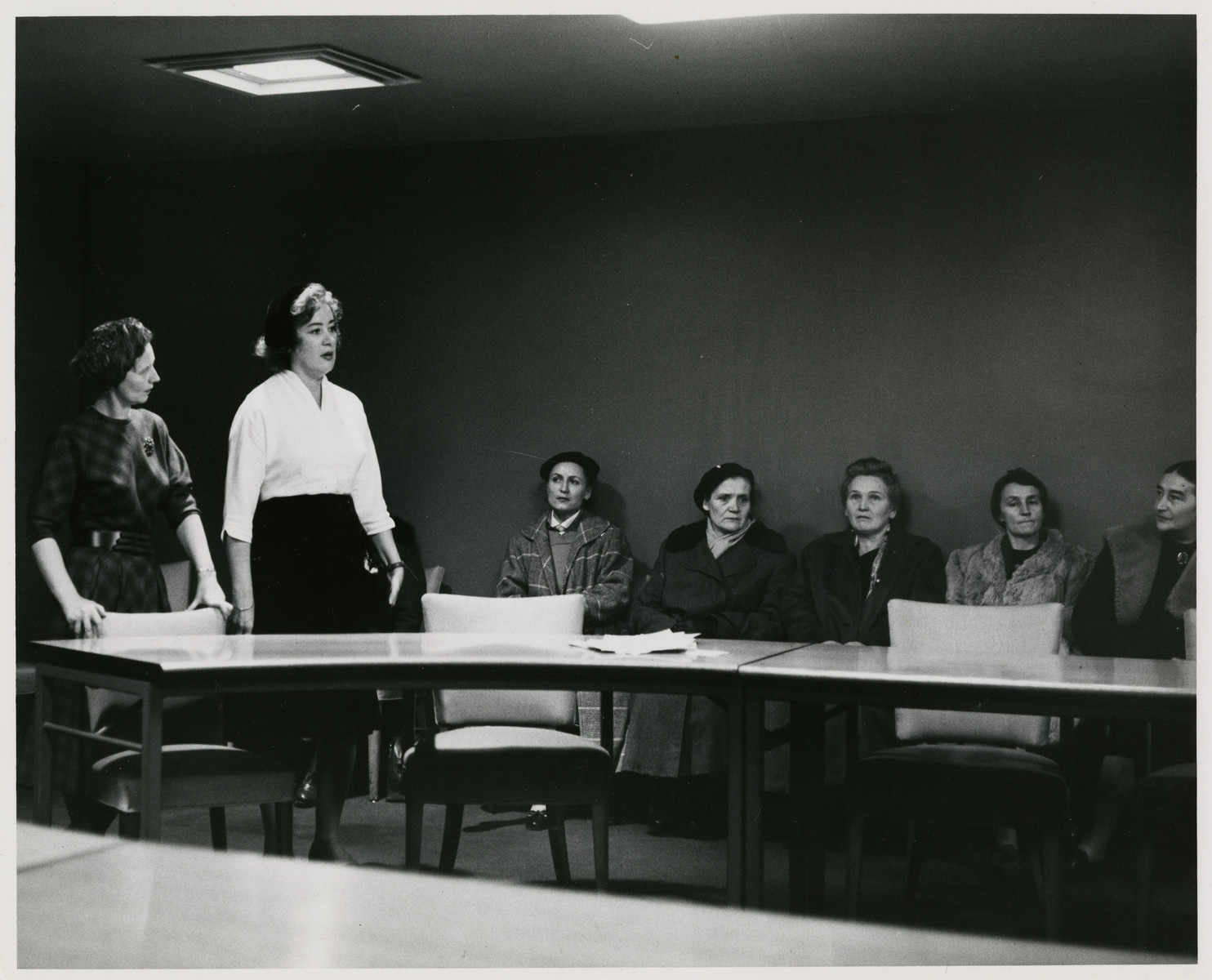 Survivors of medical experiments done in the Ravensbrueck concentration camp are received by the Human Rights Division of the United Nations.

Bogumila Babinska is standing in the white blouse. Standing by her side is Helena Piasecka (sister of Wladyslawa Karolewska). Seated left to right are unidentified, Stanislawa Michalik, Maria Cabaj, Wladyslawa Marczewska, and Joanna Szydlowska.

Biography
Bogumila Jasuik (born Bogumila Babinska) was born in 1915 to a Polish Catholic family. She grew up in Krzemieniec where her father worked as a teacher. After completing high school she went to study in Warsaw and graduated from the University of Commerce with a Master's degree in business. After the start of World War II, Bogumila began working for the Polish underground. In 1941 she was caught, arrested and sent to the Lublin prison where she was beaten and tortured. Then in September 1941 she was sent to the women's concentration camp of Ravensbrueck in a so-called special transport. She performed forced labor, twelve hours a day. Among her tasks, she manufactured straw shoes for the Germany army. She also was chosen as one of the 74 "Rabbits" or guinea pigs for sadistic medical experimentation. German doctors experimented on her twice in November and December 1942, making four cuts on the muscles of her thigh. Then, in the beginning of 1943, they cut open her shin bone. She suffered severe pain and high fever and was very sick for months to come. However, despite the pain, she still had to return to work following the operations and labored for 12 hours a day knitting socks for German soldiers. In 1943 she and her few close friends started to send illegal, invisible messages written in urine between the lines to their families in Warsaw and Lublin. Bogumila's uncle was a member of the Polish Home Army (Armia Krajowa). Using couriers, he informed the Polish Government-in-exile in London and the Red Cross about these experiments. In August of 1943 Bogumila and the other "Rabbits" protested against the operations for which they were severely punished. The German camp personnel planned to execute them on February 4, 1945. Bogumila succeeded in hiding and survived thanks to the help of prisoners of various nationalities. When the Red Cross evacuated some Ravensbrueck prisoners to Sweden in early April of 1945, camp authorities would not allow the Rabbits to leave as they still tried to deny their existence. Instead, on April 28, 1945 they sent the Rabbits along with the other remaining prisoners on a death march. Though crippled, the women walked home without either water or food. After returning to Warsaw, Bogumila continued her professional career and married. She passed away in 1980 in Warsaw.

Caroline Woolsey Ferriday was the only child of Henry Ferriday, a New York dry goods merchant, and Eliza Woolsey Ferriday. Caroline was born in 1902. After a brief stint on Broadway, she began working as a volunteer at the French consulate in New York. After the start of World War II, she raised money to assist French children, particularly war orphans. After the war, female French survivors of the Ravensbrueck concentration camp told her of the plight of Polish female political prisoners who were the victims of medical experimentation. Known as "lapins" (rabbits), these women endured horrendous suffering after Nazi doctors sliced their legs open and inserted foreign substances to imitate the effects of shrapnel wounds. After the war, Germany refused to grant these women compensation for their injuries on the grounds that they didn't have diplomatic relations with Poland. Caroline Ferriday sought ways to come to their relief. She appealed to Norman Cousins, the editor of the Saturday Review, and he in turn visited the women and launched a press campaign on their behalf. Cousins published his article in June 1958 and the following year thirty-five of the surviving women came to the United States for medical treatment.