Three survivors pose for a studio portrait in their camp uniforms after liberation. 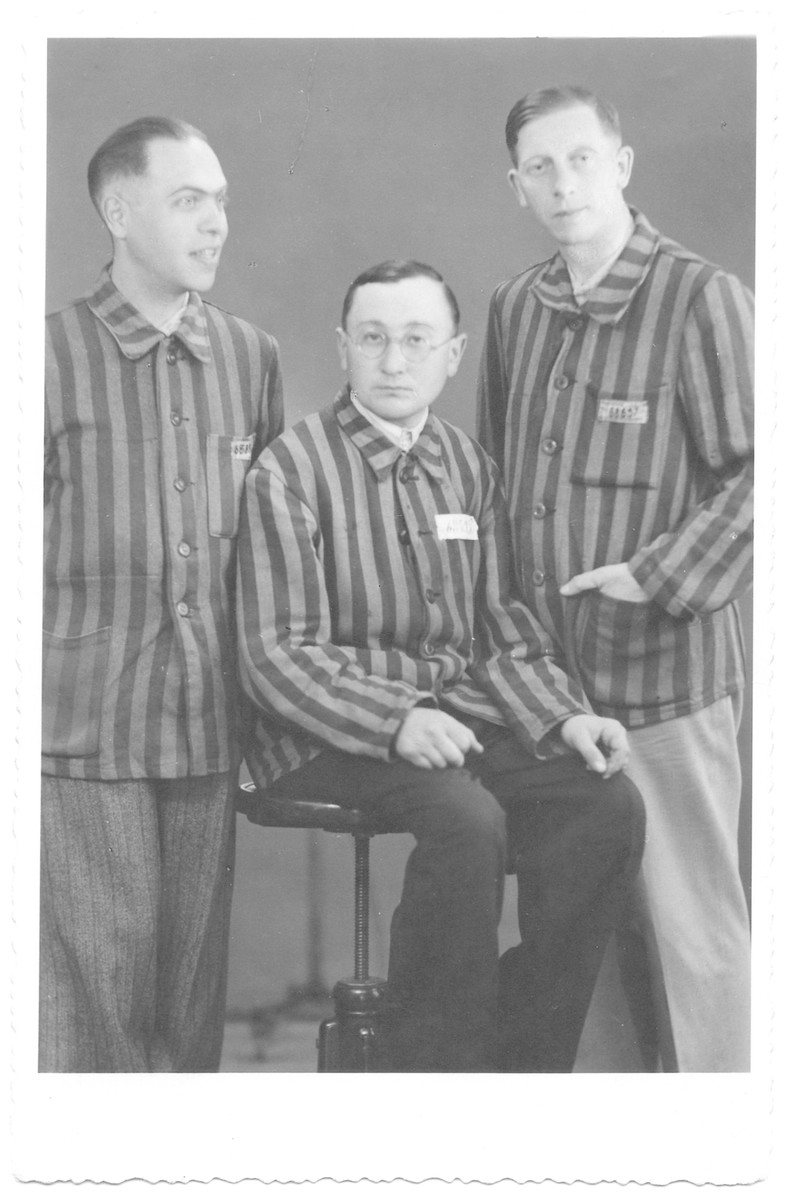 Three survivors pose for a studio portrait in their camp uniforms after liberation.

Biography
Helen Finkelstein (born Helen Ungar) is the daughter of Alfred and Stefania Ungar. Helen was born in Cracow, Poland in 1933 and had one older brother named Adam born in 1930. Alfred was an accountant at a bank and Stefania looked after the children. When the Germans invaded Poland, Helen was six years old. They were all required to wear the Jewish star patch as an identifier. Eventually the Germans picked up Helen and her family in a big truck with other Jews and they were transported to a labor camp in Prokocim, Poland. In the camp, one of the cooks looked after some of the children including Helen and hid them during round-ups. He also snuck them extra food and gave them jobs; Helen was always in charge of peeling potatoes. Alfred worked in a camp office, and Stefania worked in the kitchen which allowed her to get more food for the family. Sometimes, Alfred and Stefania arranged for Helen to leave the camp for a day to spend some time at the home of a woman named Talia who lived near the camp. Helen helped Talia around her house and helped her serve dinner to her many guests. Once, Talia hosted Oscar Schindler and his friends, and Helen served them dinner.
Eventually, Alfred and Stefania decided to escape the camp, so the family went into an attic in one of the offices with a group of ten other Jews. The Germans found the group and dragged them outside. They shot a few people right away. Then they lined up some of the children against a wall. Helen was first and her brother was second in the line. One of the Germans had a gun against Helen's back and was about to shoot her when Schindler showed up and told the Germans to leave the children alone. He remembered Helen from the dinner and saved her life that day. After being in the camp for about a year, the cook that looked after the children paid off the guards to let a few kids escape during the night. Each child was assigned to a different home. After a while, Adam's rescuers decided they did not want him anymore and sent him back to the camp where he was shot on Oct 15, 1943, just days before his thirteenth birthday. Helen went to Talia's house. She was only supposed to be there for a few days until her mother would get her, but Stefania was killed in the camp before she could escape. Talia then brought Helen to the home of the Romaniec family; she told them Helen was a Christian orphan whose parents had died in an accident. One day, one of the Romaniec's confronted Helen and said that they knew she was really Jewish and wanted to see her papers. Helen realized she was not safe there anymore and ran back to Talia's house. Helen stayed there until the end of the war.
After Russia liberated Poland in 1945 Helen then found her uncle, Ilek Willnski, and went to live with him in Cracow. After a little while, Alfred found them and the two were reunited. Helen, Alfred, and Ilek moved to a town called Boyton where they opened up a deli. Helen was then 11 years old and had never attended school. Her father got her a tutor and then sent her off to the first grade. One of Helen's aunts who had also survived was living in Frystat, Czechoslovakia. She invited Helen and Alfred to live with her. One day, Alfred took a trip to Prague. He called Helen and told her that he was going to Germany and once he was established, he would send for her. Alfred left for Germany, and then eventually moved to New York. Helen stayed in Czechoslovakia for a total of eight years. The first six years she spent with her aunt in Frystat, and the last two years she lived in Prague and attended dental school. While she was in school, her father sent her a visa to come to America. She decided to drop out of school to live with him. In order to fly to America, she first had to take a train to Munich. She was only supposed to stay in Munich for a week, but she ended up staying for about a year and a half. In 1954 she took a plane to New York where she stayed for only a few days. Alfred had since remarried and relocated to Los Angeles, California. Helen moved in with them, and Alfred helped her to find work. Her English was very limited at this time. She first took care of a small child for a family. Then she worked in a shoe factory. Later that same year Helen met her husband and the two got married. They had one son and one daughter together.