Children and teachers in the Tiefenbrunner children's home stand in a courtyard. 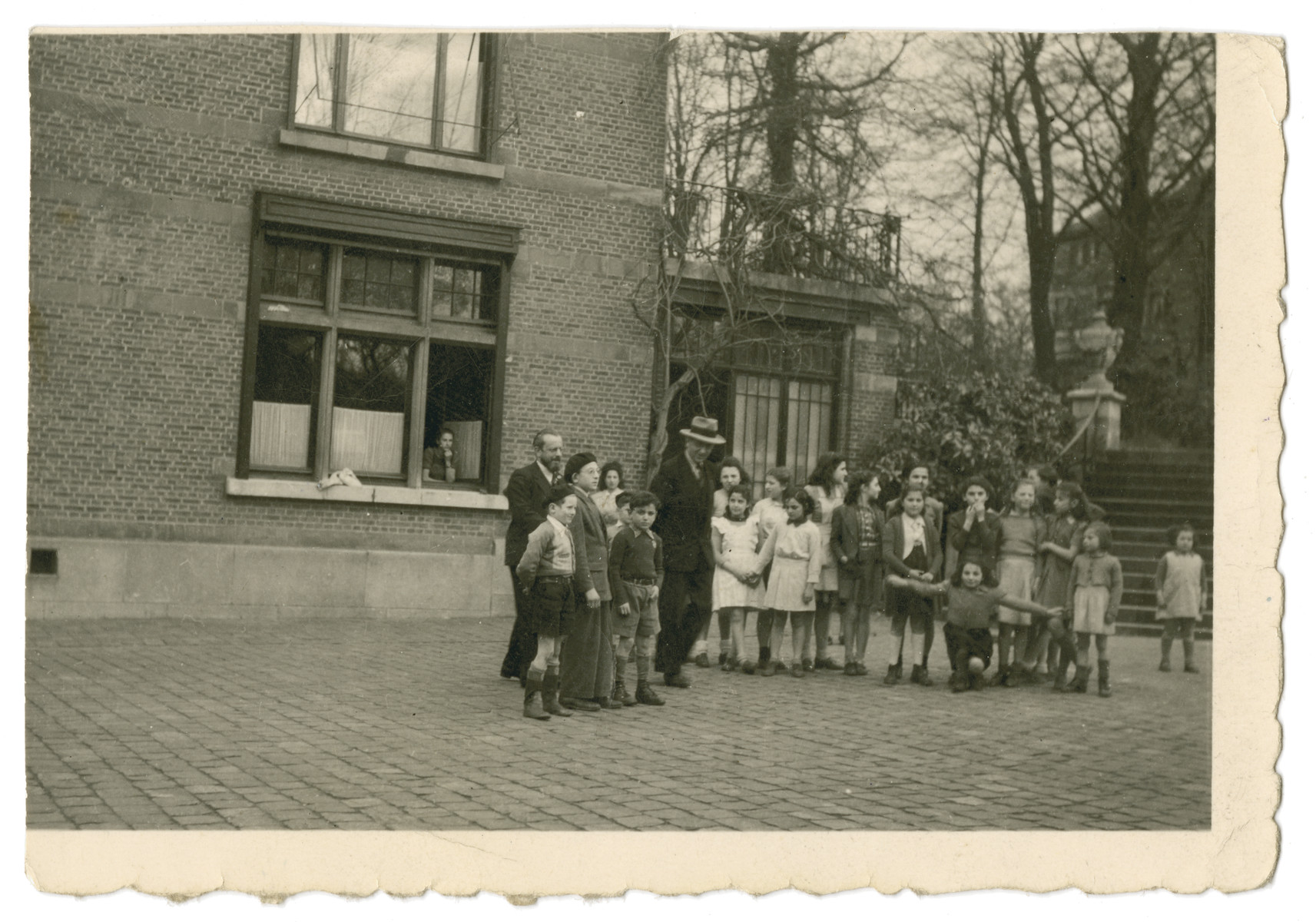 Children and teachers in the Tiefenbrunner children's home stand in a courtyard.

Among those pictured is Ava Schonberg. Her sister Celine is standing next to the taller man Mr. Bamberger, the director of the school.

Biography
Ava Schonberg (born Eva Schonberg) is the daughter of David Schonberg (b. Tenczynick, Poland on 3/17/1905) and Rosa Elowicz Schonberg (b. Dukla, Poland on 2/15/1909. David and Roza Schonberg moved to Antwerp prior to the birth of their three children: Celine (b. 11/3/1935, Ava (b. 1/18/1937) and Alice (b. 10/22/1941). The family was very religious, and David worked as a diamond cutter. In September, 1942 Ava's father David Schonberg was arrested taken to Malines, and then on September 12 he was transported to Auschwitz on Convoy IX. Soon after he was arrested, Roza went into hiding with her children. Roza hid together with the baby Alice, and Celine and Ava hid separately. Ava first hid with a Jewish family who was temporarily exempt from deportation. They moved from place to place and always lived in fear. Then Roza found a secure spot in the attic of her seamstress Madame Louise in Brussels. She lived there for almost a year. Madame Louise brought Celine and Ava to the convent Notre Dame de Sept Douleurs in Wezembeek. Roza accompanied Madame Louise on a few visits to the convent, but for security Madame Louise pretended to be the girls' mother. Only the mother superior knew they were Jewish. The convent hid some 18 Jewish children at different points. The nuns of the convent were later recognized by Yad Vashem as Righteous among the Nations.

In 1944, Roza arranged for a member of the Belgian underground to smuggle the family into Switzerland. They boarded a truck filled with approximately 50 other Jews and traveled to the boarder by way of France. However, en route Celine contracted the measles and couldn't proceed. Roza sent Ava on ahead with Alice while she remained with Celine. The whole time, Ava held the hand of her toddler sister lest anything happen to her. After the sisters snuck under the barbed wire border fence, they were brought to the Girenbad refugee camp near Zurich. They later learned that the adults who came with them were returned to France and later deported to Auschwitz. Two weeks later Ava's mother and Celine arrived safely in Switzerland. Roza and Alice went to the Morgins refugee camp, and Ava and Celine were brought to foster families in Zurich. Ava lived with Arnold Scheiner and his wife, a very kindly older couple who had no children of their own. Celine lived with another family.
After the war ended in 1945 Roza retrieved her daughters and returned to Belgium. It soon became clear that David had not survived. Roza needed time to put her life back in order and put the girls in a religious orphanage run by Mr. Tiefenbrunner. Ava and Celine lived there for three year; their mother, who found work as the first female diamond cutter, sent them packages once a week. Another American family who wanted to help war orphans also sent monthly packages of food and clothing. In 1948 the girls moved back to live with their mother and attended the Orthodox Beit Yaakov School. About a year later, Roza remarried Rabbi Haskel Dovid Halberstam who had lost all of his children and his pregnant wife during the Holocaust. He legally adopted the three Schonberg girls. In 1953 they immigrated to the United States and settled in New York.