A temporary identification card issued to a Polish Jewish girl, Pola Fogelman, under a false name: Pelagia Pisula. The verso of the card has the prisoner number 7458. 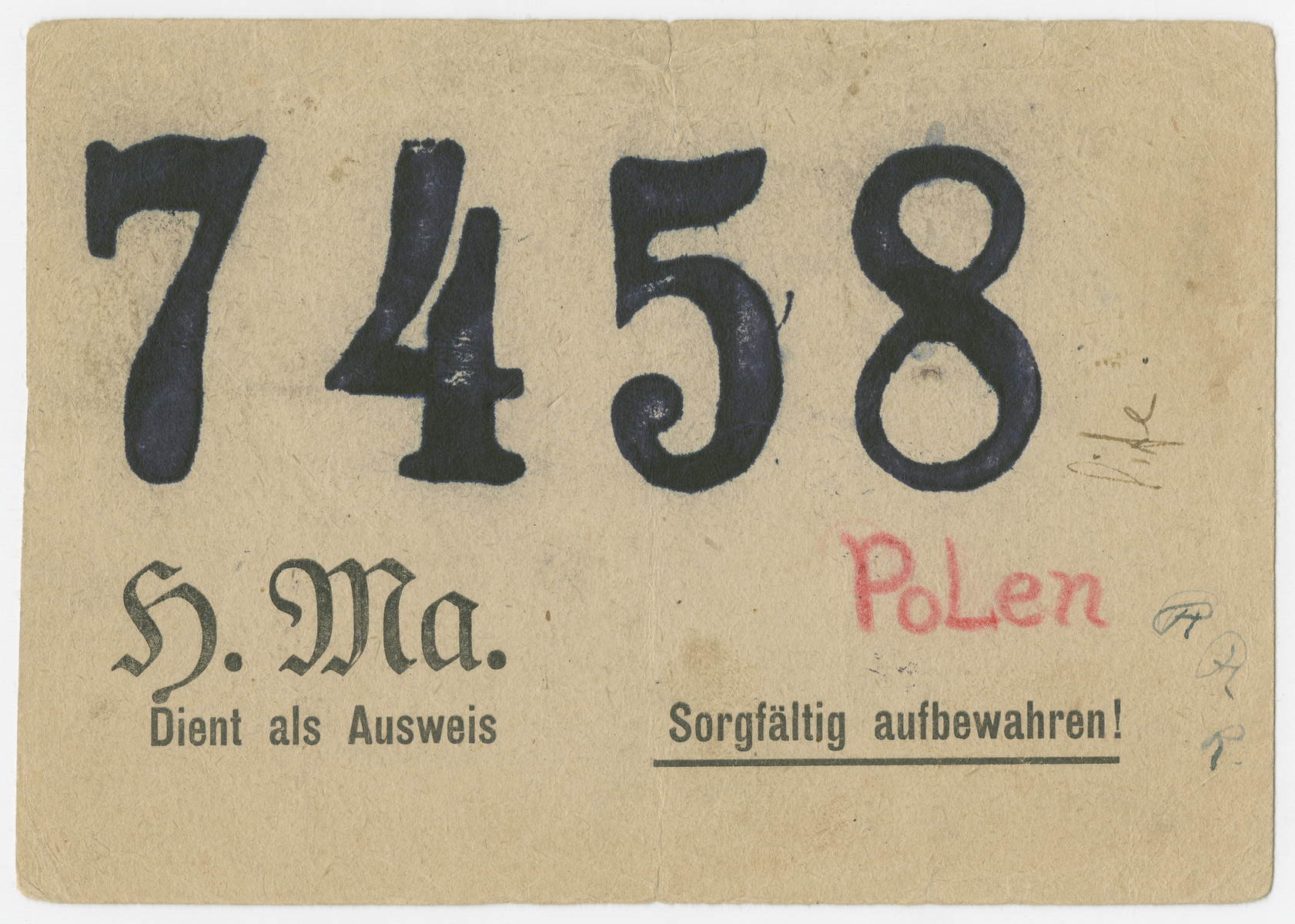 A temporary identification card issued to a Polish Jewish girl, Pola Fogelman, under a false name: Pelagia Pisula. The verso of the card has the prisoner number 7458.

The false last name is the name of her rescuer, Natalia Pisula. The pass was used for Pola to get in and out of the Primerwald labor camp/munitions factory.

Biography
Pola Spitzer (born Pola Fogelman) is the daughter of Hersh Fogelman and Sara Borzykowski. Pola was born November 4, 1929 in Radomsko, Poland where her father worked as a master tailor and owned a large workshop. Her sister, Genia (later Jean Bardach), was born September 27, 1927, and her brother, Abraham Joseph, was born in 1932. Pola's maternal grandfather was Shlomo Borzykowski, and her paternal grandparents were Emanuel and Yetta Fogelman. When Germans invaded Poland in September of 1939, the Fogelman's fled Radomsko on foot. As they fled, German planes flew overhead, gunning down the masses of refugees. The Fogelmans survived but were rounded up and sent to the Radomsko ghetto, where they lived in deplorable conditions in a one-room apartment with ten occupants. Pola continued school in the ghetto, taught by Mrs. Panska, a teacher that held lessons in her home surreptitiously. In 1942, rumors of the concentration camps began circulating in the ghetto. German soldiers began to round up Jews and bring them to a site for deportation. The Germans rounded up Sara and the three children to take them to the deportation site. However, after Hersh bribed one of the Germans they were released. They then returned to the ghetto and hid in an attic. However during a subsequent round-up in October 1942, Pola's mother, Sara, was captured and deported to Treblinka.

A Polish-Catholic woman named Natalia Pisula came into the ghetto and smuggled out a fifteen-year-old girl named Halina, a close friend of Genia's. Halina convinced Natalia to return two more times, to rescue first Genia and then Pola. The girls lived with Natalia in her small apartment in Czestochowa until living in the city became too dangerous. In the winter of 1943, Natalia's father brought Pola to their farmhouse in Borowe, a small village annexed tino Germany. Partisans lived in the dense woods surrounding Borowe, which attracted Germans seeking to capture the partisan groups and anyone that might harbor them. One day, soldiers arrived at the farmhouse to question and interrogate the family, demanding their documents and identification. Before the soldiers could question Pola who had no documents, a sound was heard outside that the Germans went to investigate and never returned. Afterwards, a plan was devised to send Halina, Genia, and Pola to Germany to work as volunteer laborers. Natalia obtained false papers for the girls. Genia left first and found work at an inn, and then her employers sent for Pola to work there as well. One of the sons of the inn keeper belonged to the SS, and the inn keeper's father enjoyed showing off antisemitic propaganda he had collected. Pola later left the inn and worked as a maid for a couple with five children. The family never suspected that Pola was Jewish. In the fall of 1944, as Germany was losing the war foreign workers were conscripted for the war effort. Pola and Genia were sent as Polish Catholics to a munitions factory attached to the Primerwald labor camp. The sisters lived in barracks with other Polish and Russian girls, living and working together in harsh conditions until their liberation by the Soviet Army on May 2, 1945. They returned to Czestochowa in July of that year to look for Natalia. They were unsuccessful, but then found a Jewish organization that reunited them with family friends in Radomsko. Pola and Genia returned to their hometown and learned of their family's fate; Hersh died of typhoid in the Skarzysko-Kamienna concentration camp. Sara was killed in Treblinka. Abraham Joseph, their brother, was shot in the Radomsko ghetto while running back towards his father after being separated from him by German soldiers during a deportation round-up.

Pola and Genia left Poland and went to the Landsberg displaced persons camp in southern Germany, where they contacted their father's sister in America. She sponsored Pola and Genia's immigration to the United States in 1946. Pola was 17 and Genia was 19 when they arrived in New York. Both learned English and worked multiple jobs. Pola ultimately attended business school and worked as a bookkeeper. She met Alexander Spitzer, a survivor from Transcarpathia who had survived in Russia. They married on February 11, 1951, and moved to Los Angeles, California. They have two daughters, Linda Abraham and Sandy Kanter.

Pola and Jean later discovered where Natalia was living in Poland, and regularly sent her money. They brought Natalia's daughter, Jeannine, to the United States, and she lived with both Pola and Jean for some time. In 1979 Natalia Pisula was recognized by Yad Vashem as Righteous Among the Nations.