A physician examines Maria Kusmierczuk, a survivor of medical experiments performed when she was a prisoner in the Ravensbrueck concentration camp. 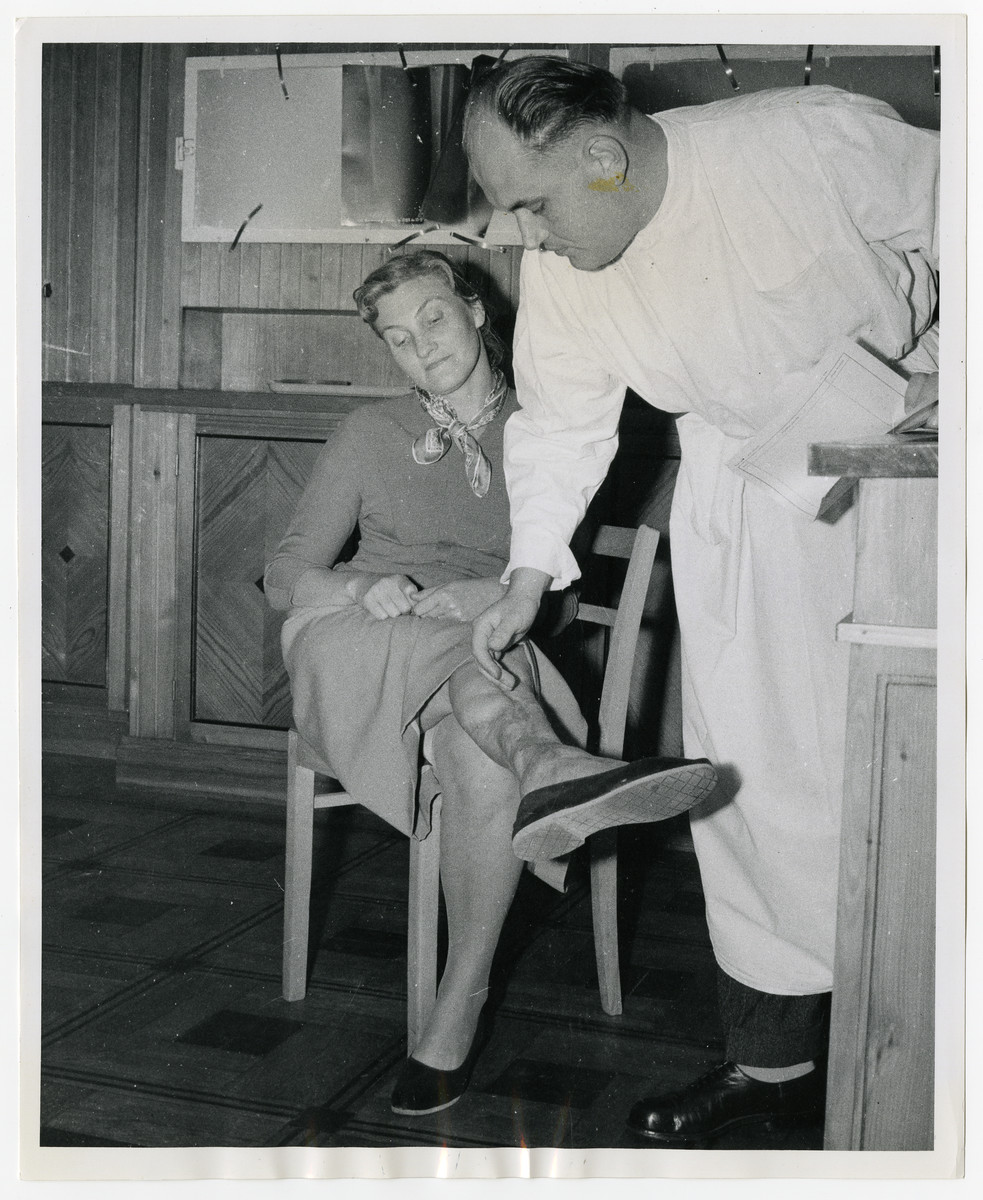 A physician examines Maria Kusmierczuk, a survivor of medical experiments performed when she was a prisoner in the Ravensbrueck concentration camp.

Biography
Maria Kusmierczuk is the daughter of Leon and Natalia Kusmierczuk. She was born in Zamosc in 1920 to a Polish Catholic family. When World War II broke out in September 1939, she was supposed to start her second year studying mathematics and science at the Stefan Batory University in Vilna. Instead she joined ZWZ the underground resistance movement associated with Home Army and for the next year distributed illegal publications. She moved from her parents' house to another location after the arrest of the young man she worked with. On November 9, 1940 the Gestapo found her and arrested her. That day Gestapo told her parents that Maria's older brother had died in Auschwitz. They also arrested her father and sister. Maria was taken to the prison in Zamosc for interrogation and ten days later to Lublin Castle prison (Nov 20, 1940). In January 1941 the Gestapo moved her to another building in Lublin called "Under the clock" known for its torture chambers. For three months, Maria lived in a windowless dungeon. Though she was repeatedly interrogated and beaten, she never revealed the names of other resistance members. On September 23, 1941 transported Maria along with other women held in various Lublin prisons to the Ravensbrueck concentration camp. There she was forced to work in very harsh conditions at a construction site lifting and carrying heavy objects, bricks and sand. Later she worked in workshops sewing together pieces of rabbit fur for Germans on the Russian front and making straw inserts for soldiers' shoes. The following year, Maria became the subject of brutal medical sulfanilamide experiments. On October 7th, 1942 she and other young Polish women were given morphine and put to sleep. Maria woke up in a terrible pain and her leg in a cast. She had a very high fever and severe infection resulting from her leg having been infected with tetanus bacteria. The cast was supposed to keep oxygen away from the wound. Maria remained in the hospital until April 1943. However, the wound did not heal, the bone of her leg remained exposed and she unable to walk. Experiencing horrible pain from the deep-seated infection, she was readmitted to the hospital. The wound never healed. At the end of the war Maria hid by using the number of a deceased prisoner. The camp was evacuated 28 April 1945, and Maria walked home to Poland with a group of other women. Though she herself was crippled, she helped push other disabled women in a carriage. In 1946 Maria began her studies at The Medical School in Gdansk. After receiving her MD in 1952, she worked with cancer patients for the Department of Radiology in Gdansk Medical School.

Caroline Woolsey Ferriday was the only child of Henry Ferriday, a New York dry goods merchant, and Eliza Woolsey Ferriday. Caroline was born in 1902. After a brief stint on Broadway, she began working as a volunteer at the French consulate in New York. After the start of World War II, she raised money to assist French children, particularly war orphans. After the war, female French survivors of the Ravensbrueck concentration camp told her of the plight of Polish female political prisoners who were the victims of medical experimentation. Known as "lapins" (rabbits), these women endured horrendous suffering after Nazi doctors sliced their legs open and inserted foreign substances to imitate the effects of shrapnel wounds. After the war, Germany refused to grant these women compensation for their injuries on the grounds that they didn't have diplomatic relations with Poland. Caroline Ferriday sought ways to come to their relief. She appealed to Norman Cousins, the editor of the Saturday Review, and he in turn visited the women and launched a press campaign on their behalf. Cousins published his article in June 1958 and the following year thirty-five of the surviving women came to the United States for medical treatment.