Gizelle Herskovits poses for a picture in the streets of her home town. 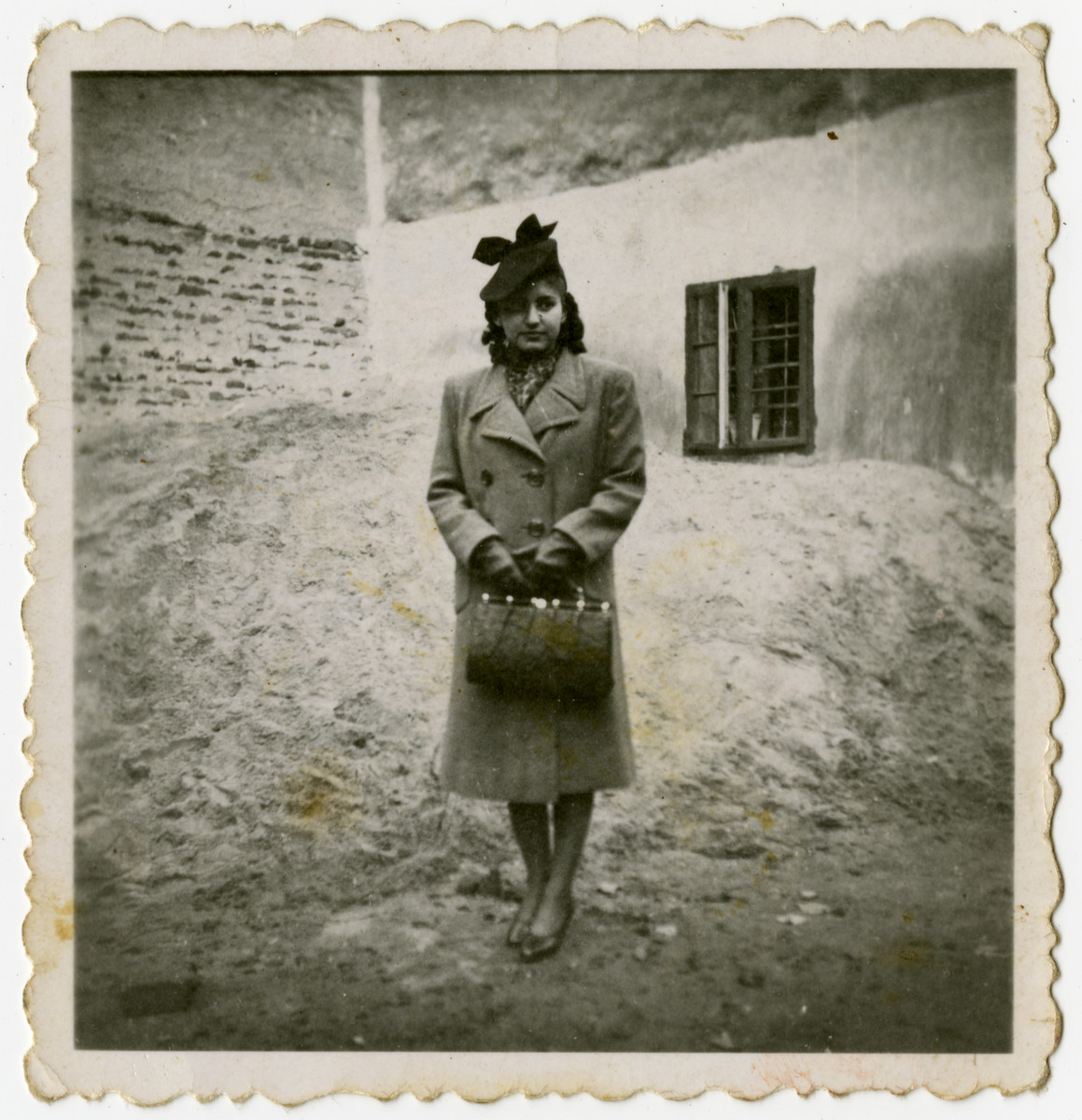 Gizelle Herskovits poses for a picture in the streets of her home town.

Biography
Gloria Hartenbaum (born Gizelle Herskovits, later Gizelle Hersh) was the oldest daughter of Emanuel and Mariska Herskovits. She was born on May 22, 1922 in Satu Mare, Romania and grew up in Bixad, a small nearby community that served as a summer spa resort. Gizelle had four younger siblings: a brother Alexander and three sisters Vicky (later Zepnick), Magda (later Kramer), and Katya (later Rezak). The family was upper middle class family. Emanuel Herskovits owned a bus company and restaurant, and the family lived in a large house with two maids. Emanuel was also a devoted follower of the Munkaczer Rebbe, and he would frequently host Friday night worship ceremonies in their house. The children attended a local Roman Catholic school in Bixad that had sections for both Catholics and other nationalities/religious groups. Around 1937, the family began to experience the effects of antisemitism. Emanuel's bus corporation was taken away and given to a Romanian man named Mera; a few years later their family's restaurant was closed down. In 1940, Satu Mare became part of Hungary, and in March 1944 Germany invaded the region. Despite these hard times, the Herskovits family decided to stay together in their home. In 1944, the heads of households in the town were required to report to city hall and register their families. One week later, the Herskovits family along with many others were gathered and transported to the Satu Mare ghetto. For ten days, they shared a single room in a house with the Waldman family. At the end of April 1944, the Jews of the ghetto were loaded into cattle cars with 100 people per car. Gizelle spent three nights and two days on the train before arriving in Auschwitz II-Birkenau. Upon arrival, the SS officer at the ramp tasked Gizelle with translating Hungarian to German for him. She stood with him at the head of the line as he sorted the arriving transport. The elderly, the ill, and mothers with young children were sent one way while young, able-bodied people were sent the other way. Gizelle's parents were sent towards the gas chambers while her siblings were sent to the barracks. When her family was separated, her mother yelled to her: "Gizelle, save the children!" The first chance she got, Gizelle headed towards the barracks to find her siblings. Gizelle soon learned that her brother had been taken to the men's barracks, so she was now solely responsible for her three younger sisters. The girls were then sent to the showers where their heads were shaved and they were forced to strip and put on striped uniforms.

Gizelle and her sisters stayed at Auschwitz II-Birkenau until the end of August 1944. At that time, they were chosen as part of a group of 1,000 girls who were sent to Geislingen an der Steige to work in the factories with 20,000 POW men. The girls worked in shifts and were taught to use the press machines to help produce pistols. Eventually, Gizelle got a job in the kitchen where she was able to get some extra food for her family. When nearby Stuttgart was bombed, the Herskovits girls were at the factory/camp which somehow remained untouched. Soon after, the factory was closed, and at the end of March 1945 the girls were sent on a train to Dachau.

There, Gizelle and her sisters found their Uncle Adolf's sons, Alan and Andrew Herskovits, who had just arrived from a death march. However, the girls did not remain for long. The 1,000 girls were told that they would be going away to a mountain resort, and were loaded up into cattle cars again. The train moved back and forth on the tracks for eight days before finally ending up exactly where it started and liberated by American forces. The Army cared for the girls for about four weeks. Gizelle and her sisters eventually went to the Feldafing displaced persons camp near Munich. They learned that their parents had been killed in the gas chambers at Auschwitz II-Birkenau and that their brother, Alexander, was killed one week before liberation at Mauthausen, Gizelle knew she and her sisters could not go back home. She contacted cousins who lived in the United States who agreed that the sisters could come stay with them. The Herskovits sisters were sponsored by the UJA (United Jewish Appeal), and arrived in America on December 22, 1945. One year after arriving in the States, Gizelle now Gloria became engaged to Bela Hartenbaum, a U.S. Veteran who had served in Japan during the war. The couple married and had two children and seven grandchildren.

Gloria has also written a book, under the name Gizelle Hersh, about her experience during the Holocaust called, "Gizelle, Save the Children!"