The Alt family gathers for coffee at Aunt Liesel's home. 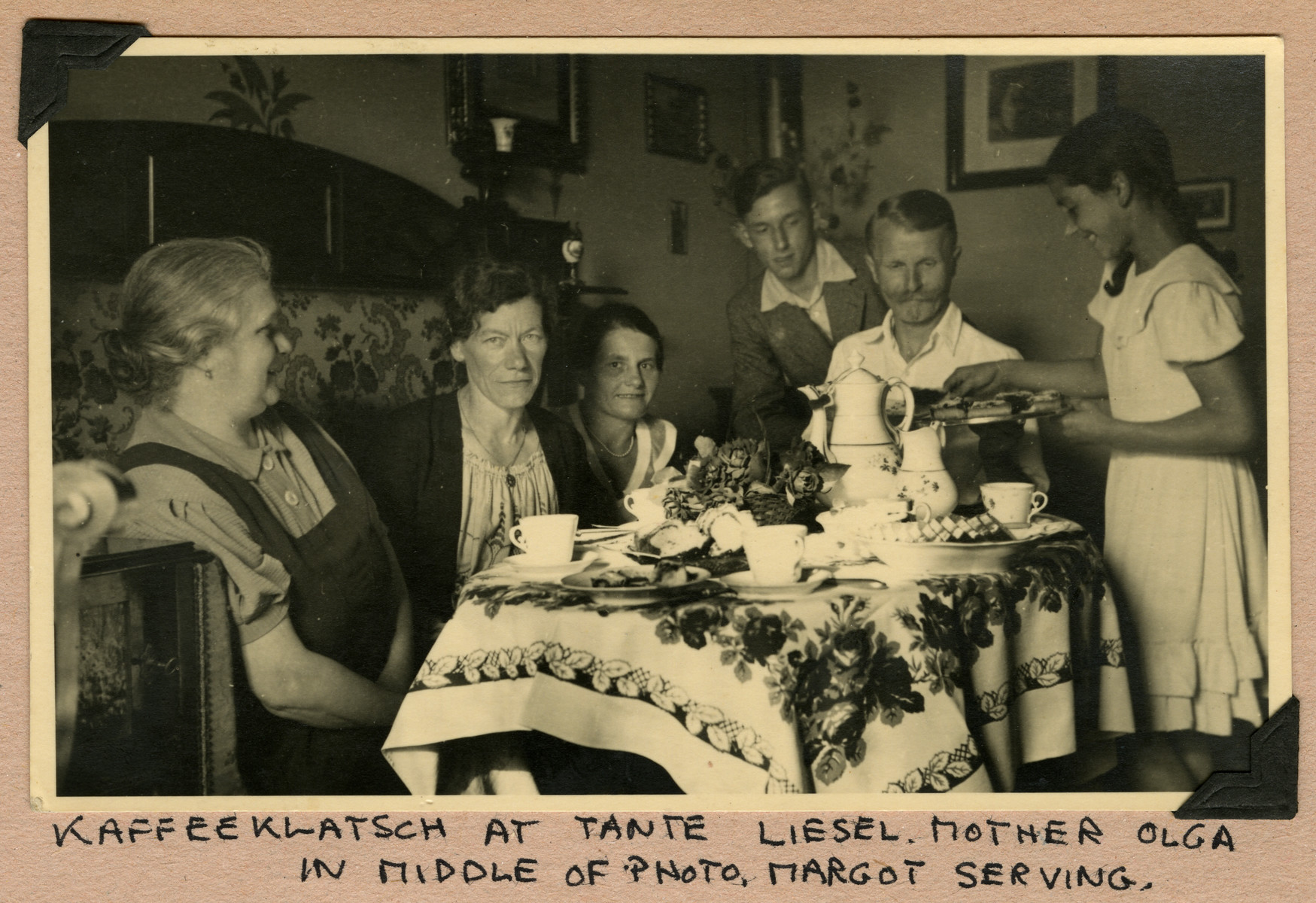 The Alt family gathers for coffee at Aunt Liesel's home.

Olga Alt (mother of Margot) is pictured in the center, and Margot is serving the cakes.

Biography
Kurt Joseph Feigenbaum (later Baum, the father of the donor) was the son of Emil and Clara nee Reis. His parents married in 1920, and Kurt born the following year on September 15, 1921. Kurt grew up in Zuffenhausen, an affluent suburb of Stuttgart where his father worked in the textile business. His younger brother Werner was born in 1929. After the imposition of the Nuremberg laws, Kurt's father felt that Nazism would not simply blow over and he decided the family should emigrate. Since he planned to return to Germany after the fall of the regime, they moved to nearby Belgium. Despite the fact that they had come to Belgium legally, after the German invasion of May 10, 1940, the Belgian government arrested Kurt and his father and sent them to internment camps in the South of France. En route to France, German airplanes bombed the train killing Emil. Kurt had to continue on without him. Kurt's mother tried to flee together his grandmother and younger brother but was not successful. They retraced their steps only to find their home occupied by Germans. They later went into hiding and were arrested towards the end of the war. On May 13, 1940 Kurt arrived in Saint Cyprien, and he remained there until late August. The sanitary conditions in this camp were abominable, and Kurt contracted typhus. He then spent six weeks in a hospital in Perpignan. After he recovered he was sent to Camp Argeles-sur-Mer on the Mediterranean coast. At that point an uncle who lived in freedom in France arranged for Kurt's release to work in forced labor battalions. Though he was not paid for his work, Kurt received better food and more liberty. However in September 1942 Kurt was rearrested and taken to Drancy, a transit camp in Paris. On September 6, 1942, he was packed into a sealed train without enough to drink and any sanitary facilities. After five days, the train stopped, and Kurt was taken with a group of about 300 young men to Kochanowitz, a small camp on the German-Polish border. He remained a prisoner there for ten months enduring whippings, beatings and starvation. He was forced to perform various types of hard labor to include digging trenches, repairing train tracks, and moving concrete sacks from one part of the camp to another. From Kochanowitz, his group was sent to the slave labor camp of Borsigwerk, a big electrical company in Germany, to lay railroad beds. Kurt works for the camp director and remained there until the beginning of March, 1944. From there he was sent via cattle cars to Blechhammer, a sub-camp of Auschwitz to help construct what was supposed to become the largest synthetic oil refinery in the German empire. There, Kurt was tattooed, performed heavy labor and was beaten by guards methodically being worked to death. The Germans evacuated the camp in January 1945 and sent the prisoners on a death march. Kurt marched in the snow for two weeks until he arrived at Gross-Rosen. He then was put on a train to Weimar. From there they marched to the Buchenwald concentration camp arriving on February 9, 1945. On April 5th, inmates were told to assemble for another transport. Kurt knew he would not survive and remained hiding in a large garbage dumpster until April 11th when he was liberated. After the war, he returned to Stuttgart in search of his mother and brother, Werner. He got a job with the US Government. There he met a young German woman, Margot Alt. She had attended Heidelberg teaching college. Her father had previously died, and her mother and little sister were killed in American bombing raid. Margot and Kurt began dating, but he returned to Belgium in 1947 after learning that his mother and brother had survived the war. The following year Kurt returned to Germany and proposed on condition that Margot convert to Judaism. They married later that year, and in August 1950 they immigrated to the United States.