Girls in the fourth grade class in Dordrecht sit at their desks. 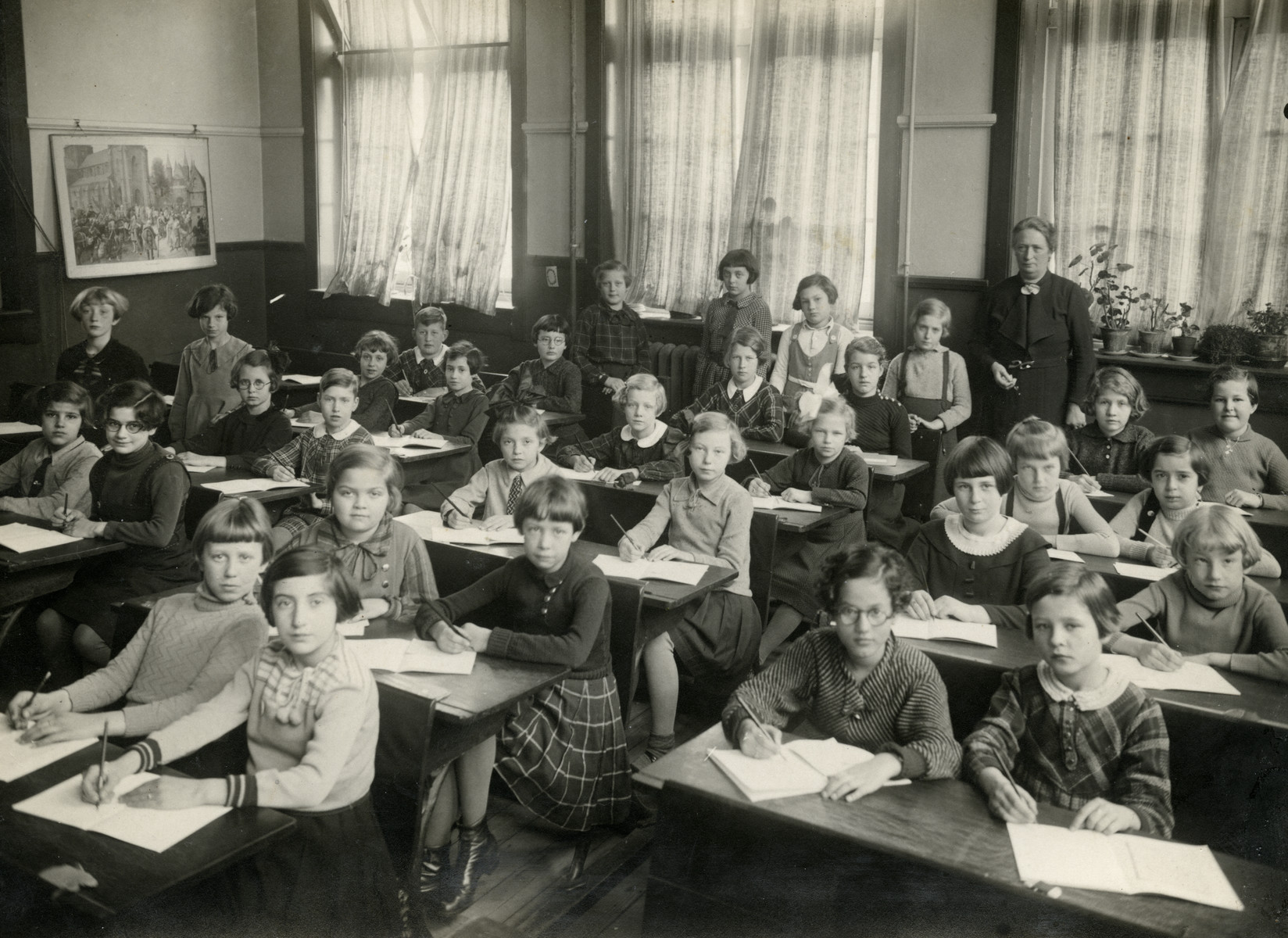 Girls in the fourth grade class in Dordrecht sit at their desks.

Margalit Lujten is sitting in the second row on the far right. Also pictured is another Jewish girl, Mia Achteribbe, in the front row, second from the right.

Biography
Margalit Lujten is the daughter of a Christian father, Adrian Lujten (b. June 12, 1889) and a Jewish mother, Hendrika (Hanna) Rosendaal (b. September 10, 1889). Margalit was born on October 31, 1926 in Dordrecht Holland and her one brother Adrian (Ad) was born on October 10, 1928. Margalit's family was totally assimilated; the family celebrated Christmas and New Year's, but she did become exposed to Jewish customs at the home of her maternal grandmother. Her father had a business cutting glass and fixing and painting houses. He also owned a factory that painted machinery. Prior to the outbreak of the war in 1939, Margalit learned more about the situation and what it meant to be Jewish learning from a rabbi while on vacation. On May 10, 1940 the Lujtens woke early to the noise of German planes, and German parachutists landed in Dordrecht to capture a vital bridge for their invasion. Two soldiers came to their house and told them to leave as they were planning to burn their neighborhood. The soldiers separated the men and women and locked them in a local school. The Dutch army fought back and in the fighting 18 people were killed. Margalit knew first aid and helped with the wounded. By September her father became involved in the resistance, and Margalit also assisted the underground. She relayed messages to people who remained in their homes. During the year 1943-1944 Margalit kept look-out on the train that went from town to the harbor to see if it was carrying weapons or German soldiers. Each day she sat in the apple tree near her house between 1:30 and 2:00 when the train passed. She then wrote a daily report of what she saw that was radioed to British intelligence. The reports now are in the archive of the Netherlands War Documentation Center.

The Dutch Nazis began to check to see which homes contained more than one Jewish family member. A friend who worked at the municipality gave her father a voucher saying that no one on the family was Jewish. This was valid until 1944 when they were told that they would be sent east for forced labor. Her father declared he would not go. He had a name of a friend from work who agreed to hide the family. The house where they were living was under surveillance all the time. On the morning of September 5, 1944 most of the Germans evacuated the area. The Dutch mistakenly through that liberation was imminent and that British troops would enter the town, but the city was actually not liberated until the end of the war by Canadian troops. After the war Margalit's father reopened his business.
Margalit who had become interested in Palestine even before the war, increased her Jewish connections after the war. She finished high school and two years of university before joining a hachshara in 1950. The following year she immigrated to Israel in 1951 where she became a microbiologist. She married and has three children and 10 grandchildren.