Four men pose next to a memorial marking the fifth anniversary of the Warsaw ghetto uprising probably in the Schlachtensee displaced persons camp. 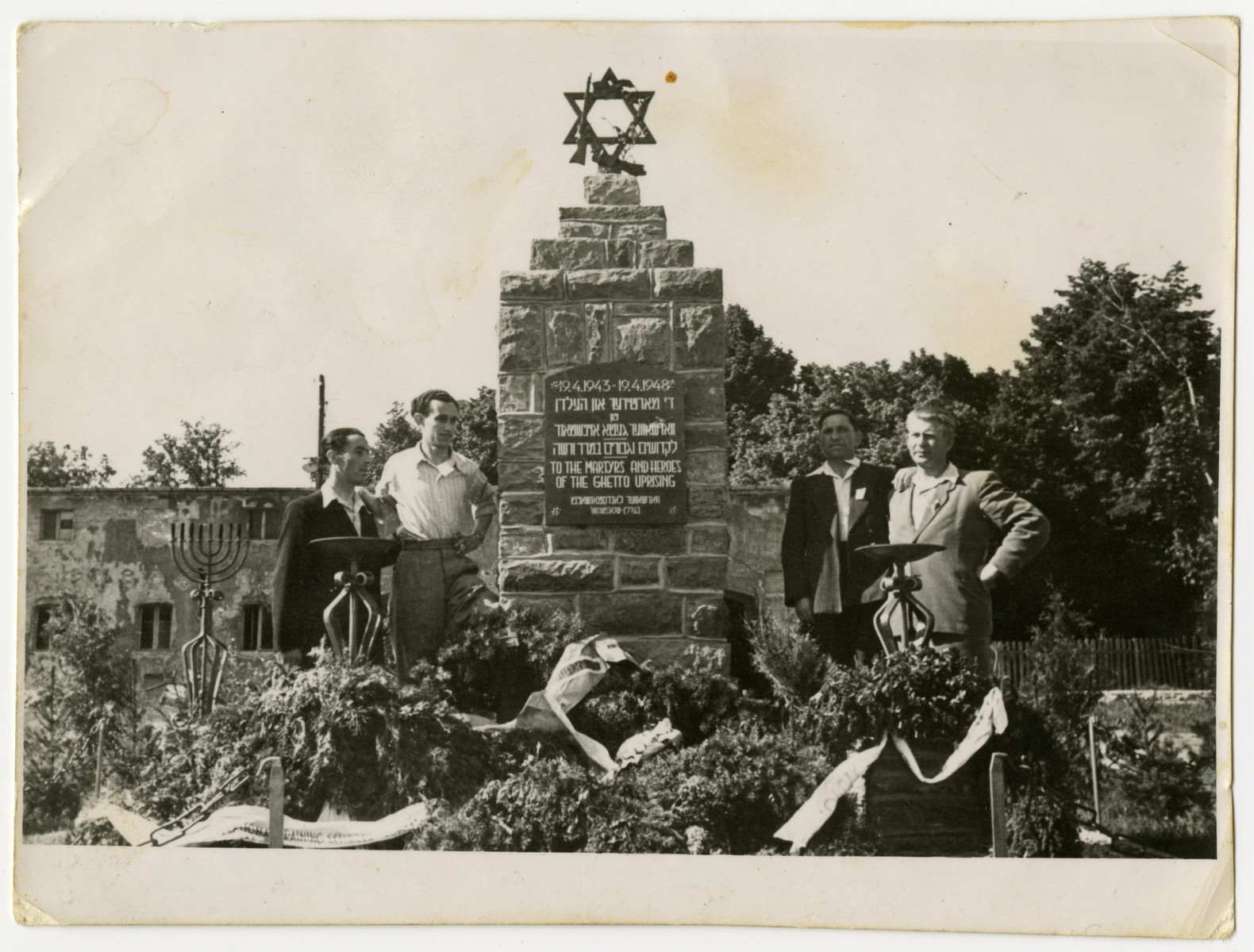 Four men pose next to a memorial marking the fifth anniversary of the Warsaw ghetto uprising probably in the Schlachtensee displaced persons camp.

Biography
Lisa Murik (lborn Liza Davidowicz, 1925) is the daughter of Elias (b. 1892) and Tauba Dawidowicz (b. 1891). Her parents both from the town of Kuniew in the Soviet Union, were the proprietors of a wholesale grocery business in Ostrog, Poland. The couple had three daughters, Liza, Ida (later Edith, b. 1927), and Chana (b. 1934), and raised them in a religiously observant household. With the arrival of German forces in July, 1941, the predominantly Jewish population of Ostrag came under the threat of Einsatzgruppen units that followed the Wehrmacht advance. One month later, in August, more than 1,000 men, women, and children were killed in the first of several mass killings targeting the Jews of Ostrog. The Dawidowicz family managed to survive one of these early actions when it was halted by a German military official who argued that the S.S. were wantonly killing able bodied persons who could be used for forced labor.

In June 1942 a ghetto was formed in Ostrog . The Dawidowicz family lived in the ghetto for three months before it became apparent that an action was imminent. Aware of German plans to liquidate the ghetto they prepared a hiding place where they remained until it was possible to escape to sympathetic neighbors. After briefly staying with former Gentile friends and acquaintences, Tauba left to find a more secure hiding place where the family would be able to remain indefinitely. She managed to find a sympathetic farmer's wife, Hopina Zygadlo, who agreed to hide the family in her root cellar. Hopina sheltered and provided for the Dawidowicz family for 16 months, even in the face of opposition from her husband who threatened to alert German authorities.

After the arrival of Soviet forces in 1944 the family left their hiding place and lived for a short time in a former Jewish house in Ostrog. During this time the family welcomed Misha Zilist in to their home and accepted him as an adoptive son, Misha, originally from Romanovka, was the sole survivor of his family. By 1945 the Dawidowicz family was living in Lodz where they had moved with hopes of leaving for Germany, and ultimately the United States. In Lodz Liza Dawidowicz met and married Abraham Murik who had survived the Holocaust in the Soviet Union. Ida too married a fellow survivor. The extended Dawidowicz family ultimately settled in the United States.