The Spielman family poses in a park either shortly before or shortly after the German invasion of the Netherlands. 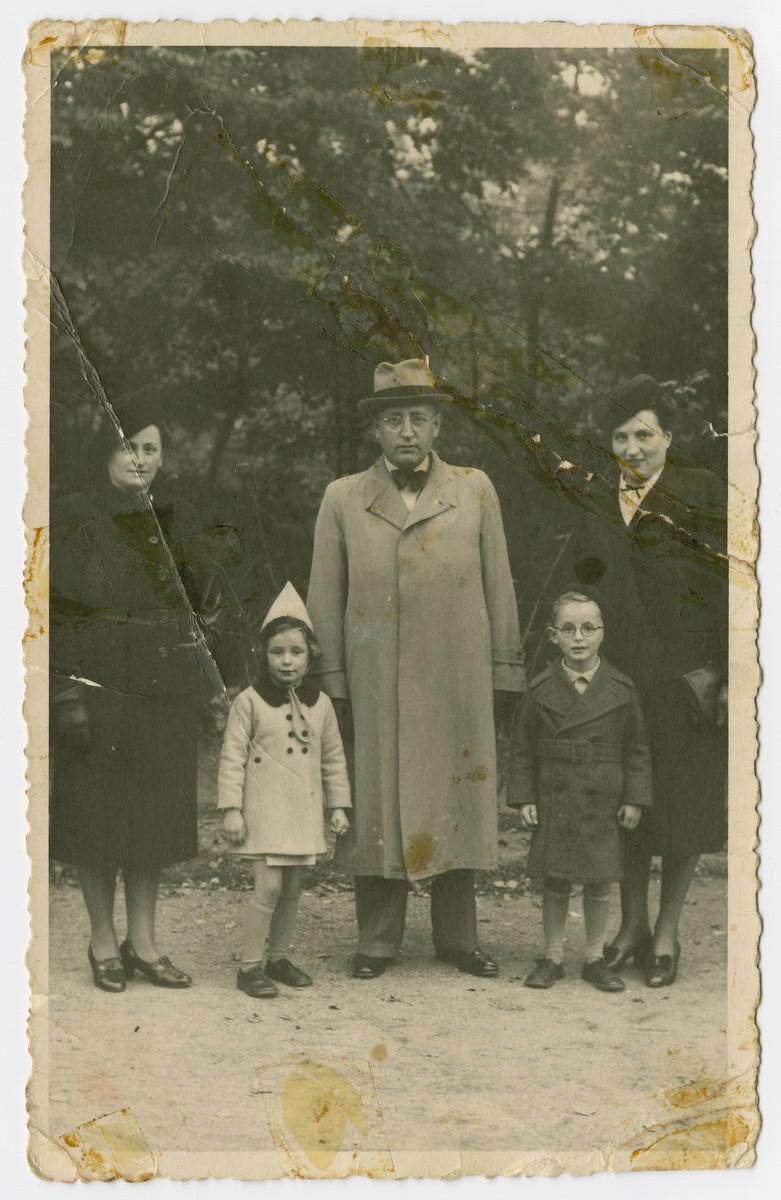 The Spielman family poses in a park either shortly before or shortly after the German invasion of the Netherlands.

Biography
Helen Hudes (the mother of the donor) was born in New York on July 3, 1905.  Her mother Annie (Chana) Weiss Hudes immigrated to the United States shortly before giving birth to Helen.  They lived in the US for three years before returning with her husband Isidor (Isaac) and their children back to Austria.  Helen was one of six children and her siblings were Donald, Michael (Max) Weiss [he took his mother’s maiden name as his last name], Joe, Henry, and Miriam. Michael Weiss was a successful entrepreneur.  He opened a shirt factory in Essen where Helen worked as a seamstress, and it was there that she met Alexander Spielman, an optician and founder of the International Optical Syndicate. Alexander was born September 15, 1905 in Przeworsk Poland. He had twin sisters Jeanette (Jenny) and Mira. The couple married in Germany and their son Bernhard was born there on February 20, 1932.

The family the fled Nazi Germany and came to Maastricht, Holland. Holland where their other children were born: Nathan (b. December 2, 1934), Hanna (later Schrob, b. July 5, 1936) and Edith (Edy, later Frankel, b. September 11, 1942). Nathan and Hanna received American citizenship at birth because of their mother’s citizenship.  The family attempted to get visas to the United States for Alexander, Bernhard and Edith, but were denied. When Edye was 6 weeks old, the Spielman family was denounced by the town’s mayor and deported to Westerbork. They arrived at the camp on October 23, 1942. Helen and the children’s identity papers identified them as American citizens.  Helen was still nursing Edye at the time, and her milk was running dry.  Edye became malnourished as a result, but one of the German guards smuggled food into Helen so that she could continue nursing her baby.  Alexander was separated from his family in Westerbork and sent to perform forced labor.

Helen and the children were deported to Libenau and then to the Vittel internment camp in France,which primarily housed people with American and British citizenship.  Alexander was sent to
Vittel on March 9, 1944 and reunited with his family after a two year separation. They were liberated by the Americans in September 1944. Helen, Edye, and Hanna appear in the March of Time newsreel outtakes documenting the liberation of the camp.  After liberation, the family was sent to the La Bourboule DP camp.  They arranged for passage to the United States on the USS Barry, a hospital ship for wounded soldiers and arrived in Boston on December 23, 1944.  They then took a train to New York City, arriving on December 25 th .

Though the immediate family survived, Alexander’s younger sister Mira, who lived with them, was taken prior to Edye’s birth was deported to Westerbork and subsequently killed at Auschwitz. Her twin sister Jeannette survived in hiding for two years, and Alexander sponsored her immigration to the United States. Max Weiss and his family (wife Helen and children Edith, Regina, Hanna, and Henry had left Maastricht for the United States in 1939.