Zvi's maternal grandparents, Mr. and Mrs. Izaak Weissbrod, pose on their porch after immigrating to Brazil. 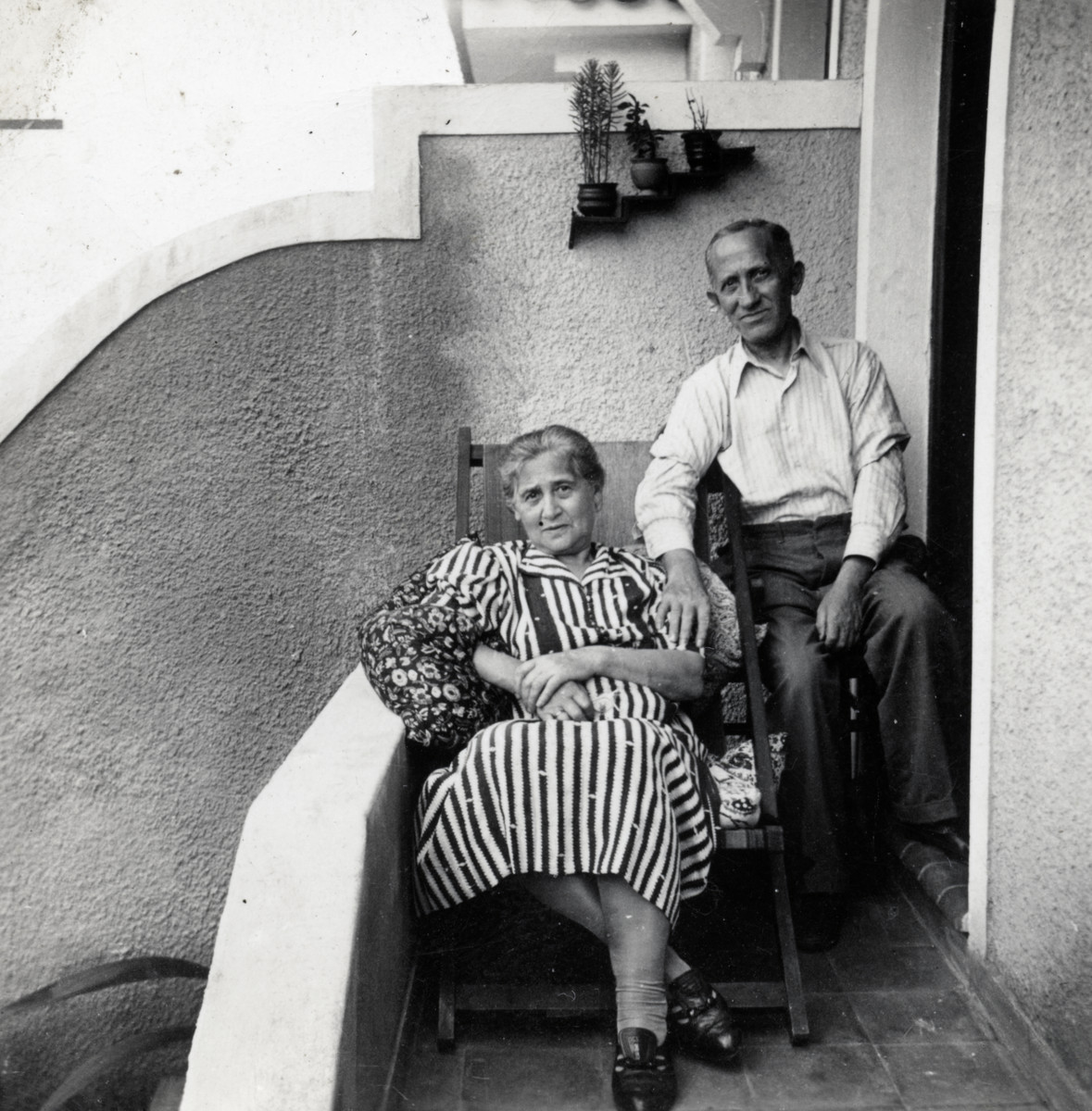 Zvi's maternal grandparents, Mr. and Mrs. Izaak Weissbrod, pose on their porch after immigrating to Brazil.

Biography
Zvi (originally Herman) Rosenbaum is the son of Rosa Weissbrod (b. Berlin, April 9, 1907) and Mojesz (Moses) b. Oct. 13 1906, Wysok Brzeg (near Krakow). Herman was born on March 20, 1937. Mojesz most likely left Poland for and apprenticed to Rosa's father Germany who was a tailor and had a large clothing factory. It was through his work that he met his wife Rosa who had two siblings, Jacques and Margot. Jacques had immigrated to Palestine and Margot had left for Brazil during the early 30's when Hitler rose to power. Rosa left for Holland together with Mojesz, and they married in 1935 or 1936. At the beginning of the war, Izaak Weissbrod (donor's grandfather) was sent to Dachau but since he could prove that his daughter was living in Brazil he was released and followed her there.

Mojzesz and Rosa lived on Waalstraat Street #62 in Amsterdam. Mojesz had a tailor shop above their apartment and employed a few workers until they were deported. Rosa handled the administration and accounting. In the summer of 1942, two people arrived at the apartment and spoke Dutch to his parents. One evening a few weeks later the family removed their Jewish stars and went to the Amstel railroad station in S. Amsterdam accompanied by Clemens Bessons. They were taken to the village of Driebergen where they remained together until 1943. That summer the Dutch police arrested the Rosenbaums and another family and brought them to Amsterdam. After spending a night at the police headquarters the group was sent to the Schouwberg Theater where Herman was separated from his parents. Children up to the age of 13 were sent across the street to a creche. The day after his arrival Herman took ill and was sent to the infirmary. Clemens Bessons found him there and told him he was taking him to stay with him. Walter Suskind was involved in his rescue as well as most of the children who were whisked away from the crèche. In the theatre a card system had been set up and Suskind had a way of removing the names of the children who were taken out and put in hiding places, but only with permission of their parents.

Herman remained in Amsterdam with the Bessons for a few months. When it became too dangerous, he was sent to another family by the name of DeVries where he again stayed a few months and was then transferred to the Kleibrink family where he remained till the end of the war. Both families lived near each other. Herman attended a Protestant school for first grade but when he met the DeVries' daughter there he was not allowed to continue for fear that he would divulge something and that both families could get into trouble. Holland was liberated on May 5th, 1945, and Herman was able to return to school where the children were surprised to see him.

He remained with the Kleibrink family until the summer time. One day Netti Busnac, a good friend of his mother. came to visit him together with a cousin of Herman's father. A few weeks later a British soldier arrived and took him to the Bergstichting children's home in Laaren. This was a home which was run by the Jewish community even before the war and where Jewish kids were assembled after the war. He went to a Jewish school in Laaren and recalls a large party that year celebrating the festival of Hanukah. Shortly after he was told that he had a visitor who was the brother-in-law of Zvi's uncle and a member of the Jewish brigade from Palestine. Only then did he learn he had family in Palestine, and only in the summer of 1946 did he learn that his parents had been sent to Westerbork and Sobibor where they perished on July 2, 1943.

Herman remained in Bergstichting until the summer of 1949 when he finished elementary school. He began to receive letters from his grandparents in Brazil as well as from an aunt. That same year, his mother's friend Netti Busnac wanted to visit Israel to meet a friend. Since Herman's uncle, Jacques, also was living in Israel, she brought Herman with her to live with his uncle. Prior to leaving Holland Herman said goodbye to all of the families that had hidden him. He lived briefly with his uncle in Sde Warburg and later moved to the Aliyat Hanoar school at Havat Hanoar Hazioni in Jerusalem where he lived from 1949 until 1955. Zvi enlisted in the artillery unit of the Israel Defense Forces and also began to study accounting, while at the same time signing on as a professional soldier for 4 additional years. He then worked for 30 years as a computer programmer and systems analyst.