Passport issued to Else Hildegard Bissinger (mother of the donor). 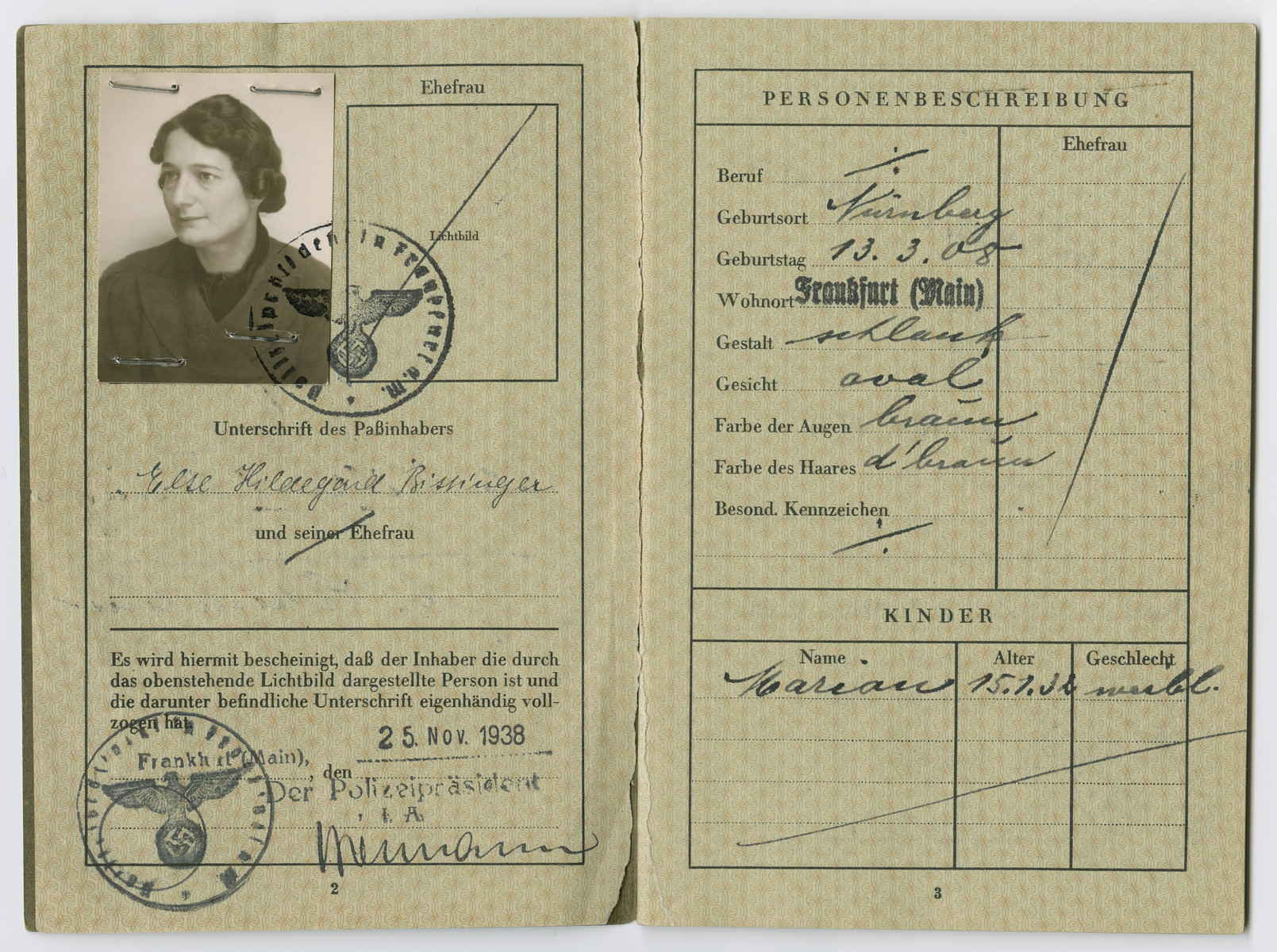 Passport issued to Else Hildegard Bissinger (mother of the donor).

Biography
Claude Loewenstein was the son of Armand (b. Luxembourg) and Henriette (b. France) Loewenstein. He was born on February 12, 1928 in Luxembourg where his father owned a shoemaking supply business; his sister Fernande was five years older. On May 10, 1940 German units first entered Luxembourg. For the first few months, life continued more or less normally. Armand reopened business and even sold supplies to German soldiers. However this changed by late summer when German Civil authorities moved in, annexed Luxembourg and instituted anti-Jewish measures. Armand's business was confiscated, and Claude was forbidden to start high school. That fall, most Luxembourg Jews were sent to neighboring France. For several days they were shuttled back and forth between towns in the occupied and unoccupied zones until a train brought them to the Gurs internment camp in southern France. Claude and his father lived in one part of the camp, and Fernande and their mother in another, but they were allowed to visit during the day. In December, Armand's sister and brother-in-law, Celestine and husband Alfred Weil, arranged for their release, and the Loewensteins left the camp the following month. For the next twenty-two months they lived openly in the small town of Saint Antonin inTarn-et-Garonne. They had to report to the police, were assigned residence, could not seek employment or leave the town, but otherwise were not restricted. Claude attended an excellent high school, and his father grew vegetables for family. Then in August 1942, French police came to their house, told them to pack bags, and escorted them back to Gurs. The camp was divided into subdivisions called Ilots. Claude and his father lived in the French section where conditions were somewhat better than in the rest of the camp. Friends from St. Antonin sent them food packages, and Claude even received rudimentary Hebrew education and celebrated his bar mitzvah while in the camp. So as not to be idle, he applied to the head prisoner of the Ilot to become a messenger boy and was given a pass and bicycle to perform his work. He all received passes to visit his mother and sister during daylight hours. He also applied to work for a farmer outside the camp who was seeking young men to help with his fruit crop. However, before his application was processed, his non-Jewish aunt negotiated for the family's release and they went to the small village, Saint Romain d'Urfe. One day a runner came to say someone was trying to call him. He got to the village and received a phone call from the farmer had traced him to ask if he was still interested in working there. Claude went to the farm and joined a group of about 15 young Jewish men. The rest of his family remained in the village. The boys worked picking and transporting up to 20 tons of a day. One day in July 1944 a cell from the underground Franc-Tireurs et Partisans raided the farm to search for gasoline. They also asked the Jewish farm hands if they cared to join the cell. All 15 teenagers left with the partisans. England gave the partisans orders for their operations, guns and ammunition which they provided by parachute drop. In one operation the partisans climbed a mountain over-looking a road and dropped home-made grenades on an open truck filled with German soldiers thereby disrupting the convoy. The partisans then opened machine gun fire on the Germans. Claude, now sixteen years old, also participated in the liberation of Lyons. After the war ended, Claude reunited with his family and then returned to Luxembourg in early 1945. He was met by an aunt who remained in Luxembourg for the entire war since she was married to a non-Jew. Claude's parents returned a few weeks later. Claude's father reestablished his business. Claude helped out father before joining the Luxembourg army and serving in the occupation of Bitburg near the Luxembourg border. Claude served for six months and went to England to study tanning and shoe making at a technical college. After his training, he again returned to Luxembourg and opened his own retail stores before immigrating to the United States in April 1956. Claude married Marion B. the following year.