The Vogel family walks down a street while on vacation in Italy. 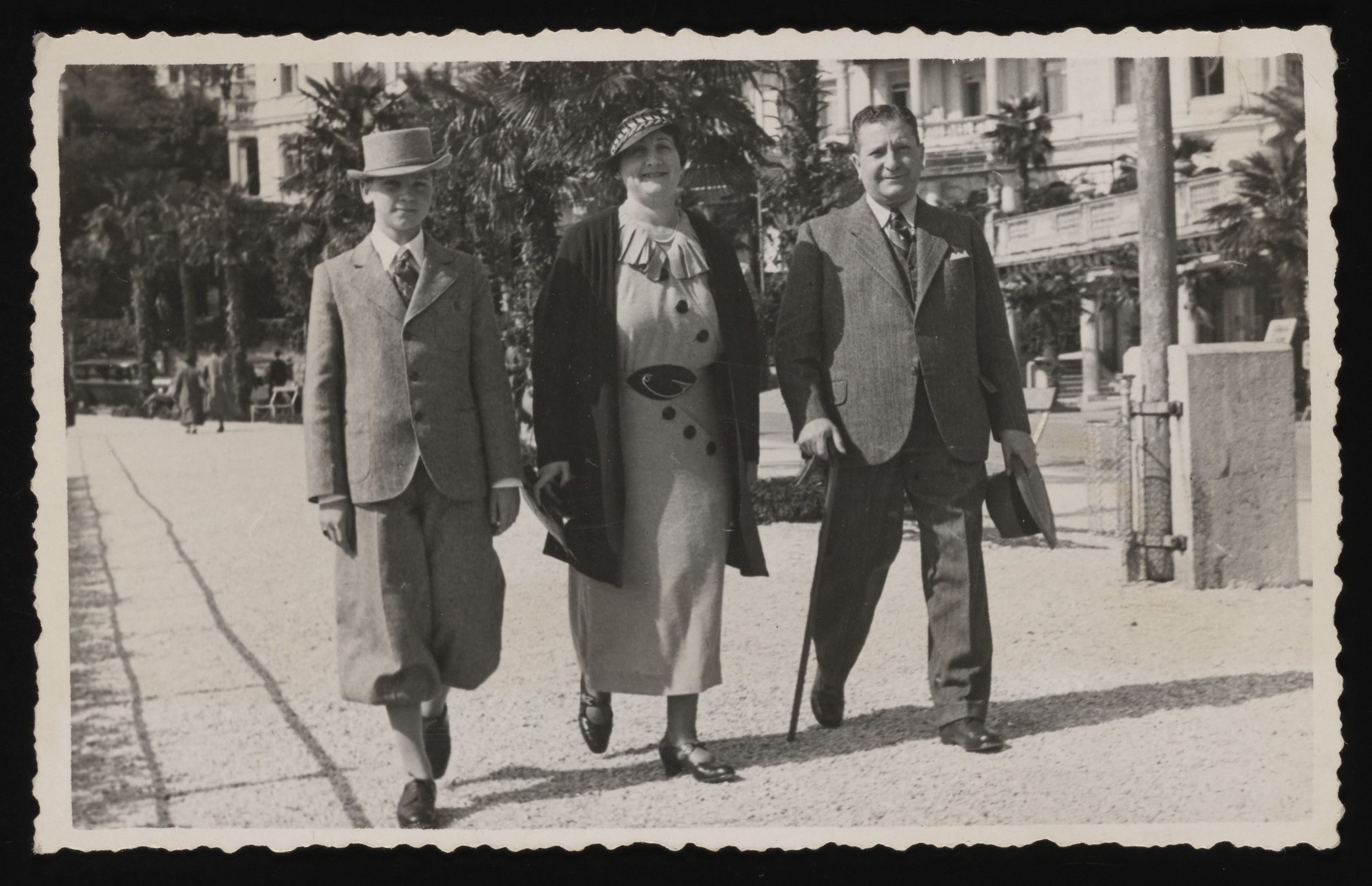 The Vogel family walks down a street while on vacation in Italy.

Left to right are Steven, Wilma and Odon Vogel.

Biography
Eva Cooper (born Eva Brust) is the daughter of Elek Brust (b. 1899) and Livia (Lilly) Schwarcz Brust. Eva was born on March 18, 1934 in Budapest, Hungary where her father owned a wholesale paper box company. The family lived a comfortable life in the center of the city and attended the Dohány Street Synagogue. Eva attended a public school which offered religion classes for both Jews and Catholics. In 1939 her maternal grandparents came to America to attend the New York World's Fair. They remained in New York and reestablished their prosperous watch business. Lilly's younger brother Leslie Schwartz joined them in 1942. He later joined the US Army and participated in the Normandy invasion. In 1941 Elek was taken to a labor camp with other Hungarian Jewish men. At first Lilly could visit him weekly and bring food and other necessities. Through the black market, Lilly obtained papers to release him from the camp. However by the beginning of 1944 things had gotten much worse. Then on March 18, 1944 while Eva was celebrating her 10th birthday, Nazi troops entered Budapest. The Nazis soon designated special buildings for Jews to live. Elek used his connections to designate their building as a Jewish residence. Though the family did not have to move, they had to share their apartment with family and friends. Elek was forbidden to work, but Eva and a friend collected cigarette butts, and then sold new cigarettes that they rolled from the unsmoked tobacco.

Conditions continued to deteriorate through the spring and summer. Eva's father was very active in the Jewish community and was among the community members who assisted in the negotiations with Adolf Eichmann to delay for the deportations from Budapest. He also applied for Swedish papers from Raoul Wallenberg, and each member of the family received a Schutzpass. However, Eva's parents did not want to move to Wallenberg's safe house, fearful that the large crowd of Jews there would attract Nazi soldiers. In mid-October 1944 the Brusts decided to leave their home. Eva and her family dressed in layers and packed what they could carry. They went to one her father's apartment buildings where the superintendent gave them a place to stay in an abandoned apartment. They spent most of their time inside the apartment hiding with the help of the superintendent. During the winter of 1944-45 the war drew closer to Budapest. After learning that soldiers were coming into the city so they slowly walked out into the country, traveling by night and dodging bombings. At one point they, along with other fleeing Jews, were rounded up on the road by Nazi soldiers. They were asked for their documents and lined up in a firing line. Luckily a bomb was dropped nearby and the soldiers ran for safety allowing those they had rounded up to run as well.

Eva and her parents ended up at a family friend's house in the country where many others were hiding as well, they witnessed people being shot outside. Eventually they left the country and walked to the small town of Erd where they ended up hiding in someone's basement with many others. They slept on the floor and bartered for whatever goods they could. In 1945 they returned to Budapest. During their travels they saw piles of animal and human bodies and rubble from the bombings. Eventually they made it back to their apartment in Budapest. Though their home had been looted, it was in relatively good shape. Soviet troops liberated Budapest in January 1945. That spring Elek restarted his business and successfully recovered hidden gold and jewelry. However, by late 1946 Soviets occupied Hungary instituting a Communist regime. Eva's grandfather sent them packages from the United States with items they could use for barter. Using the money they had managed to collect in the year after the war as well as what they had hidden her family applied for visitors visas to America with the knowledge that they would not return to Budapest should the Soviets take power. They traveled from Budapest to Paris to London and then sailed to America on May 21, 1947. They settled in New York City where her father went to work with her grandfather at his watch business. That summer Eva attended a summer camp with other Jewish girls. She assimilated quickly to life in New York and began 8th grade that fall. Her family's belongings were sent from Budapest, though the Soviets confiscated many of their valuable such as paintings and books.

Though Eva and her parents survived the Holocaust, two members of their family who had stayed with them from March to October of 1944 had perished along the Danube. Her father had to identify their bodies using their teeth. Most of their other family had been sent to Auschwitz where one of her cousins had been used in human experiments by Dr. Mengele. He survived and recuperated in a hospital in Switzerland.