Jewish youth leaders celebrate with an accordion and bottles of champagne at a party in Mannheim. 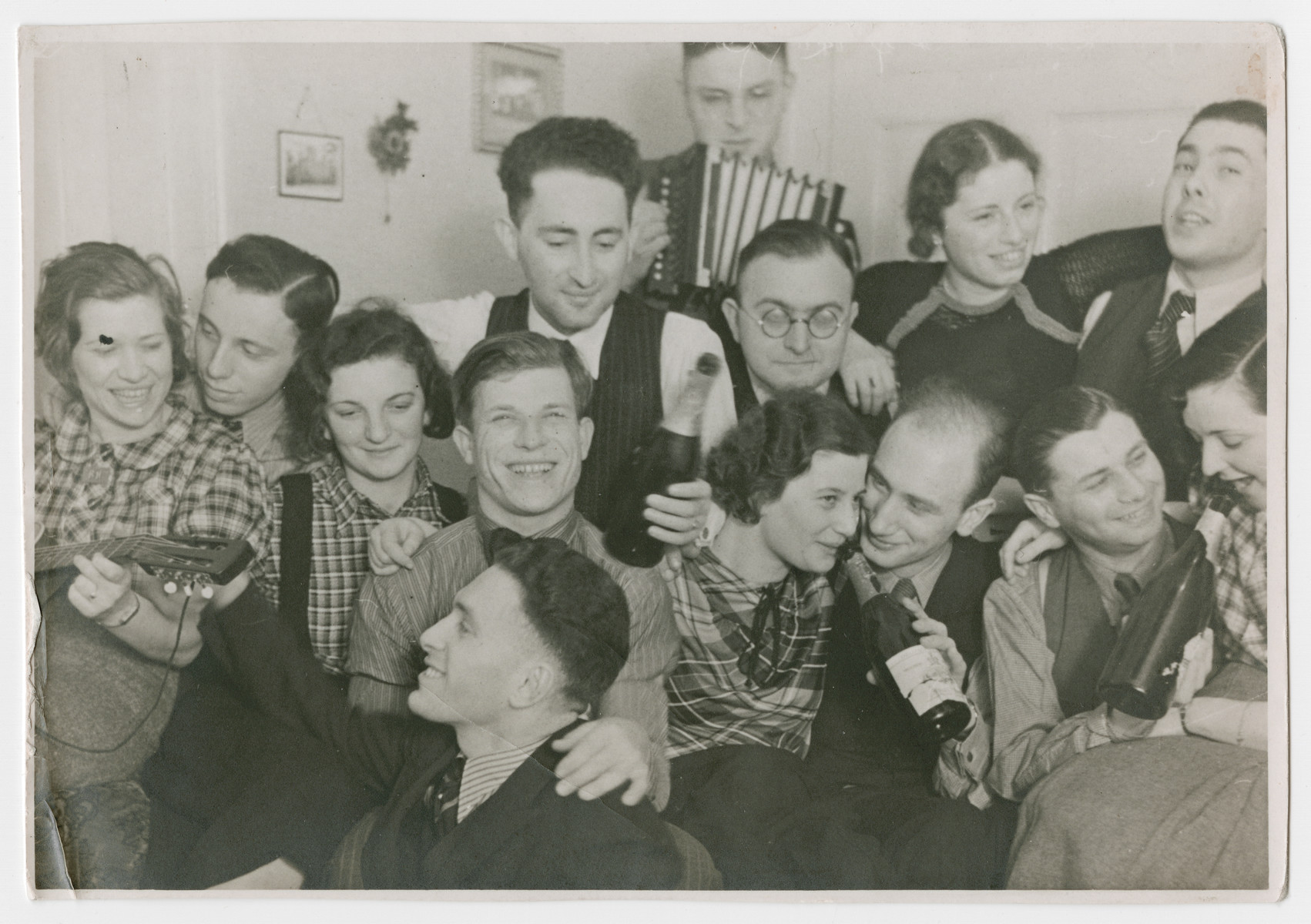 Jewish youth leaders celebrate with an accordion and bottles of champagne at a party in Mannheim.

Eric Sonnenmann is pictured in the center holding a bottle.

Biography
Eric Otto Sonneman (born Erich Sonnemann, the father of the donor) was the son of Kurt and Berta (née Herrmann) Sonnemann. He was born on December 1, 1910 in Neustadt an der Haardt, Germany. His brother Max was born in 1915. When Eric was four years old the family moved to Mannheim where his father worked as a theater and music reviewer. In the 1930s Eric worked as a pharmacist's apprentice but was summarily fired because he was Jewish. Since he needed a profession to facilitate his eventual immigration, he obtained a job in Heidelberg as a photo-chemist developing color film. After Eric received an affidavit from a distant relative Emma Loveman, he applied for a United States visa in 1937. A few days before the outbreak of the Kristallnacht pogrom in November 1938, Eric moved to a new apartment. This ended up saving him from arrest since he had not yet registered with the police. A non-Jewish friend who belonged to Nazis party came and warned him that the Nazis were planning to arrest Jewish men to concentration camp. He also hid Eric's belongings until the danger had passed. The day after Kristallnacht Eric had an appointment at the American consulate in Stuttgart to receive his visa. He passed by the synagogue on route to the train station and found the Torah scrolls laying outside. He picked them up and brought them inside. Eric then took a fourth class slow train to Stuttgart since thought he would less likely be harassed. He arrived at the consulate and received a medical exam. The consul told them he could not get a visa since the physician had discovered he had a hernia. Eric was told to return in six weeks after he had an operation. After his return to Mannheim, Eric went straight to hospital for fear he would be arrested if he returned home. He had the operation the next morning and was released ten days later. After receiving his visa, Eric arrived in New York on March 17, 1939 and stayed a relative in Nashville, TN. He then moved to Chicago where he worked as a photo finisher. His brother, Max Sonneman, joined him in there later that year. Eric helped his parents escape Nazi Germany, writing letters to many governments, including Canada, Great Britain, Sweden, Mexico, Denmark and Switzerland, requesting temporary visas. Although all his requests were refused, his parents finally U.S. visas in the summer of 1940. Because passage by ship from Western European ports was no longer possible, they traveled by train through Russia, China and Japan, and then to the States where they reunited with their sons in Chicago. The brothers later founded the Merix Chemical Company (the name is a combination of their two first names) and received several patents. Eric married Edith Arshack in August 1941 and became a naturalized citizen on July 13, 1943.


Though Eric and his immediate family survived the Holocaust, his aunt Frieda Hermann Berger who lived with the family was deported from Mannheim to Gurs in October 1940 and then to Auschwitz in August 1942 where she perished. His Aunt Else, a doctor from Munich, Uncle Moritz Hermann and his son Adolf Hermann were also killed.