European flags are hung on the facade of the Ring-Messhaus in Leipzig, Germany. 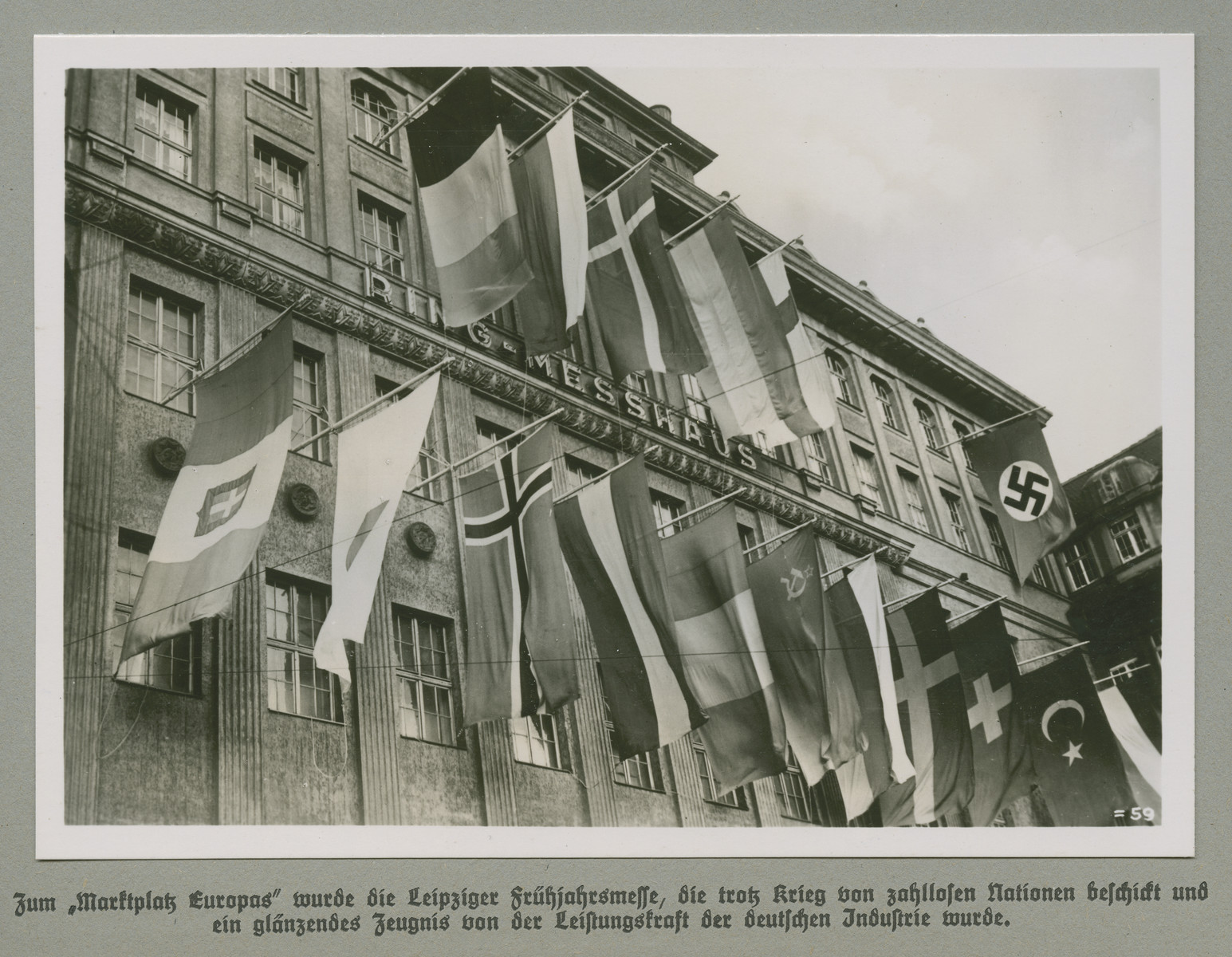 European flags are hung on the facade of the Ring-Messhaus in Leipzig, Germany.

The original caption reads: The Leipzig Spring Exhibition became "Europe's Marketplace," which in spite of the war has been fueled by countless Nations, and was a gleaming testimony to the power of German industry.

Biography
Heinrich Hoffmann (1885-1957) was Hitler's official photographer and personal friend. The son of a professional photographer, Hoffmann learned his trade as a young man working in his father's studio in Fuerth. He honed his skills during WWI when he served as a photographer in the Bavarian Army. Hoffmann first met Adolf Hitler in Munich in 1919 and a close personal and political relationship soon developed. It was Hoffmann who introduced Hitler to Eva Braun, then an employee in Hoffmann's photography studio. In 1920 Hoffmann joined the Nazi party and began his career as the Fuehrer's personal photographer. He accompanied Hitler on all his travels during the period of his rise to power and joined him on his tours of the various fronts during WWII. For much of Hitler's political career Hoffmann was the only photographer permitted to take his picture. It is estimated that Hoffmann took over 2.5 million photographs, a portion of which were published in a long series of photograph albums that appeared in the 1930s. Royalties from the use of these images made both Hoffmann and Hitler extremely wealthy. After the war the U.S. Army seized the portion of the Hoffmann collection that was stored in the town of Winhoering. Part of this archive was then sent to Nuremberg for use by the War Crimes Commission. From Nuremberg this archive was transferred to the Army's Historical Division in Frankfurt in April 1949, and from there to the Army's German Military Documents Section in Alexandria, Virginia in October 1949. Other parts of Hoffmann's collection were seized by the U.S. Army in Freising and Bavaria and by a Time-Life photographer in Berlin. Heinrich Hoffmann himself was arrested in 1947 and tried by a West German court as a Nazi war profiteer. He was sentenced to ten years imprisonment (later reduced to five) and most of his personal wealth was confiscated.

[SOURCES: R. Wistrich, Who's Who in Nazi Germany, 155; Encyclopedia of the Third Reich; Records of the District of Columbia District Court: Hoffmann vs. United States of America]