Louis Baars repairs his bicycle by the side of a road. 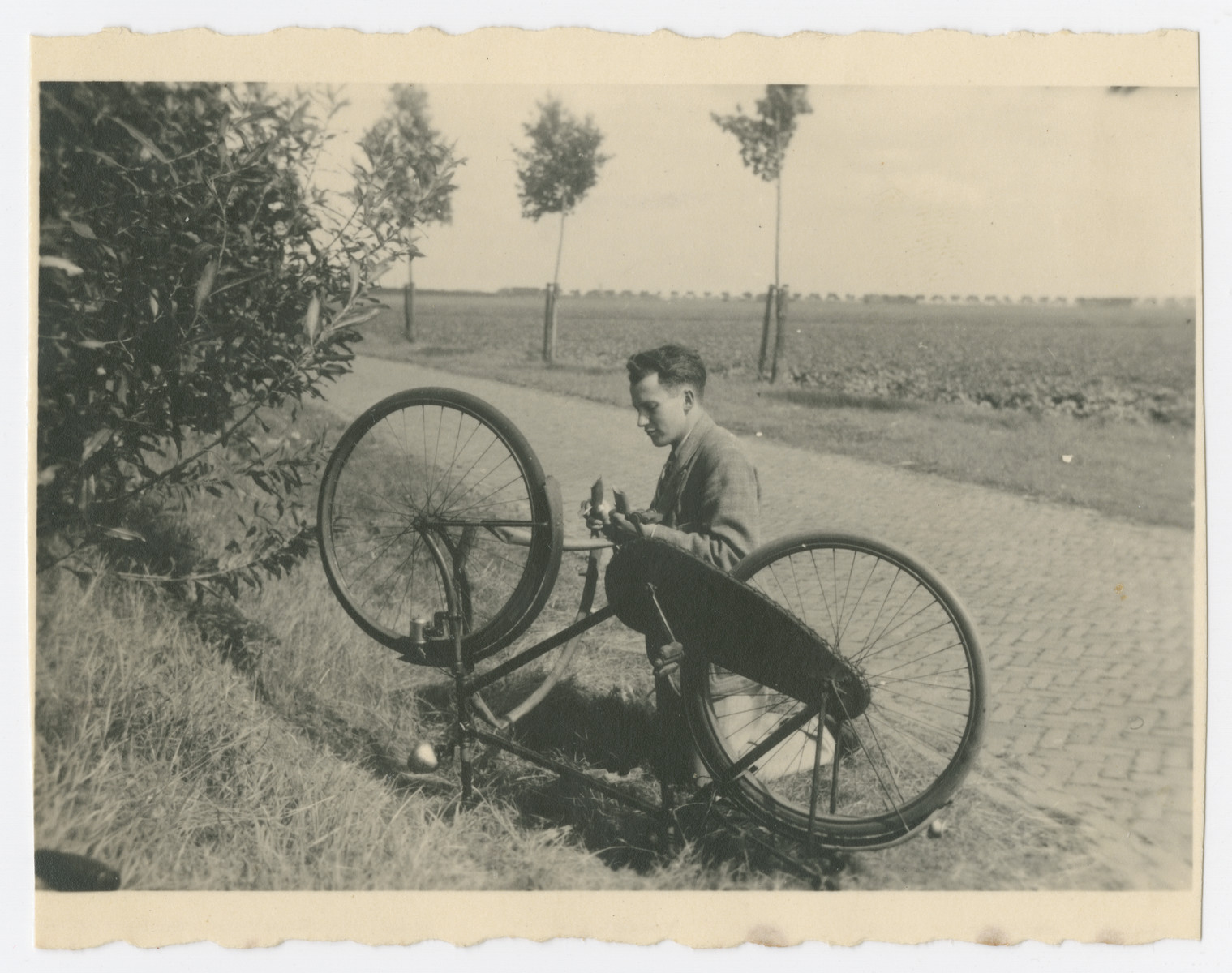 Louis Baars repairs his bicycle by the side of a road.

Biography
Leah Brounstein Baars, known as Ineke as she grew up in the Netherlands, was born in hiding during the Holocaust to Louis and Engelien (Lynn) Baars on February 10, 1944. Her family survived the war in hiding at the home of the Catholic couple, Frans and Mien Wijnakker, in southeastern Netherlands.
Frans (Franciscus, b. 1908) and Mien (Hermina, b. 1913) Wijnakker were born in Haren and moved to Dieden when they married in 1936, all in the province of North Brabant. They had four small children during the time of World War II -- Nellie, Jan, Thijs, Frans Jr. -- and a fifth born right after the war in June 1945, Irene. Frans worked as a grain miller, but during the war, when Holland was under the brutal and oppressive occupation of Nazi Germany, he took a leave of absence from this job. He engaged in a black market business of selling meat and eggs to people in the cities.

In 1943 during a business trip to Amsterdam, Frans went to the home of a doctor acquaintance. Knowing Frans lived somewhere in the countryside, the doctor asked him if we would be willing to temporarily house a child for three weeks. Frans agreed and returned home with an underfed, fourteen-year-old Jewish girl, who used the false name, Freetje DeGroot. Freetje's actual name was Shulamit Laub, and she was born in Germany on May 12, 1928. She and her five siblings were able to get into Holland in late 1938 after Kristallnacht, when the Dutch government agreed to let in a few thousand unaccompanied children as long as Dutch Jewish families would take them in. When the German occupation got severe, Shula and her siblings went into hiding in Amsterdam. But the chances of surviving the war in the major cities where the German presence was strong were slim.

Mien agreed to keep the girl and soon Frans brought her younger brother Avraham out of Amsterdam to stay with them as well. He was given the Dutch name of Fritsje. Their younger sister Sara came next. She lived with Frans and Mien for a short while and then was placed with another family in the region. A short time later a teenage Jewish girl of 17, with the false name of Agnes, was brought to stay at the Wijnakker home. One day a member of the Dutch resistance group that hid people from the German authorities, Landelijke Organisatie, approached Frans. He asked Frans if he would help recruit people in their small town area to take in Jews, promising that the underground would help supply funds to care for the Jews. Frans and Mien agreed to help. This venture then took over their whole life; Frans built a network in the local area of people who would shelter Jews, and he and Mien housed sometimes up to ten Jewish refugees in their own home. Cor Van Dooren, a local government inspector helped Frans obtain more food and kept him informed of any dangers.

The challenges and dangers proved to be immense. There were many difficulties in managing this network of paid helpers under the constant threat of raids, with two real ones occurring. In addition, the Wijnakkers faced the possibility of being evicted from their rental home and of having Frans sent off to forced labor in Germany. The local police chief, always suspicious about what Frans was up to, was a constant threat as well.

Possibly the biggest challenge the Wijnakker couple faced was related to the first adults they took into their own home. In fall 1943, the first adult Louis Baars came to stay with the Wijnakkers. He was a trained architect and used his skills to build a safe hiding room in their house. His wife Engelien (Lien), who had worked as secretary for the Jewish Council, got out of Amsterdam through the L.O. a short time later. Frans first placed her with a friend in the region, the sister of Cor Van Dooren. But after the parish priest found out, he pressured her to send this Jewish woman away. Engelien, now forced to leave, was fortunately able to make her way to the Wijnakker home and reunite with her husband Lou.

Frans and Mien were fine with Lou and Engelien staying together in their home. But a short time later Engelien confessed that she was pregnant, a near impossible dilemma for the Wijnakkers to deal with under the occupation of Nazi Germany. Even though a crying infant could endanger the entire household, Frans and Mien decided to help, with the strategy that however they got the baby born, they would register her with the authorities as their own child. The Baars couple agreed with this strategy. Mien then pretended to be pregnant and even went out of the home with a pillow hidden under her clothing. After much effort and consternation, Frans was able to find a doctor to handle the delivery and arranged for Engelien to give birth in a convent in the nearby town of Ravenstein. Around the time of birth the young father, Louis Baars, stayed for a few days in the house of Cor van Dooren, who lived near the convent, so that Louis could visit his wife and the newborn baby. After Engelien safely delivered her child, Frans registered the infant, as his and Mien's own daughter, giving her the false identity Francisca Corrie Wijnakker, The baby's true name was Leah Baars, often called by the nickname Ineke. Mien gave the baby plenty of fresh air and brought her to doctor appointments.

Allied forces moved the Germans out of this area in September 1944, but safety did not come until the Netherlands was fully liberated in May 1945. All of the Jews that the Wijnakkers had hidden in their own home and through the network survived; over two dozen in total were saved. After the war, Louis and Engelien Baars registered their daughter under her real name of Leah and moved to the city of Eindhoven in south of the country. On March 21, 1946, Engelien gave birth to a boy they named Bernard, after Louis' father who perished in the Holocaust. The Baars family visited the Wijnakkers every summer before immigrating to the United States in late 1957. In November 1983 Yad Vashem honored Frans and Mien Wijnakker as Righteous Among the Nations.

[Source: Marty Brounstein, "Two Among the Righteous Few: a Story of Courage in the Holocaust," Tate Publishing, 2011] (Marty Brounstein is the husband of Leah Baars.)