Lenke Gruenberg poses in her Betar uniform outside the Deggendorf displaced persons camp. 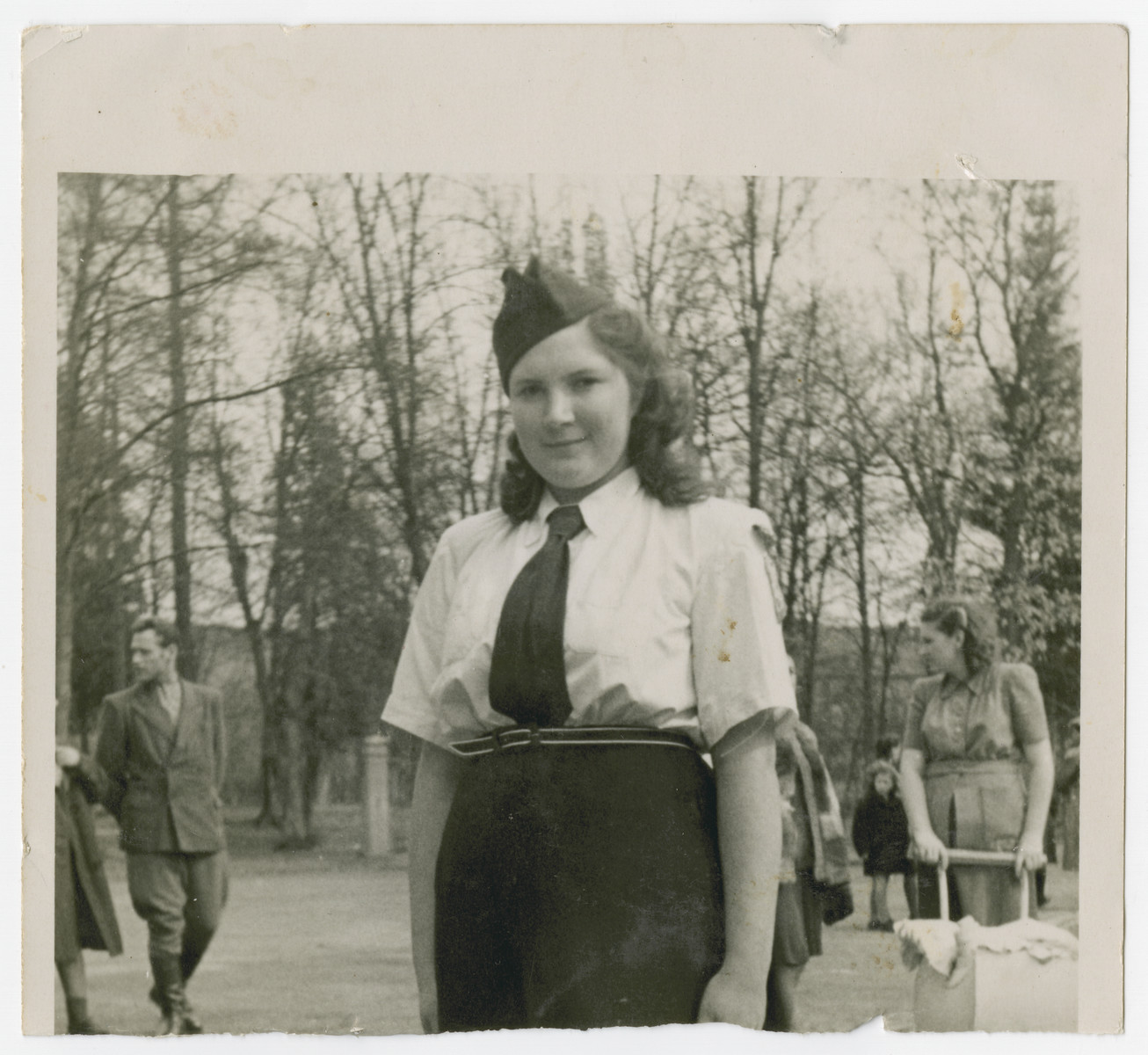 Lenke Gruenberg poses in her Betar uniform outside the Deggendorf displaced persons camp.

Biography
Leah Press Kalina (originally Lenke Gruenberg), the mother of the donor) was the second oldest daughter of Eli (Illes) Gruenberg (1889-1944) and Sheindel (Zseni) Schwimmer Gruenberg (1902-1944). She was born on September 14, 1929 in Cierny Potok, Czechoslovakia. This town was located close to the Carpathian Mountains. Her father was a businessman who owned a farm and maybe a mill. She had three sisters Ruchel born in 1928, Bluma born in 1930 and Malka born in 1936. In March 1944 Germany invaded Hungary and the Transcarpathia region unleashing the full brunt of the Holocaust. On April 9, 1944, the second day of Passover, policemen warned the town's few Jews against celebrating Passover, but the family went ahead, albeit tense and frightened. Lenke saw her father cry for the first time as he sensed it was probably their last Passover. The next day the police forcibly removed them from their modest home and sent them to the Mukacevo ghetto. One month later on May 11, 1944, they were transported to Auschwitz in a crowded railcar. On arrival, her parents and youngest sister Malka were immediately sent to the gas chambers and killed. Lenke, Ruchel and Bluma, were sent to the barracks after their heads were shaved, the first step in the dehumanization process. At first Lenke didn't even recognize her sister without her hair. Other girls in the barrack told them about the crematoria and the fate of the rest of their family. A few weeks later, they were moved to the Plaszow concentration camp where conditions were even worse than Auschwitz. Lice were rampant. They labored 12 hours a day hauling stones. Guards shot and beat prisoners without warning and German shepherds dogged their heels.

Lenke's younger sister Bluma started to weaken. To try to conserve energy, the sisters would try and hide a piece of bread from their rations to eat later. One day, when the sisters were looking for the stash, they discovered it was gone. Another girl confessed in tears to having taken it to alleviate her own hunger.
In August 1944, they were transported back to Auschwitz. Lenke was tattooed with the number A-21653 on her left arm. After arrival, there was another selection, and the worst happened. Bluma was clubbed to death. In the fall of 1944, Lenke and Ruchel were transferred to Bergen-Belsen. From there they were sent to Buchenwald where they arrived on December 17, 1944. For the final months, they were in the Markkleeberg sub-camp called. After surviving a death march, Lenke and Ruchel were finally liberated. After the war they lived in the Deggendorf displaced persons camp. Lenke joined the Betar Zionist Movement in 1947 before immigrating to the United States that year. Ruchel married Herbert (Herschel) Kirschner in Deggendorf in 1947 and then also settled in the United States. Leah married Gershon Press, a Holocaust survivor of Dachau, in 1948 who she met in Philadelphia. After Gershon died in 1970. She married Harry Kalina in 1975. He died in 1992. She has two daughters Shirley born in 1951 and Barbara born in 1953. Ruchel and Herbert Kirschner both died in 2012. They had three children - Jacob (1949-1949), Philip born in 1952 and Beverly born in 1958.