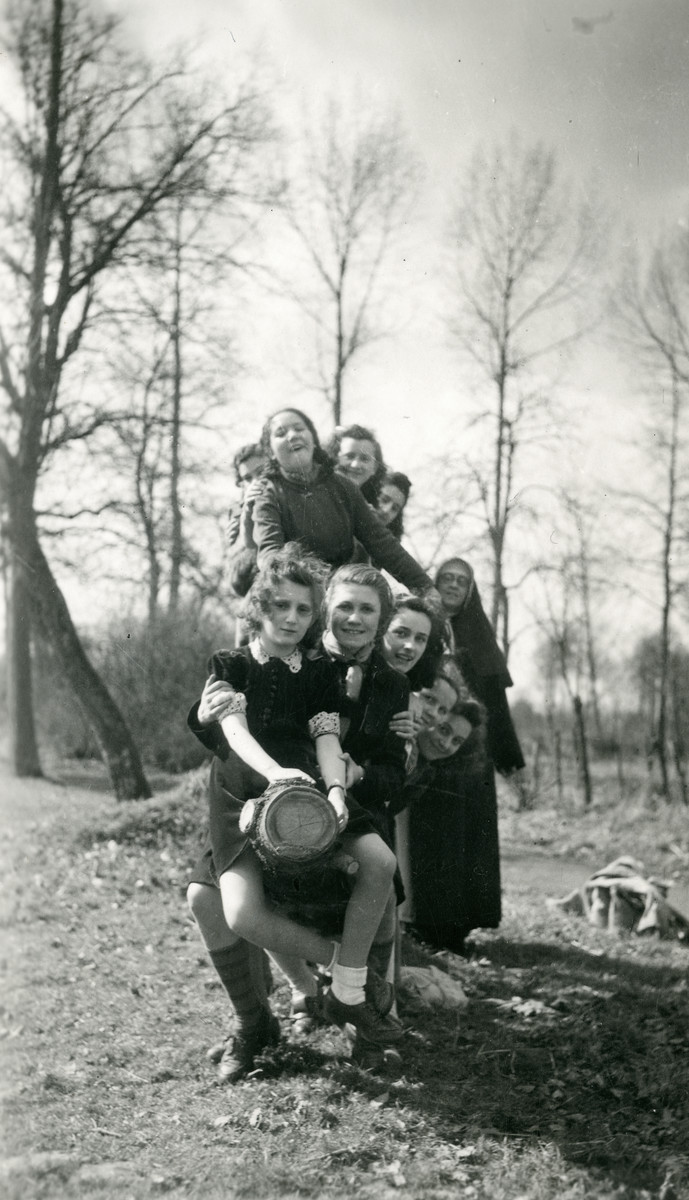 Liliane Ferdman is pictured in front holding the log of a tree.

Biography
Liliane (Luba) Ferdman Gildor (donor's mother) was the youngest child of Ephraim Fiszel (n. birth date) and Guta Ferdman (16.4.1894). She was born on Sept. 22, 1931 in Warsaw, Poland. She had three siblings: Zosia (b. 1916), Adam (b. 1914) and Suzanne (b. 1930). Their father imported and exported fabric and sewing supplies. The family was quite well off and owned an apartment building
in Warsaw. In 1933 the family left for Belgium to seek a less antisemitic environment, where Guta had a sister already living in Brussels, married to a chemist. In Brussels Fiszel had a sewing supplies wholesale business. In May 1940 Germany invaded Belgium, and their life changed. Everybody went into hiding in 1942 and Fiszel and Guta placed their two youngest daughters in the convent of St. Antoine de Padue in Sint-Pieters-Leeuw not too far from Brussels. Zosia was already married and was pregnant. She, her husband Jules and Adam tried to reach Switzerland. For some reason Adam managed to enter but Zosia and Jules were arrested at the French/Swiss border, released, and went to Nice (France). There they met a police inspector and became somewhat friendly. They were arrested again and sent to a French Camp in Southwest France called Rivesaltes. This was a place where the French kept the Jews until they were sent to Drancy and then Aushwitz. From the camp they managed to send a letter to the police inspector in Nice asking for help and he sent a letter to the Director of the camp asking to liberate them since Zosia was 8 months pregnant. They were released and in 1943 went into hiding until the end of the war while the inspector hid their daughter over a year. Liliane and her sister remained in the convent for at least two years. Their parents, who also were in hiding, visited them once or twice. Following a visit of the Gestapo to the convent, in September 1944 they were moved to a different one.

After the war in 1947-48 Liliane studied to be a social worker in Brussels and spent few months in Sevenoaks, Kent (UK). She later immigrated to Israel where she met her husband Avraham. He had immigrated to Palestine from Sarny (Ukraine) on Noar Hahelutz before the war, as his father Yechezkel had been killed in a pogrom in 1919. He was a building contractor. They married in June
1956. Liliane ran an art gallery in Israel. Her sister Suzie also immigrated to Israel and later to London. Liliane died in 1984. She had three children, Ephraim (Ephi), Michal and Yechezkel (Hezi).