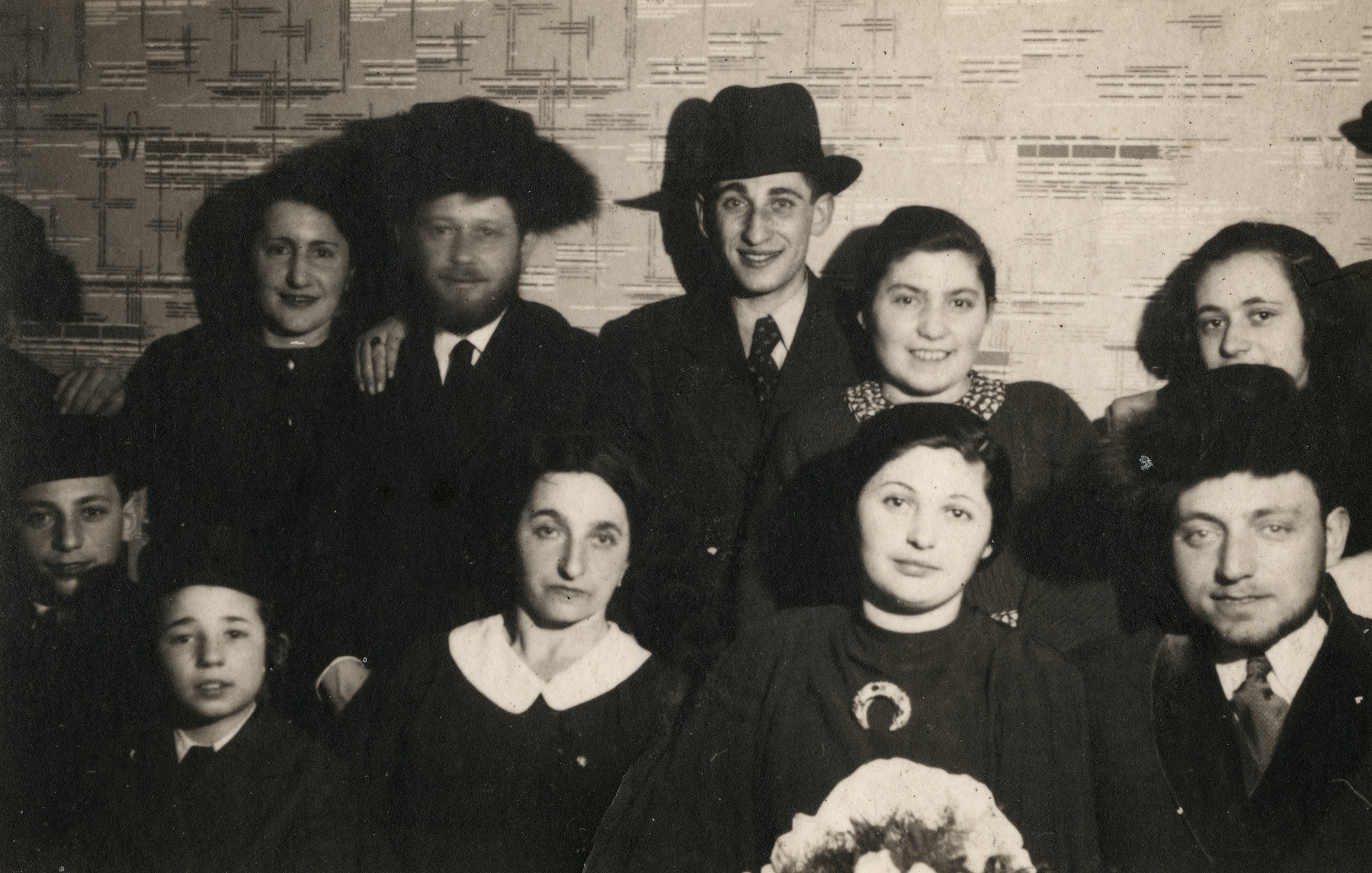 Pictured are Haim Widowsky (originally Rotenberg) at the bottom with his cousins, his father Yehuda Rotenberg (wearing fur hat, second from left on top), his mother Sara nee Widowsky with white collar.

Biography
Elissa Widowsky (originally Liba Braunfeld) was born on January 10, 1928 to Chaim Braumfeld (b. Nowi Sacz) and Nechama Schiffeldrin (b. Wishnitz). Chaim had three younger sisters Ritza, Devorah (married to Berish Landau), Mindel, and one brother Dov. Nechama had three sisters Miriam, Esther Rosenszweig, and Rachel Birenbaum. Elissa was born in 1928. She had five older siblings Leibish (Leon) Braunfeld (b. 1920), Moshe (b. July 15, 1922), Malka (b. 1924), Raitza (b. 1926) and Shlomo (b. 1927). She also had two younger brothers, Elimelech (Majlech, b. 1930) and Michael (b. 1932). All the children were born in Krakow where their father, Chaim Braumfeld owned a shoe store. The family was Hasidic and quite religious. In 1938, after Germany expelled Polish born Jews, Elissa and her friends collected clothing and her mother prepared food for them. In early 1940 after the Germans took over Krakow, some soldiers entered the synagogue where her father was praying and shaved off half of his beard. Soon after, Elissa's brother Moshe was arrested but luckily his father was able to secure his release. Since the family was so large they were not allowed to enter the ghetto when it was set up. Prior to the ghetto's establishment in March 1941, the family received permission to rejoin relatives in They asked permission to go to Nowi Sacz. However the Germans instead deported them to a work camp in Miedzyrzec Podlaski near Russia. The family was allowed to live outside the borders of the camp, but they still suffered from starvation. Before long, Elissa contracted typhus. She recovered only for her father to come down with the illness. He fell into a coma, awoke only long enough to bless his children and admonish them to remain Jewish, and then passed away. Two months later Elissa's mother also succumbed to typhus. Upon hearing that the children had been orphaned, Nechama's sister, Rachel Birenbaum wanted them to join her in Galicia and sent her daughter Bronka to fetch them. Bronka traveled with Elimelech and Michael. Moshe, Malka and Shlomo traveled together, and Elissa and Raitza traveled together. However food was scarce, and Elissa needed to eat a lot due to her bout with typhus. She therefore left for Krakow and smuggled herself into the ghetto. She lived with a cousin and supported herself working in a broom factory. She even dressed as a boy to find work shoveling snow. However once she needed official working papers, she realized that she could not remain there.

Soon after her siblings Shlomo and sister Raitza also came to Krakow. Elissa now worked smuggling goods into the ghetto from the outside. The following year, she went to Bochnia to look for family. After learning that all of mother's family had been sent to Treblinka or Belzec, she fled to her aunt and uncle Devora and Berish Landau in Brzesko. Her siblings Malka, Leibish, Moshe, Michael and Elimelech were also there. The Landaus welcomed them even though they had five of their own and now cared for 12 children all together. Elissa continued to travel from ghetto to ghetto bringing documents and information. Upon hearing that there would be a round-up in Krakow, she returned there to rescue her Raitza and Shlomo. Raitza refused to leave and was later deported to Belzec where she was killed. However, Shlomo agreed to join the family in Brzesko. The family continued to shuttle from ghetto to ghetto in reaction to rumors of impending ghettos eventually settling in Bochnia where Leibish also joined them. Berish's brother heard that there would soon be another round-up in Bochnia but also that there was a way to escape to Czechoslovakia. Prior to the liquidation of the ghetto, Elissa's aunt and uncle sent her out of the ghetto together with a young girl named Chana Zucker. The girls took a train to Tarnow and switched to another that brought them to the Slovak border where a guide met them. Several other Jews from Bochnia had also gathered there. The guide let them through the forest to the border where they were spotted by a border policeman and taken to jail. Before long, Elissa was released from prison into the care of a "non-Jew." The non-Jew turned out to be a Slovak Jew working for the resistance who helped bribe police to allow for Jews to escape. Before long the entire group was released, and they all made their way to Bratislava where Elissa reunited with her brothers Elimelech and Michael. In 1943 they left traveled to Kosice and then on Budapest, Hungary. In Budapest they first came to the home of the Schweitzers who were housing a lot of Polish refugees. They then moved to an orphanage before reuniting with their aunt and uncle Berish and Devorah Landau who had also escaped from Bochnia. By then, Germany had invaded Hungary, and Elissa again did not feel safe. She and her brothers next fled to Romania where they met up with their cousins Yaffa, Sara, Shimon and Tzipora Landau. Once in Romania they received certificates to travel to Palestine through the help of the Betar Zionist movement. Elissa, Elimelech and Michael sailed from Constanta to Turkey and then took a train to Palestine arriving on July 7, 1944. Elissa later married Haim Widowsky, a survivor of the Krakow ghetto, Plaszow, Gross Rosen and work camps in Germany.

Their older brothers Leibish and Moshe both survived labor camps. However, their sister Malka perished in Auschwitz and their brother Shlomo was killed in labor camp after delaying reporting for a selection in order to complete his morning prayers. Dvorah Landau and her children survived and immigrated to Palestine after the war. However, Berish Landau was captured and sent to concentration camp where he perished.