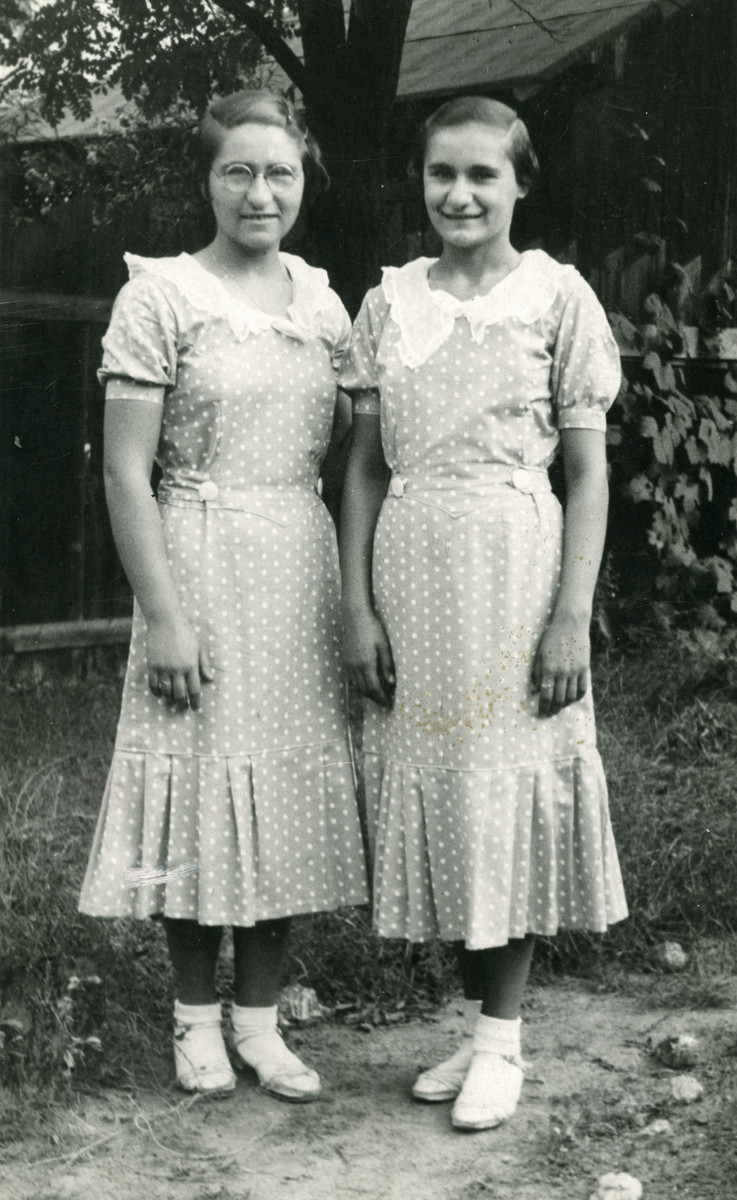 Biography
Sara Zecharia (born Koviliak) is the daughter of Avraham Bernat Koviliak (b. March 8, 1898 in Plonsk, Poland) and Eva (Hava) Weiss (b. December 9, 1919 in Lucenec). Sara was born on November 21, 1947 in Lucenec, Slovakia. Her father's family migrated from Poland to Slovakia at the turn of the century and settled in the village of Gacs, Slovakia near Lucenec. There, Heinrich (Avraham's father) worked as a cantor and kosher slaughterer for the town and surrounding area. The family was very religious. Avraham studied in a heder and later became an apprentice to a welder. He read and spoke Yiddish, as well as some Hebrew, Hungarian, and Slovak. Around 1930 Avraham his first wife Josephina (b. March 6, 1896) who ran a grocery store in Gacs. They had one son, Thomas (Tomika or Yishayahu in Hebrew) born 1930. They lived in Gacs with Avraham's two brothers, Isidore (Yitzhack, b. 1920) and Shandor (b. 1906). His sister, Helen (b. 1897) had left for the United States with her husband Morris Blotnik in 1930. Isidore was single and worked in a clothing store; he was also an artist. Shandor was married to Zelma Neuman and had three children; Tibor, Erwin and Lazlo. Zelma and the three children all perished in Auschwitz. Shandor worked with Avraham as a machinist in a textile firm. In the summers they worked in the fields in agriculture.

In 1938 Hungary annexed their region of Slovakia and began enacting antisemitic legislation. Jewish men were conscripted for forced labor. Starting in 1940 Avraham and Shandor were sent to a series of different labor camps performing different arduous tasks including working in a quarry. In September 1942, Avraham was sent to another labor camp to support an army battalion in Galicia. In 1944, he returned to Hungary but he did not return to his village. Instead he stayed with cousins in Budapest who were living with false Christian papers. After the war he returned to Lucenec and learned that the rest of his family, including his wife Josephina and 14 year old son Thomas, had been deported and gassed in Auschwitz in 1944. He consequently met his second wife, Eva Weiss, Josephina's niece.

Eva (Hava) Weiss was the only child of (Adolph) Avraham Weiss and Sara Berta Rotman, both of whom had been previously married. Sara was born in Pestina and was one of four siblings, three girls and one boy. She had been married to a cousin of Adolph's and was a widow and had one son, Ferro. She moved to Lucenec with her sister Josephina. Adolph had lived in Bratislava and was a widower and had three sons; Marcus, Shandor and Jeno. Berta and Adolph married in Lucenec where Adolph worked in a textile store. Eva was born on December 9, 1919. Adolph died a natural death in 1930. Ferro lived with and helped support the family. Later their cousin, Yolanda, moved in with them after her mother died. Eva finished high school and studied accounting. After the imposition of antisemitic restrictions in 1939, the family's income disappeared and they had to scratch together a living as best as they could. They made dolls from leather which they sold in the market.
During the war Ferro was conscripted to the Russian army and spent most of the war years in Russia. On March 19, 1944 Germany invaded Hungary. In April, the Jews were concentrated in ghettoes, and on June 10th, the remaining Jews of Lucenec, including Eva and her family, were sent to Auschwitz. Sara Berta, her sister, Josephina and nephew, Tomika perished there.
Eva survived Auschwitz and was sent on a death march. She and a friend stayed together and helped one another. When they got a chance the two women escaped from the march and rolled into the moat near the path. They remained there until everyone else had passed. They resumed walking but Eva was very weak and had typhus and could not continue. They came to a nearby German village and knocked on the door of a house finding an older woman and her daughter Elizabeth. The German women took in Eva and her friend and cared for them for several weeks until Eva recovered. (Although a photo exists of older woman, her name is unknown.)

Eva and her friend then set out for Prague traveling around 700 km. There they learned that most of Eva's immediate family was murdered. In Prague the Joint Distribution Committee refused to believe that Eva had been in Auschwitz because she never was tattooed. Eva left Prague and returned to Lucenec disguising herself to look older and less attractive, as there was a danger of rape by Russian soldiers. She couldn't return to her own home since a Christian family had moved in and was using her belongings. Instead she and some 80 other survivors stayed together in the courtyard of a church. There Eva met Avraham Bernat, who had lost his wife (Eva's maternal aunt Josephina) and son. Eva also reunited with her cousin Yolanda who had been hiding in Budapest and who helped care for her. Eva slowly regained her strength and health. She and Avraham Bernat Koviliak were married on June 9, 1946. Their daughter Sara was born the following year.

Avraham worked as a driver for the Jewish Agency helping Jews from Hungary reach Israel via Slovakia. Avraham, Eva and Sara decided also to try and leave Slovakia illegally, but they were caught and sent to a jail in Brno, Czechoslovakia. Since the baby Sara was crying a lot, the jailers released Eva and Sara. Later, Ferro paid a ransom for Avraham's release. They all returned to Lucenec and eventually immigrated to Israel legally. They arrived in Israel together with Shandor and his wife Elka on July 7, 1949 on the "Atzmaut." After a stay in Athlit, they went to the immigration camp of Pardes Katz where they lived for about five years. Avraham worked in a gas station until he learned Hebrew and later worked for Caterpillar until the age of 72. In the early 1950s, Jews from the Los Angeles community wanted to help refugees from Hungary and with their assistance Avraham and Eva bought an apartment in Kiryat Ono. Sara became a social worker and is married with 3 children and many grandchildren. Eva died in 1985 at the age of 65 and Avraham died in 1991 at the age of 93.