Jewish refugees wait on board the Pentcho, after it was shipwrecked on the island of Kamilonissi. 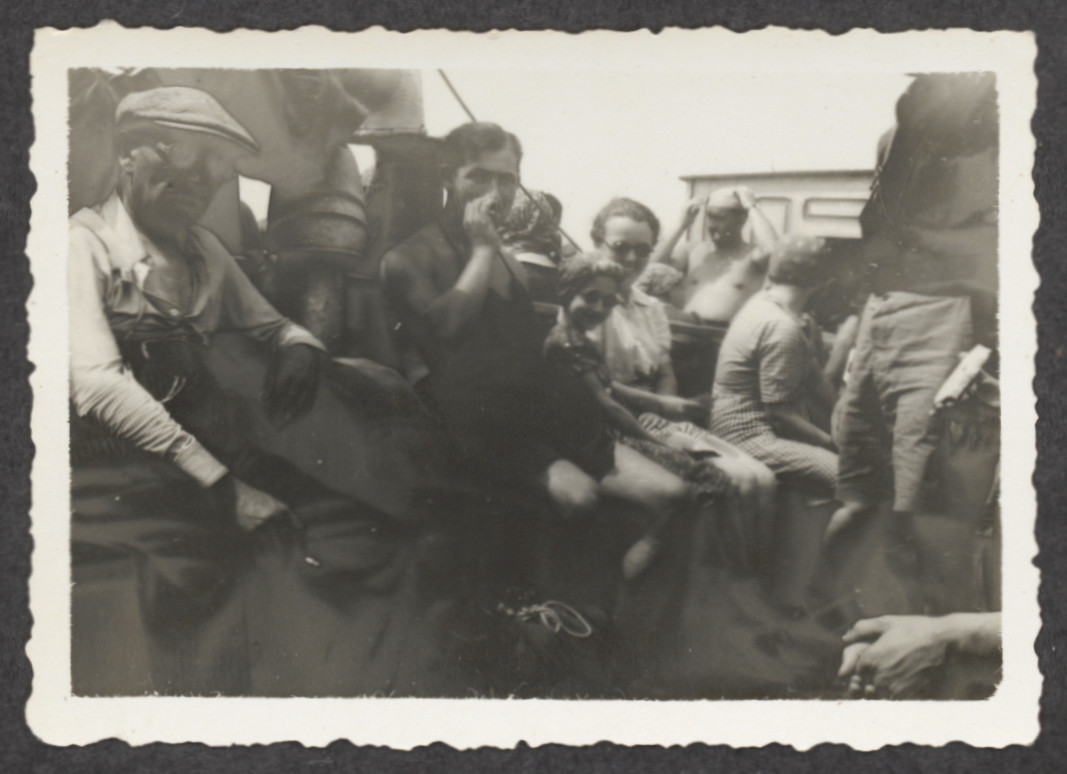 Jewish refugees wait on board the Pentcho, after it was shipwrecked on the island of Kamilonissi.

The (post period) inscription on the back of the photographs reads, "On the island."

https://encyclopedia.ushmm.org/content/en/article/jewish-aid-and-rescue.
Biography
Rudi (Rudolf) Fellner (the father of the donors) was the son of Eugen (Jeno) Fellner (1888-1942) and Stefanie Sohr Fellner (1887-1974). Eugen grew up on the streets of Vienna without much education. He later supplemented his income as an entertainer, singer and magician. Stefanie's father, Julius Sohr, owned a knitting and garment store. They manufactured various women's accessories. She was one of four daughters and all the sons-in-law, including Eugen, went into his business. Eugen and Stefanie married in 1912, and Rudi was born July 6, 1913. Rudi was an only child but grew up together with his cousin Fred Freiwirth. Fred's mother was one of Stefanie's sisters. In addition to elementary school Rudi also studied music and piano at the conservatory until age 13 when he began private lessons with the young composer, Erich Zeisl. As a teenager Rudi would stand at the back of the opera and follow along with the score. By age 16 he began opera coaching. His father wanted Rudi to study law, but he was uninterested and they compromised on pharmacy. It soon became clear that Rudi was unsuited to this profession, and he decided to pursue his passion, music. He attended the Hochschule fur Music and Darstellende Kunst and received a degree in conducting, but it was difficult for him to earn a living. He conducted a symphony the day before Hitler marched into Austria. The following day an agent called to ask if he was racially pure. Rudi replied that he was a racially pure Jew, and the agent hung up. Another day, five young Nazis stopped him on the street while he was enroute to give a private lesson. They made Rudi wash the floor with a toothbrush and threatened to send him to Dachau. Luckily, a former classmate came by and Rudi was released. He then decided that he had to leave Austria. He obtained a passport and on July 8, 1938 flew to Italy. He entered the country on a temporary visa valid for only a few months, but he ended up staying over a year. At first he supported himself as a domestic and then got a job correcting German translations of Italian operas. He received papers to Bolivia only to discover they were invalid. Eventually he received an affidavit to come to America from a distant cousin, Arthur Wise. He then moved to Genoa, supporting himself with various odd jobs while seeking passage to the States. By then WWII had started. On September 25, 1939 he received passage on Conte di Savoia and sailed out of Europe. He arrived in New York on September 23 1939.