Portrait of school boys in Chase Terrace near Birmingham. 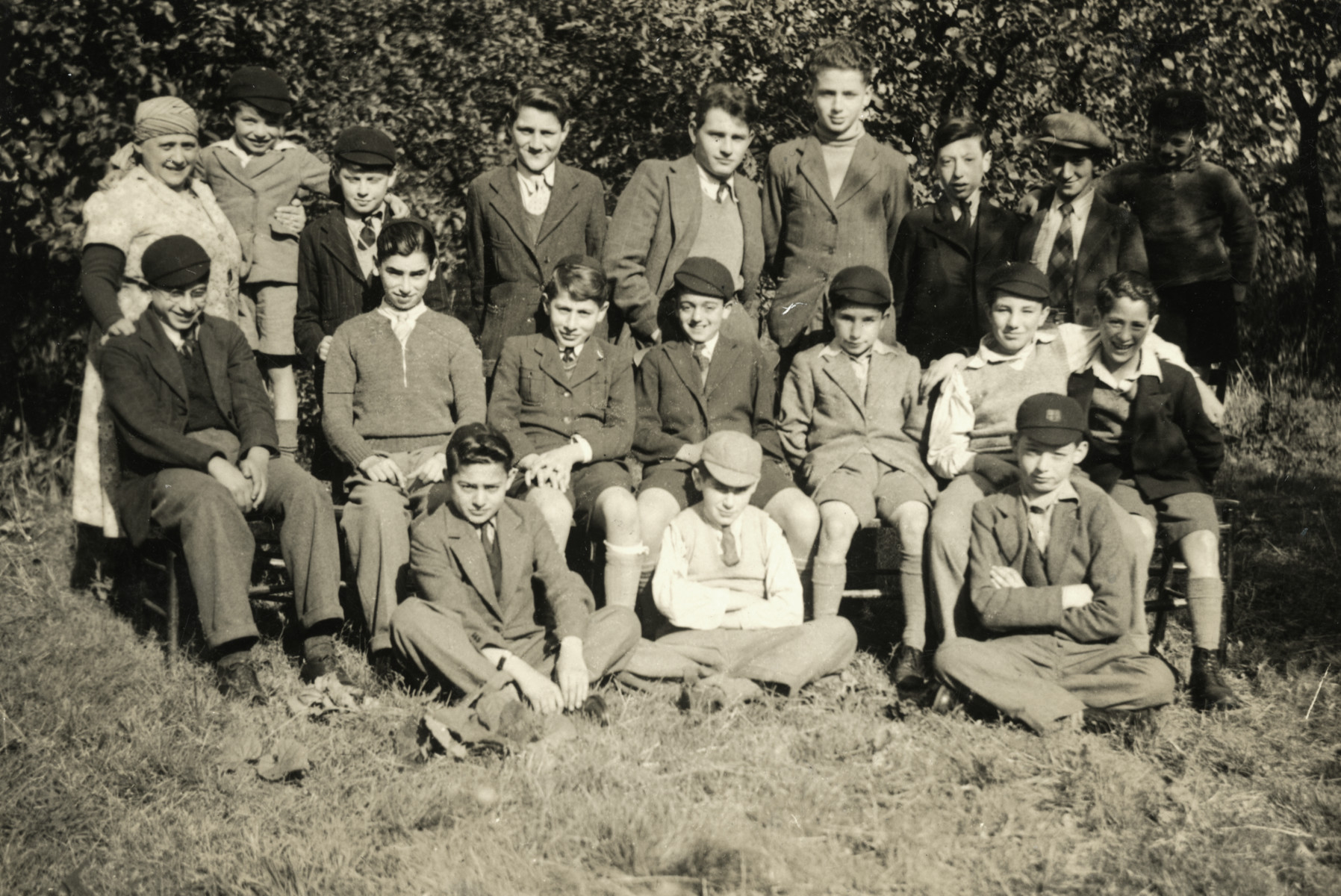 Portrait of school boys in Chase Terrace near Birmingham.

Gus Meyer who had come to England on a Kindertransport is in the top row, fourth from the left.

Biography
Gus (Yaakov) Meyer is the son of Albert (b. July 27, 1886, Bonn) and Karolina (b. August 1, 1891 in Neuwied) Meyer. He was born on October 9, 1928 in Bonn, Germany. His father was a cattle dealer and owned a farm in nearby Bulesheim. Gus had three older siblings: Theresa (b. 1914), Herbert (b. 1918 who perished with his wife in Auschwitz), and Erika (b. February 11, 1921) Theresa together with her husband left Germany for England where she got a position as a nurse. Erika also went to England as a maid. The family was not particularly religious but kept a kosher home. Yaakov's sisters went to public school. In 1934 Yaakov's father was killed by Nazi thugs who rode past him on a bicycle. After his murder the family became impoverished. Yaakov's bachelor uncle Gustave Meyer helped them out financially. He could have left Germany for England but did not want to leave Karolina by herself. In March 1939 Yaakov left on the Kindertransport. His mother took him to the train station; he never saw her again. He went by train from Bonn to Le Havre where he crossed the English Channel by boat. He had two first cousins whom he met in Margate and who were probably on the same train as he. Yaakov attended school in Margate (near Dover) where 64 boys were housed. He was one of the youngest and remained there for a year. Due to the bombing in the area the boys were divided up and sent to Christian homes. Yaakov went to Chase Terrace, a village near Birmingham to attend high school and live with the Holt family. There he received a final letter from his mother in March 1942 from the Red Cross. They had one son, but treated Yaakov as their second one even providing him with music lessons. Two years later Rabbi Mechle Rabinowicz opened a hostel in Aldridge for boys and fourteen of the original 64 from Margate moved there. Gus remained there until 1943 and attended a technical college. Circumstances changed and the boys had to go before a committee to request any of their needs, such as shoes or clothes and Yaakov did not feel comfortable asking for help. He left for London and worked in a butcher shop where he worked. In May 1946 he left for America on the ship Manhattan, arriving in Norfolk, Virginia, most likely sponsored by his uncle, Max Kaufman. He worked as a shipping clerk and then a salesmen in an upholstery supplies firm. He studied business administration at night and later attended City College. His sister Theresa also emigrated to the U.S. after the war as a nurse. In June, 1952 he married Jeannette Klugmann, another refugee from Germany.

Jeannette Meyer (born Klingman) is the daughter of Moritz (b. 1887) and Bertha Eisemann (b. Frankfurt, 1897). She was born on November 3, 1931 in Nuremberg, Germany where her father produced bristles for brushes. Jeannette had four siblings: Julius, (b. Nov. 1, 1921), David, (b. Sept, 1923 or 24), Karl, (b. 1926), and Hannah (b. 1927). During Kristallnacht their apartment was completely destroyed. Immediately thereafter the five children were sent to Paris to live with their Aunt Sophie and Uncle Nathan Wertheimer (he perished). Aunt Sophie arranged for the children to be placed in various homes. Jeannette went to live with Jacques and Ruth Weil who were distant cousins and remained for most of a year. She had gone to school for two months in Germany and later on in Paris was taught to read by the Weil's governess. In 1939 her parents came to Paris but did not have permission to remain there long and continued on to England. Jeannette and her siblings remained in Paris. Her sister was sent to Brussels to live with an aunt and soon joined her parents in England. Mrs. Weil was of Swiss origin and when they went for summer vacation to Switzerland, Jeannette was left behind. She stayed with the Goldschmidt family who had one daughter Felice. (Unfortunately, the family later perished.) From their home she was then sent to the Eubonne children's home. Jeannette was the youngest of some 70 children, including her brother Karl who had his Bar Mitzvah while in the home. Jeannette remained there until 1940 when their mother's bachelor brother, Gustave Eiseman who worked for Continental Grain obtained visas for the entire family to immigrate to the United States. Jeannette arrived to the U.S. with her brothers and a sister on the Champlain arriving in New York in May 1940. Her parents and other sister arrived the following day. The family settled in New York. Her father and his brother who had come to the U.S. two years earlier opened a business for trading in bristles. Jeannette attended high school and briefly attended college. She married Gustave Meyer on June 8, 1952. They have three children and twenty five grandchildren and numerous great grandchildren. They immigrated to Israel in 1970.