Franka poses on a street in Warsaw while hiding on the Aryan side. 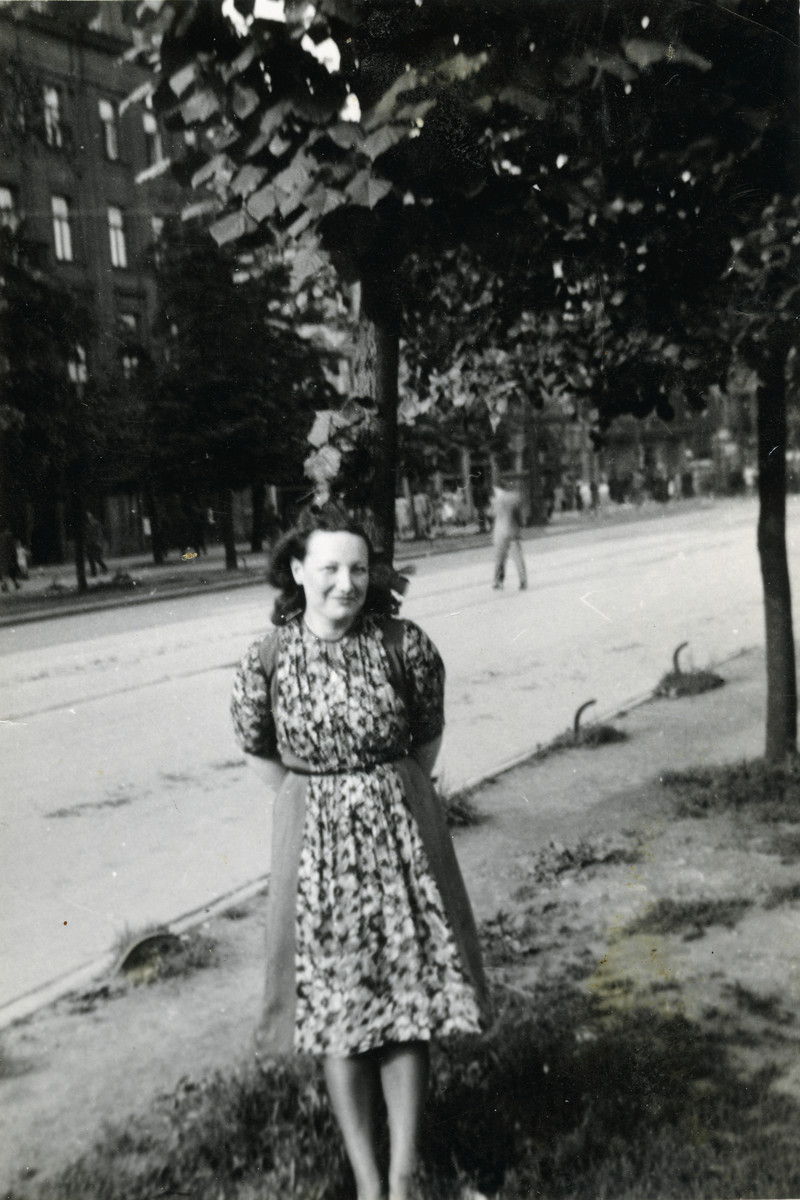 Franka poses on a street in Warsaw while hiding on the Aryan side.

Biography
Elana (Helena; Hela) was born in Bergen Belsen displaced persons camp on January 17, 1947. Her mother Franciska (Franka) Krotenberg Lewinska was born in Warsaw on May 3, 1918 to Sara Krotenberg and Moshe Syten. She had two siblings, a brother Shlamek (b. 1920) and a sister Tonya (b. 1925). Franciska's siblings and parents all perished with their parents in Treblinka after having been sent to the Warsaw ghetto. Franciska married Henryk Jesion in 1939. They fled to the Ukraine but eventually returned to Warsaw where they became imprisoned in the ghetto. Somehow they managed to escape from the ghetto and live on the Aryan side where they survived till the end of the war. Franciscka, hearing that there were lists of survivors posted in Germany, wanted to go to Belsen to look for any surviving family members. Her husband refused to leave Warsaw, and she left on her own. Franciska arrived in Bergen Belsen in May 1947 with two children, Elana's older sister Danuka (b. July 1. 1945 in Helmstead, Germany) and Helena. She registered herself as single and listed Marian Lewinski as the father of her daughters. In Belsen, Franka remarried Joseph Bursztajn who was a survivor of seven camps and had lost his first wife and son.

Franka sent one-year old Elana to Israel with Youth Aliya on board the Transylvania. Elana arrived in Haifa on February 24, 1948 where she was met by her adoptive parents Hulda (b. August 23, 1911, Rava Ruska, Poland) and Eliezer Rosenfeld (b. February 12, 1906, Turka, Poland). They provided a loving home for her on the kibbutz where they lived. Meanwhile, Franka, Joseph and Danuka immigrated to Israel in 1949 and settled in Haifa. Franka gave birth to a son Michael in November 1950. She had tried to find her younger daughter but was told that the boat she came on had sunk and the passengers had drowned. Also, the Rosenfelds upon learning that Franka was in Israel, rushed to legally adopt her thereby preventing her mother from obtaining any information as to her whereabouts.
In 1978 Elana obtained a copy of her birth certificate from the City Hall in Celle, the town next to Bergen Belsen. She sent a copy of it to the radio program "Mador H'pus Krovim" in Israel (Searching for relatives) as well as to the Joint and started to publicize her story in the media with no success. Eventually a journalist and his wife (Elana's cousin from her adoptive mother's side) came across Franka's maiden name Syten and found a cousin's wife and daughter living in Jaffa where Franka had stayed when she immigrated to Israel. Another cousin living in Ashdod heard the story and told her children in Montreal to let Franka know that her lost child was found.
Shortly afterwards, Elana spoke to her mother and spent five weeks visiting her in Montreal. She also met her sister for the first time in New York. In 1980 Franka came to Israel to visit where she was diagnosed with colon cancer. Elana had been living on Kibbutz Merchavia with her husband and had four children but she decided to move to Montreal for a year to be with her mother. She and her husband now split their time between Israel and Canada. Elana continued to gather pieces to her personal history and shared her exploration in an MA thesis entitled "Longing to Belong" which revealed her relationship with her two mothers.