Josef and Yetti Kollenberg (right) stand outside a house next to Yetti's sister, Dora. 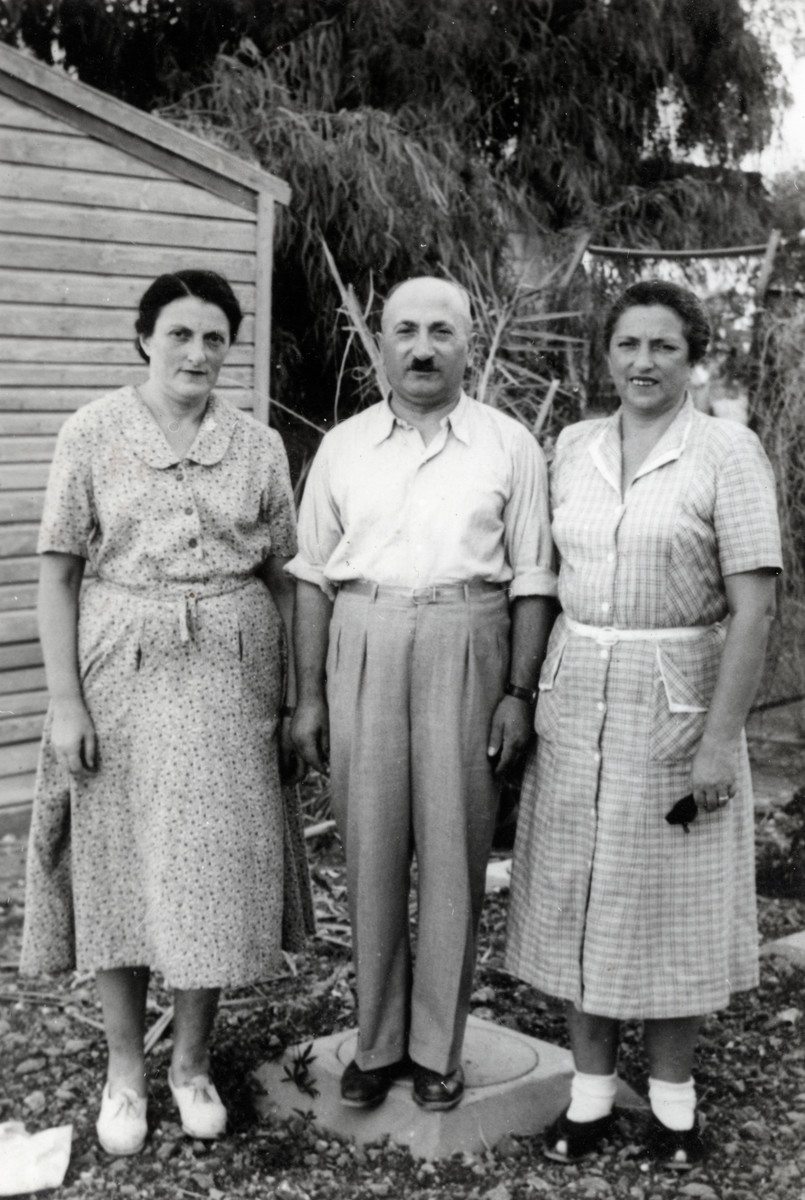 Josef and Yetti Kollenberg (right) stand outside a house next to Yetti's sister, Dora.

Biography
Thea Friedman (born Kollenberg) is the daughter of Yetti (b. 1903, Cernauti) and Josef (b. 1901, Cernauti) Kollenberg. Thea was born on July 24, 1929 in Cernauti (Czernowitz) Bukovina where her father owned a store. In 1912 Thea's paternal grandmother, Devorah moved to Canada leaving her three children with her parents until she could bring them over. In 1914 she sent the necessary papers to her children, but the outbreak of World War I prevented them from leaving. In 1918 Devorah again sent papers again to her children, but by that time Cernauti was under Rumanian rule and they could not leave until 1921. By then Josef (Thea's father) had married and did not want to leave.
In June 1940 Bukovina came under the Russian occupation and within six weeks the city was stripped bare. Shops were closed and much of the population was deported to Siberia. The Kollenbergs did not sleep in their house so as to avoid deportation. In July 1941 Romanian and German troops recaptured Bukovina. They immediately went house to house searching for men and terrorizing the Jewish community. Some 3000 Jews were killed. That fall the government established a ghetto in Cernauti and began deportations to Transnistria. Thea and her family were deported to Transnistria but after learning of the horrific conditions there escaped to the nearby ghetto of Mogilev-Podolsk. Only people working in specific jobs were given permission to remain in the ghetto. Thea found work in a pharmacy but as this job did not grant her a residence permit she found work for the Jundenrat. Her father worked building a bridge over the Dniester River and was allowed to return home just once a week.
In 1943 Thea met a school acquaintance who helped her escape from the ghetto and return to Cernauti. She left the Mogilev ghetto on December 31, 1943 and stayed with various friends in Cernauti. One day she learned that someone from Mogilev had betrayed her and that a detective was looking for her. She left her current location and went to stay with her childhood friend Sarah Gronich. She remained at the Gronich home for about six weeks before being arrested at 3:00 am on charges of being a Soviet spy. She was supposed to be sent back to Transnistria but the advancing Russian front prevented her deportation. She returned to the Gronich home on condition that she report weekly to the police. There she met her future husband Yosef Friedman. On September 1, 1944 she traveled to Bucharest under the assumed name Nikolina Niculescu. However, she again was arrested as political prisoner and only released with entry of Soviet forces on July 28th 1944. After the war, Thea reunited with her parents in 1946 and attended medical school in Bucharest. She and Josef wed on May 13, 1950.