Jews are gathered at an assembly point in the Kovno ghetto during a deportation action to Estonia. 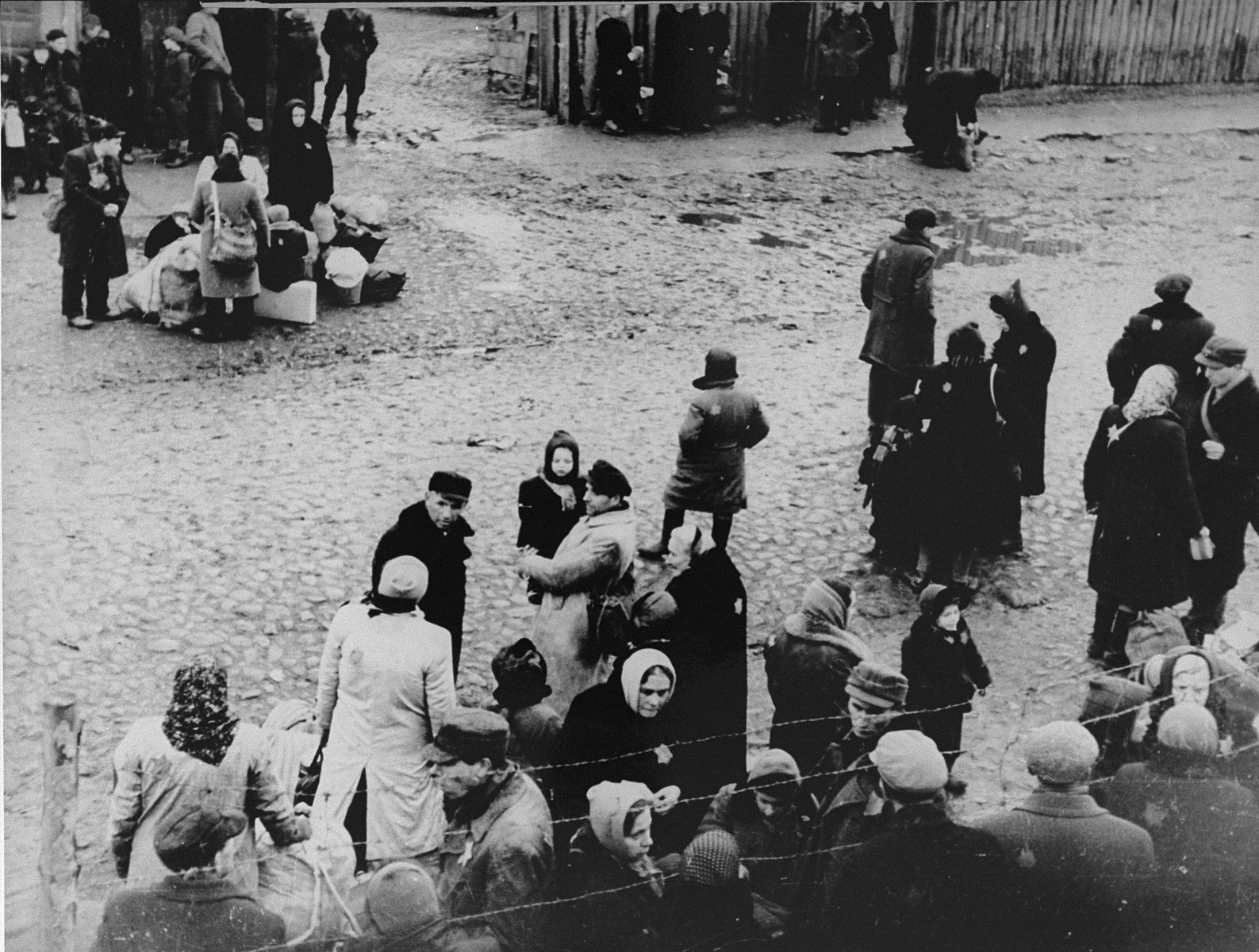 Jews are gathered at an assembly point in the Kovno ghetto during a deportation action to Estonia.

Event History
On September 15, 1943, by order of Reichsführer Heinrich Himmler, all ghettos in the Baltic states officially were converted into concentration camps. The Kovno ghetto became the Kauen concentration camp under the direct control of the SS Captain Wilhelm Goecke. The ghetto's population, which had remained relatively constant since the Great Action two years before, underwent significant changes. First, Goecke transferred approximately 3,500 residents to satellite work camps outside the ghetto where they had to live in barracks rather than in family units. In late October, Goecke demanded that the Altestenrat prepare a list of 3,500 individuals to be relocated in a nearby satellite camp thirty kilometers from Kovno. He asked that the list include families as well as doctors and nurses so that conditions in the new camp would not be that dissimilar from the ghetto. However on October 25, after the Altestenrat submitted a list of names, rumors reached the ghetto that sealed railroad cars were spotted at the station. Herman, a sympathetic German in charge of the ghetto's labor office, warned the Altestenrat that the Gestapo had ordered large numbers of trucks for the following day. On October 26, SS units and Ukrainian auxiliaries entered the ghetto and demanded that the Jewish ghetto police begin rounding up people. Eventually the German and Ukrainian forces took over the round-up forcefully grabbing people and discarding their possessions. Many went into hiding in underground bunkers known as "malines", but others, assuming they were going to a nearby work-camp, left obligingly. In all, 2,709 Jews were removed from the ghetto. They were taken to the railroad depot where they underwent a selection. Children and elderly were shipped to Auschwitz; all others were sent to Klooga in northern Estonia. Almost no one survived the deportation.
The Kovno ghetto Jewish police force was created on order of the German occupation authorities in July 1941, even before the ghetto was sealed. The policemen, who were initially recruited from the ranks of Jewish veterans and sportsmen, were issued separate armbands to set them apart from the rest of the ghetto population. Their primary function was to maintain order and discipline in the ghetto and to enforce the orders of the Jewish Council. The police worked closely with every Council office, particularly the labor department. With time, the police assumed additional responsibilities. Following the outlawing of a separate ghetto judiciary in August 1942, the police assumed responsibility for the ghetto's courts, which handled both civil and criminal disputes. It also became the role of the ghetto police to produce fellow Jews for forced labor brigades, maintain the two ghetto jails, and enforce German orders, including the round-up of Jews for deportation. Some ghetto residents held the police responsible for the policies it had to enforce and accused it of cooperating with the Germans. Yet, most of the police maintained high moral standards and gradually gained the respect of the population. On November 11, 1942, every member of the police force signed an oath pledging to act for the welfare of the Jewish community. In fact, several members of the police, including its commander Moshe Levin and his deputies Yehuda Zupovitz and Ika Grinberg, were active in the underground resistance movement. The Kovno ghetto Jewish police force was brought to an abrupt end during the infamous police action of March 27, 1944. German SS officers, seeking information about the ghetto's underground and hiding places, ordered the 140 members of the Jewish police to assemble. They were immediately arrested and taken to the Ninth Fort, where 36 of them, including Levin, Zupovitz and Grinberg, were executed. Others were tortured and then released. A few policemen, including Tanchum Arnshtam, revealed information about ghetto hideouts, and they became the nucleus of a new police force that worked directly with the Germans.
See https://www.ushmm.org/wlc/en/article.php?ModuleId=10005174.
See Also "Kauen Main Camp" in Encyclopedia of Camps and Ghettos Volume 1 Part A.
See "Kauen" in Encyclopedia of Camps and Ghettos, Volume 1 Part A
See Also https://encyclopedia.ushmm.org/content/en/article/kovno.