Goldschmied and Sharp family members relax on the peak of Mount Sunapee in New Hampshire. 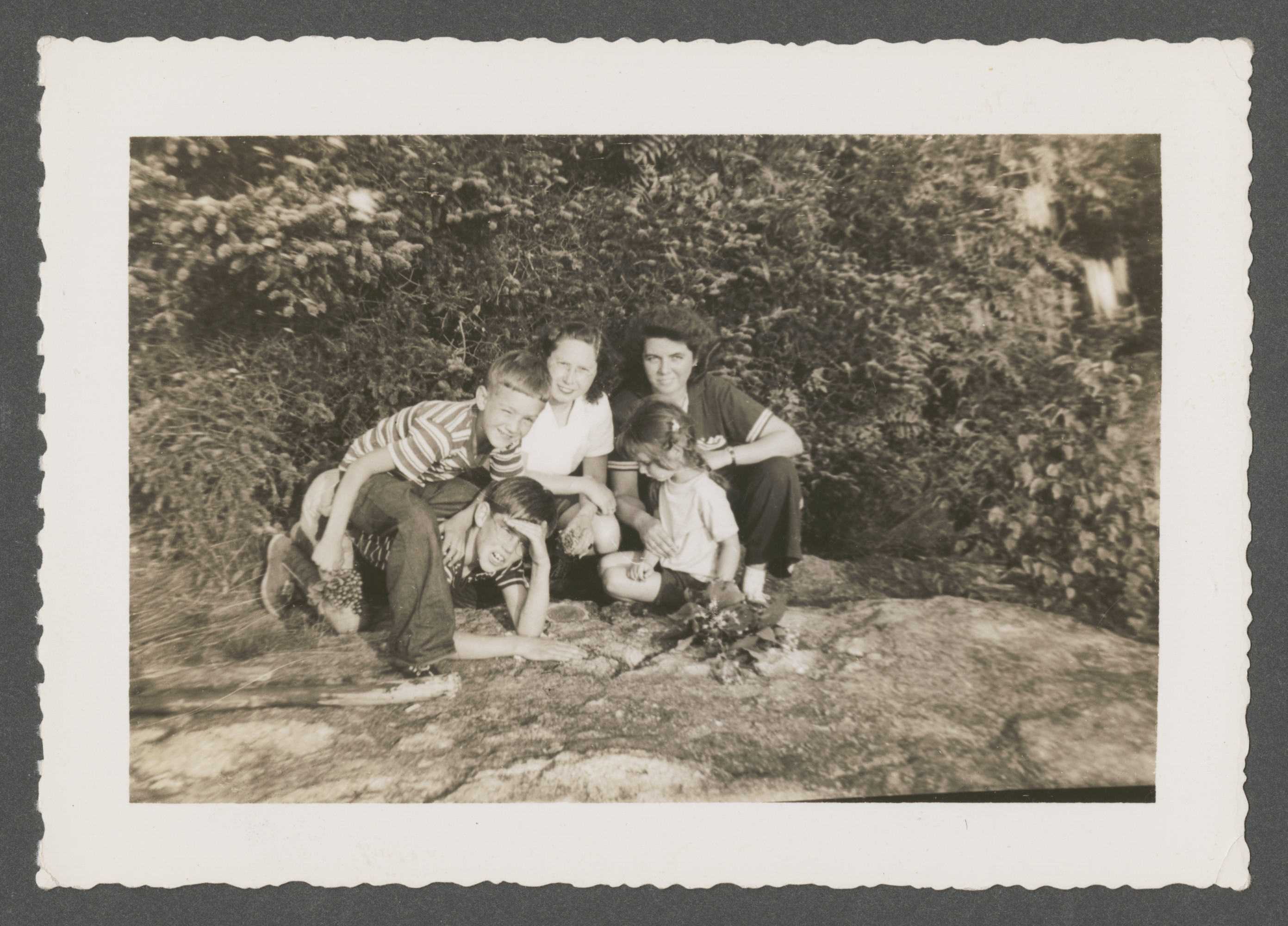 Goldschmied and Sharp family members relax on the peak of Mount Sunapee in New Hampshire.

Pictured is Renee Goldschmied (back, center), with Martha Sharp (back, right) and [probably] her children Hastings (front, on hands and knees) and Martha Content (front, right).

Martha Sharp was born on April 25, 1905, to British immigrants to America, James Edward Ingham and Elizabeth Alice Whelan. In her youth, Martha and her family worshipped at the First Baptist Church in Providence, Rhode Island. Martha attended Pembroke College, the woman's affiliate of Brown University. Upon completion, Martha studied Social Work at Northwestern University's Recreation Training School which centered in Hull House in Chicago. After completing her training, Martha became Director of Girl's Work and served as a social worker aiding over 500 girls.

Waitstill Sharp was born on May 1, 1902 to Dallas Sharp and Grace Hastings. Waitstill graduated from Boston University with degrees in history and economics; he went on to attend Harvard Law School. Immediately thereafter, Waitstill served as Secretary of the Department of Religious Education at the American Unitarian Association (AUA). In 1928, Martha and Waitstill married, immediately thereafter Waitstill enrolled in a masters program at Harvard Divinity School. Waitstill was ordained a minister in 1933 and assigned to a church in Meadville, Pennsylvania. Martha assisted him by organizing youth work along with educational and women's gatherings. In February, 1939, the AUA chose the Sharps to aid emigration and relief in Czechoslovakia, focusing on the safety of intellectuals and anti-Nazi political leaders. On March 23, 1939, Martha escorted thirty-five refugees including journalists, political leaders, and two children whose parents had committed suicide, to England. The remainder of the Sharp's work in Czechoslovakia was assisting emigration by: registering people, counseling them about U.S. emigration laws and quotas, attempting to get people with quota numbers released from prison, facilitating communication between Czechoslovakian and American government officials, arranging transportation to safer countries, aiding expenses, and securing a few scholarships for Czech students in the United States. The Sharps accomplished this by traveling separately and taking their curriculum vitae to contacts in London, Paris, and Geneva; these cities often provided job offers and sponsors, and initiated emigration procedures.

The Sharp's left Europe on August 30, 1939. Upon their return to America, they helped launch the Unitarian Service Committee (USC) dedicated to investigating opportunities in both America and abroad for humanitarian service. By request of the USC, the Sharps returned to Europe on June 20, 1940. They spent their first few weeks in Lisbon, Portugal arranging for a shipment of condensed milk from the Nestle Company to Marseille, France. Once the Sharps arrived in Marseilles, they established a center of operations to transport relief supplies to the Pau region of France. Waitstill returned to Lisbon to as the representative of the Emergency Rescue Committee (ERC). During his time there, Waitstill aided the rescue of individuals such as: Nobel Prize winning biochemist Otto Myerhoff, writers Lion Feuchtwanger, Franz Werfel, Heinrich Mann, and their various family members.

Martha remained in Marseilles, France, to finish the child emigration project with Helen Lowrie, another USC volunteer. This project became a collaborative effort between the USC and the United States Committee for the Care of European Children. From September 15, 1940 to November 25, 1940, Martha and Helen obtained exit visas, permits, and various other documents necessary to arrange for the emigration of twenty-seven children and ten adults. In 1944, Martha became acting director of the Lisbon office and remained there until 1945. By May 1945, Martha facilitated the emigration of twenty Spanish Republicans to Venezuala and seventy-five to Mexico. Martha and Waitstill Sharp were named Righteous Gentiles by Yad Vashem in 2006.