A group of friends meets for a cup of coffee in the Westerbork transit camp. 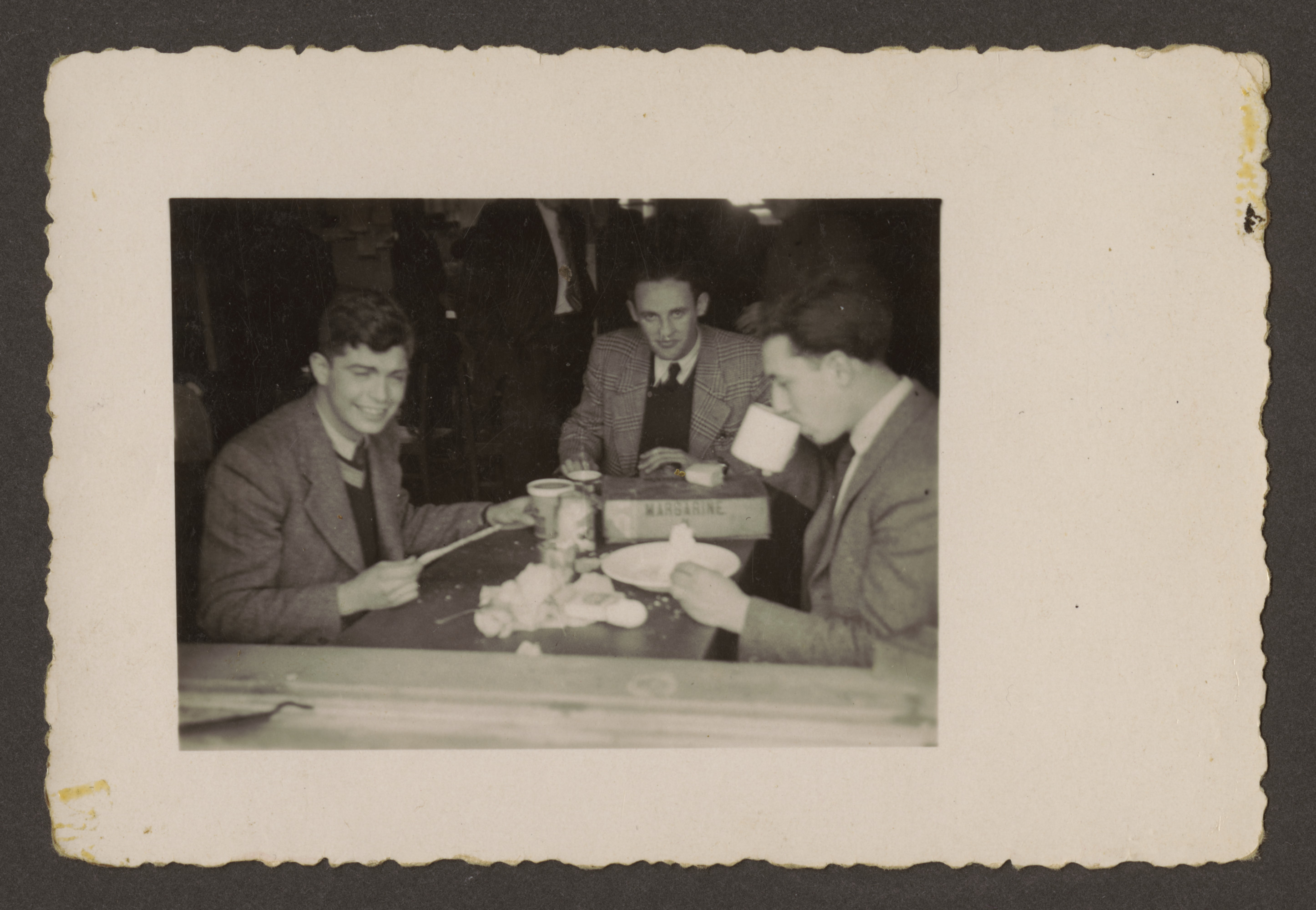 A group of friends meets for a cup of coffee in the Westerbork transit camp.

Among those pictured are Erich Rosendahl (far right) and Werner Lederman (far left).

In Gangelt, Helmut attended grade school and recalls experiencing antisemitism there, particularly during the season of Passover and Easter. After the Nazi party came into power in 1933, however, he was not able to continue his schooling due to the growing restrictions placed on Jews, so he learned the trades of drawing and machinery, and later painting. In June 1938 Helmut moved to Amsterdam to be with his sister Hilda. In November of the same year, after Kristallnacht, he was joined by his parents and Erich. On July 6, 1939 Julia died.

On May 10, 1940 Germany invaded the Netherlands. Helmut and his family members began seeking safer places to live, first moving to Hellevoetsluis, a small city on the western coast, then to Hilversum, located southeast of Amsterdam. When the Germans began forcing Jews out of Hilversum, Helmut returned to Amsterdam. There, he was able to find work as a painter in a home for elderly Jews, and stayed with his sister at nights. He received a document from the Judenraat stating that he could not be deported due to his work, but his brother Erich was arrested and deported to Westerbork.

On September 2, 1942 Helmut was arrested and sent to Westerbork as well. While there he worked moving coal to the steam plant. He and Erich remained there two years, but in September 1944 they were sent to Theresienstadt. Conditions there were poor, with little food or medication. After four weeks, they were sent to Auschwitz, where Helmut was tattooed with the number B11717. He was soon transferred to the subcamp of Gleiwitz, where his job was to paint information on the on the railway boxcars. Work days were long and the SS guards were brutal, often killing prisoners or forcing them to complete senseless tasks such as carrying heavy stones from one corner of the camp to another, and back. He and Erich were no longer together, as Erich had answered the call to work as a machinist. He was sent to Ebensee, where he worked digging stones to build an underground factory for I.G. Farbin. He died at Ebensee on February 22, 1945.

As the end of the war drew near and the Russians were advancing west, the Germans began evacuating camps ahead of them. Helmut and other prisoners were marched to Blechammer. The following morning they were marched out again, but Helmut was late to rollcall and left behind. This saved his life, as the entire transport was killed.

When the Russians arrived and liberated Blechhammer, Helmut was down to 75 pounds. He and other remaining prisoners were loaded onto a train and taken to Krakow and Katowice, Poland. He later traveled to Cernauti, Romania, where he was cared for by the Russians and slowly recovered. From Cernauti, he traveled by train from Turnovv, Lvov, Warsaw, Frankfort on the Odor, Berlin, Hanover, and finally back to Amsterdam. His father, Max, had survived the war, but his sisters Meta and Hilda had not. Meta was killed in Auschwitz on September 3, 1942, and Hilda died on November 30, 1942-43 in the vicinity of Auschwitz.

In 1946 Helmut married Berta Eszter Basch (b. June 20, 1918 in Kose Papsa, Hungary). She had survived the Holocaust in hiding with the help of rescuer Nell Keitel, who was the inspector for Protestant schools in the province of Utrecht, and who was later recognized as Righteous Among the Nations by Yad Vashem. Helmut and Berta immigrated to the United States, arriving in New York on April 26, 1949, and settling in California. Max Rosendahl died April 29, 1950 in Amsterdam.