Eva Isboutsky walking down the street, covering the Star of David badge that she has been forced to wear. 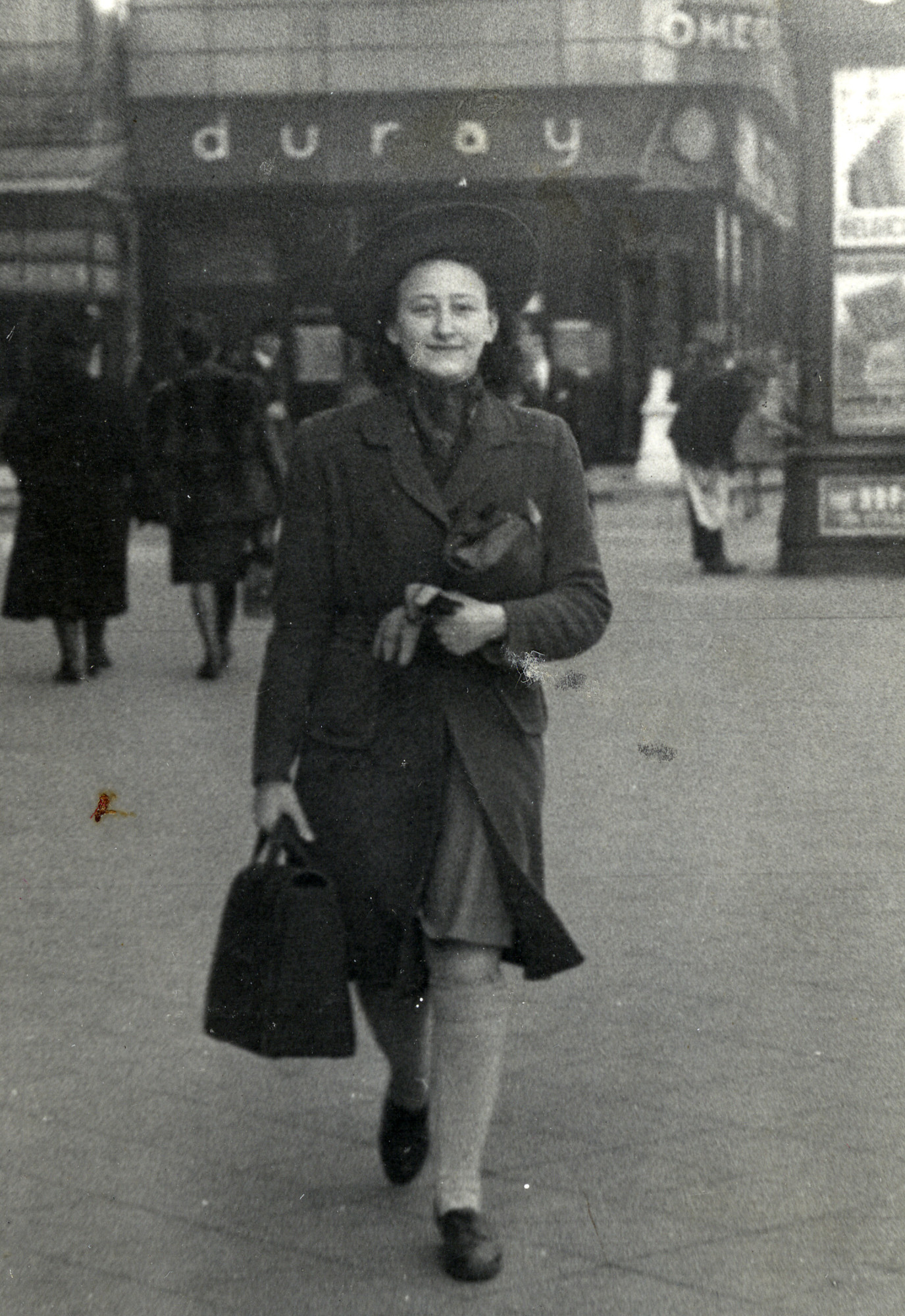 Eva Isboutsky walking down the street, covering the Star of David badge that she has been forced to wear.

In 1938, David enlisted in the Belgian army, with the intention of learning to handle a gun, to be able to fight for the Jewish homeland. Two months before he was scheduled to finish his service, WWII broke out and he was sent to the front to fight the Germans. Anticipating Germany’s invasion of Belgium, in the spring of 1940 the Isboutsky family left Antwerp for La Panne, a coastal town near the French border. At some point, the family was expecting heavy bombing in their area. Naomi’s father stayed in their apartment while Naomi, her mother, a brother, and her two sisters took shelter in a church, reciting prayers as the bombs fell. Although the church was hit, the area where they sheltered remained intact.

By 1942 the Isboutsky family members were separated from one another. Josef was released from the army, one of only seven soldiers in a seventy-soldier unit to have survived. The family hired a smuggler to take him to the French border, but he was not able to cross and forced to return home. His second attempt was successful, and the family learned later that he had managed to make his way to Cuba. Josef, who had been born in England, was interned as a prisoner of war in Kreuzberg. The rest of the family received deportation notices. Since Rachelle and Eva had obtained Belgian citizenship, they appealed to the Judenrat, thinking their orders were a mistake. They were still sent to the transit camp of Malines, but they were assured that they would not be deported. Naomi and her parents went into hiding with a cousin, Dora Lipshitz, who was a Belgian citizen and lived in the center of the city with her two young sons.

In spite of the separations, the family members managed to communicate. Josef earned a little money doing laundry for his fellow prisoners of war and sent this to his family in Belgium, as well as writing letters to his brothers David and Abram, who were in Cuba and in England. Naomi and her parents were able to send packages to Rachelle and Eva in Malines.

In the summer of 1942, while Naomi and her parents were in hiding, they got word of a raid by the Germans the on the next street over. They rushed to hide in the attic, where they remained until their cousin told them it was safe to come out. She warned them that the Germans would return that night, so they tried to relocate to their grandfather’s house a few blocks away. When that did not work out, they went back once again to their cousin. The Germans did not return for six months, but in January 1943 they arrived with Belgian collaborators during the family’s early morning prayers. They ripped off her father’s Tefillin and threw his prayer book to the floor, then struck him in the face and pushed the family onto the waiting truck.

At Malines, Naomi and her parents were reunited with Rachelle and Eva, who were able to help them find work. Naomi’s mother did sewing, her father worked folding cartons and pasting envelopes, and Naomi assisted him in filling his quota.

In June 1943, Queen Elizabeth of Belgium decreed that individuals holding Belgian citizenship be released from Malines, and Naomi’s family left together in spite of the fact that her parents were still Polish citizens. They went to Brussels, where Rachelle and Eva were able to find work as maids for Jewish families. Several months later, the Gestapo took all five family members to the Gestapo headquarters, where they were held in a crowded prison cell while awaiting a decision on their fate. Naomi was first sent for a week to the children’s home Orphelinat Israelite de Bruxelles, run by Jonas Tiefenbrunner. There was not enough space, so she was transferred to the orphanage Aische en Refaill, located in a small castle in Perwez. Rachelle was sent to Wezeenbeek and Eva to Linkenbeek to work as counsellors.

Naomi remained in this orphanage with 150 other children for a year, where she was responsible for such tasks as working in the kitchen and being a nurse’s helper. Ten days before the war ended the director of the home, Mr. Horowitz, was informed that the Germans were coming to deport the children to Auschwitz, so he dispersed them among the homes of farmers in the surrounding area. Naomi spent about a week with a family, until the war ended.

Naomi’s entire family survived the war and was reunited. Her brother David, who had escaped to Cuba, enlisted in the Brigade in Piron (part of the English army). He was part of the force that invaded Normandy, and helped liberate Brussels. Abram returned to Belgium from England. Josef was freed from the internment camp in Germany, and returned to Belgium as well. Naomi and her parents initially rented an apartment in the Anderlecht quarter in Brussels, and then her parents moved to Antwerp. After attending commercial school for two years, Naomi joined her parents in Antwerp and secured an office job. Eva and Rachelle both married, and moved to the United States and Israel. After her mother’s death in 1951, Naomi immigrated to the United States to join Eva. There, she met her future husband, Rubin Waldman. They married in 1955 and went on to have four children and seventeen grandchildren. In 2012, she immigrated to Israel.