Group portrait of Polish Jewish intellectual and cultural leaders standing amidst the ruins (possibly in the Warsaw ghetto). 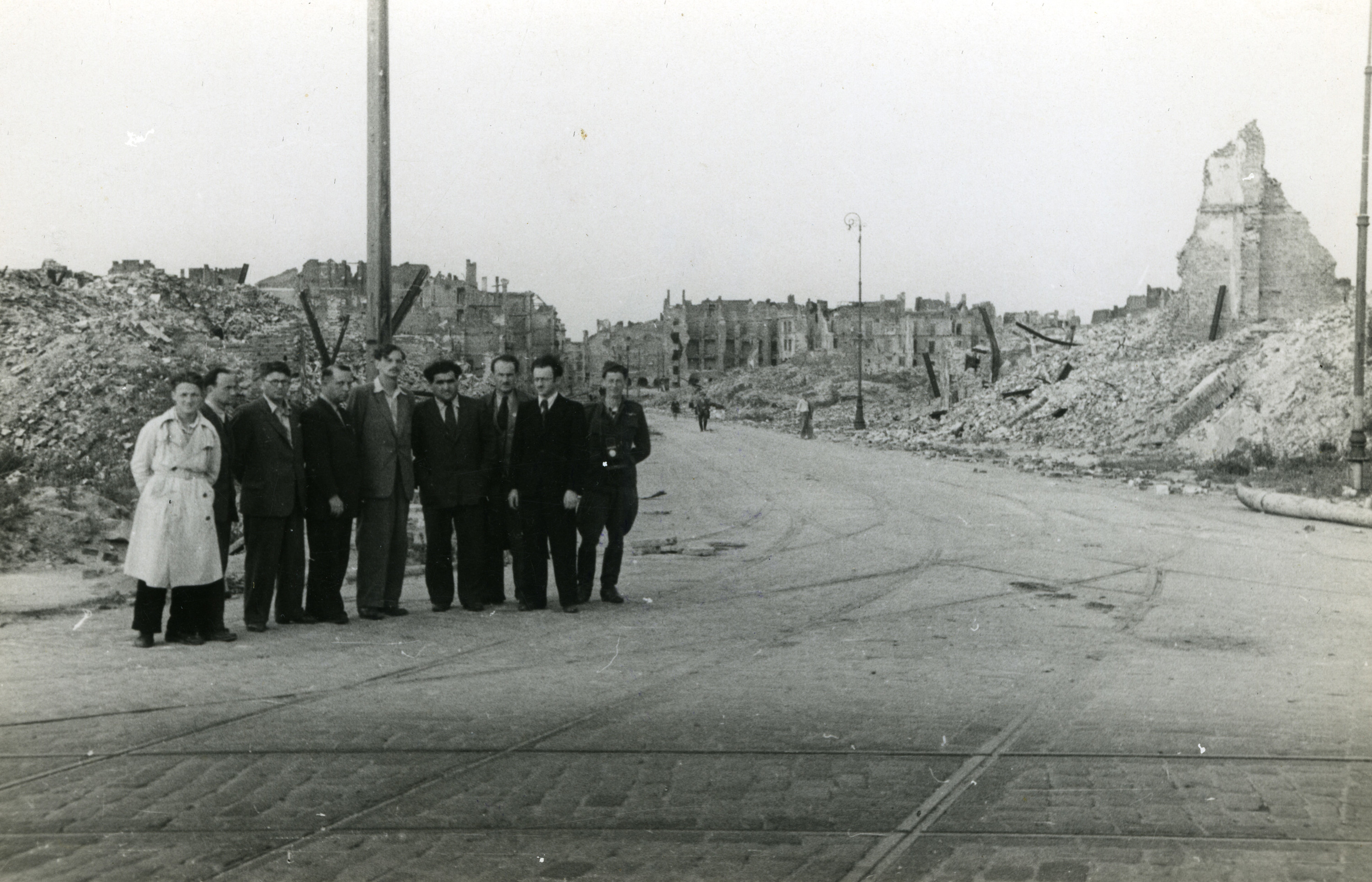 Group portrait of Polish Jewish intellectual and cultural leaders standing amidst the ruins (possibly in the Warsaw ghetto).

Biography
Abraham (Avram) Sutzkever was born on July 15, 1913 in Smorgon, Belarus to Hertz and Rayne (nee Feinberg) Sutzkever. During WWI, the family was deported with other Jews from the war zone by the Russian authorities, and settled in Omsk, Siberia. After his father’s death there, his mother moved the family to Vilnius, Lithuania in 1921. Vilnius was a Jewish cultural and intellection center and the site of both the Mefitze Haskole Library and the Yiddish Scientific Institute (YIVO). Abraham flourished in this atmosphere. He attended a Polish Jewish high school, and in 1933 joined a writers and artists group, Yung-Vilne (Young Vilna), where he met fellow writers and poets. He then moved to Warsaw, where his first volume of Yiddish poems, "Lider," was published in 1937. In 1939, he married Freydke, and the couple moved back to Vilnius where his second volume, "Valdiks," was published in 1940.

In 1941, German forces entered Vilnius, followed by Einsatzgruppen mobile killing squads. In the first months of the occupation, tens of thousands of Jews were killed. Abraham and Freyde initially tried to flee east to areas still under Soviet rule, but were blocked and forced into the newly-formed ghetto. There, in the ghetto hospital, Freydke gave birth to their first child, a son. Nazi policy did not allow Jewish women to give birth, and the baby was killed. Abraham’s mother was killed not long after in one of the many aktions that took place until the end of the year. In January 1942, the aktions stopped, and Vilnius entered a more stable period. Throughout, Abraham continued to write and to actively participate in the cultural life of the ghetto, including a ghetto theater and a youth club literary study group

In 1942, Nazi officials began plans to loot Jewish cultural property in Lithuania, and established a sorting office to review material from YIVO and other sources to either be sent to the "Institute for Study of the Jewish Question" in Frankfurt or to be destroyed. Jewish ghetto inmates, including Abraham, were tasked with sorting these works, which included such items as the diaries of Theodore Herzl and and letters by Sholem Aleichem. Rather than comply, a group which came to be known as the Paper Brigade was formed, headed by Zelig Kalmanowitz, Dr. Hermann Kruk, and Chaikel Lunski. worked to smuggle the material out and hide it in various locations throughout the ghetto. After the war, these works were retrieved, and the bulk of it sent to the United States, where YIVO established a new headquarters.

In the summer of 1943, just before the final liquidation of the ghetto, Abraham and Freydke managed to escape and join the partisan units under Soviet command in the Naroch Forest. In time, all-Jewish units were formed, and Abraham joined one which was under the command of Moshe Judka Rudnitski, whith whom he participated in several missions. While he fought with the partisans, his poem "Kol Nidrei," which described the killings in Ponary reached Russia. It was read aloud at the Central House of Writers in Moscow, and so moved the audience that a public appeal grew to save him. Soviet authorities authorized his resuce, but the first plane to try to reach him in the forest crashed. From the metal fragments of the plane, they made a suitcase, which Sutzkever filled with his poems and the other works he had brought from the ghetto. A second plane arrived in March 1944, this time successfully transporting him and Freydke to Moscow. There, he continued to write, including a chronicle of his experiences in the Vilna ghetto, and a poem detailing the experiences of a group of Jews trying to survive in the sewers of Vilna. The couple spent the remainder of the war in Russia.

In July 1944, Vilnius was captured from the Germans by the Soviet and Polish armies, allowing Avraham and Freydke to return. They initially hoped to recover the hidden cultural material and participate in the rebuilding of Vilna, but the political climate under the Soviets was not conducive to this, and they focused instead on helping to smuggle the material out. In 1946, Avraham was asked to testify about Nazi atrocities that he had witnessed in Lithuania at the Nurmeberg war crimes trIals. After brief stays in Poland and Paris, they immigrated to Palestine in 1947. There, he began a literary career and continued his advocacy for the Yiddish language. He founded the literary quarterly "Di Goldene Keyt," and encouraged Jewish communities to foster the Yiddish language and traditions. In the 1970s, he published what many consider to be his greatest work, the series "Lider Fun Toghukh." In 1985, he was awarded the Israel Prize. He died January 20, 2010, preceded in death by Freydke in 2002. They are survived by two daughters.

Yitzhak (Antek) Zuckerman (1915-1981), was one of the founders of the Jewish Fighting Organization in Warsaw (Zydowska Organizacja Bojowa, ZOB). Zuckerman grew up in Vilna where he was active in the Hehalutz Zionist youth movement. In 1936 he moved to Warsaw to join its head office and set up local chapters of the movement in Jewish communities throughout eastern Poland. After the German invasion, he fled to Soviet occupied Poland, where he helped to organize a Jewish Zionist underground. In April 1940 he crossed back into German-occupied Poland to foster underground activities there. Based in Warsaw, Zuckerman founded an underground newspaper, organized seminars and established a high school. He made numerous secret visits to ghettos in Poland, where he helped to set up hachsharot (agricultural training farms) and to coordinate activities among the various underground youth movements. Zuckerman shifted his focus from education to armed resistance after the onset of mass killing and deportation actions in Poland and the eastern territories. On July 28, 1942 he took part in the founding meeting of the Jewish Fighting Organization in the Warsaw ghetto. As one of the three commanders of the ghetto resistance, Zuckerman played a key role in preparations for the April 1943 revolt. Shortly before the uprising he was ordered to move to the Polish side of Warsaw to serve at the ZOB liason to the Polish underground. In the final days of the revolt, Zuckerman formed a rescue team to get survivors out of the burning ghetto via the sewer system. After the destruction of the ghetto Zuckerman served on the Jewish National Committee, an organization which aided Jews in hiding and maintained contacts with others in partisan units and labor camps. In August 1944 he participated in the Warsaw Uprising as the leader of a group of Jewish fighters. He was finally liberated by Soviet forces in January 1945. For the next two years Zuckerman was involved in Zionist political activity and the Bricha movement to bring Jewish survivors out of Eastern Europe. He left for Palestine early in 1947, where he became one of the founders of the Ghetto Fighters' Kibbutz. In 1961 Zuckerman testified at the Eichmann Trial in Jerusalem.