Musicians from the Bulgarian Tsar's symphony orchestra pose in front of the Trevi Fountain in Rome. 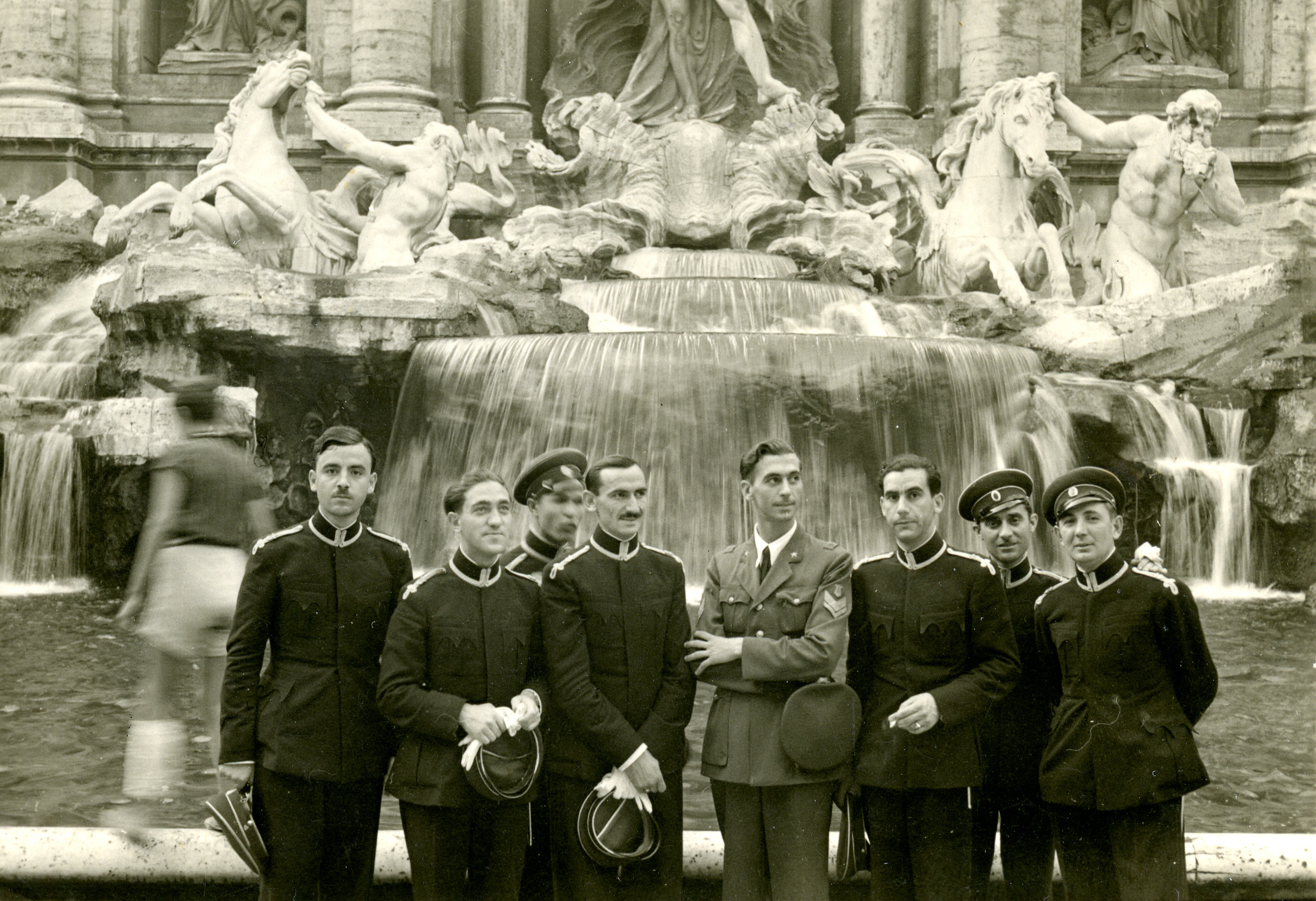 Musicians from the Bulgarian Tsar's symphony orchestra pose in front of the Trevi Fountain in Rome.

Among those pictured is Nissim Alkalay (standing second from the left).

There were three Jewish members of the orchestra: Nissim, Rafael Sidi, and Jacques Savanov. All three were expelled from the orchestra upon their return to Bulgaria.

Biography
Nissim Alkalay was born on March 20, 1917 in Kyustendil, Bulgaria to parents Regina and Mois Alkalay (b. May 15, 1885 in Kyustendil). After his parents’ marriage they moved to Sofia, where Mois was a prosperous businessman in the import and export field. Nissim had two brothers, David (b. September 21, 1908 in Sofia) and Alfred (b. 1912 in Sofia). The family was observant. Education was very important to the family, and each son followed a different professional path. David moved to Paris, where he opened a store. He married a Jewish woman from Turkey, and they had a daughter, Ginette. Alfred went to Leipzig, Germany, where he studied dentistry. After finishing his studies, he returned to Bulgaria in 1938, where he opened a dental clinic in his wife’s apartment. Nissim became a professional musician. He began playing the violin as a child, and played in his school orchestra. His talents were recognized, and he went on to become a violinist in the orchestra of Boris III, Tsar of Bulgaria.

When WWII broke out in September 1939, Nissim was in Rome performing. He was required to return to Bulgaria but prohibited from continuing to play with the Tsarist orchestra, so he taught violin and played with an orchestra at a nightclub to support himself and his parents. In July 1940, Bulgarian authorities began to institute antisemitic policies. Nissim was at one point caught outside after curfew, but managed to bluff his way out. On another occasion, he was caught hiding the Star of David that he was required to wear, by covering it with the strap of his violin.

In March 1941, Bulgaria entered into a military alliance with the Axis Powers. That year, both Nissim and Alfred were sent to forced labor camps, to build roads for the Germans. Altogether, they were in five labor camps, the first four in Bulgaria and the last in Yugoslavia: Mihalkovo in 1941, Trunska Klisura in 1942, Svilengrad in 1943, Smyadovo in 1944, and Surouliza-Bor, also in 1944. The brothers are thought to have been together throughout the moves to various camps, and Nissim was able to join inmate orchestras in some of these camps. In Trunska Klisura, they witnessed the train carrying Jews from the Monopol tobacco factory round-up site to the Treblinka killing center, and threw bread to the passengers.

Nissim’s other family members endured the war in different locations. In 1943, the Bulgarian government expelled the Jews of Sofia to the provinces, including Nissim's parents. They settled in Haskovo, and remained there until the end of the war. His brother David, who was living in Paris, was picked up by the French police and sent to Drancy for a year. He was later deported to Auschwitz, where he died September 22, 1942. His wife, who had a Turkish passport, was able to move to Turkey with their daughter. The two remained there until the end of the war, and then returned to Paris.

After the war, Nissim returned home and continued to work as a musician. On June 19, 1946 he married Lora Beracha, whom he had met in 1942 while playing at the Vitosha nightclub, on a leave from labor camp. Lora was born in Sofia, and was the only daughter of Rashel and Albert Beracha, who was a merchant there. Albert died of pneumonia in 1932. The following year Rashel married a man named Yako, a widower with four children, who worked as a baker. In 1942, the Beracha family was also expelled to the countryside at Haskovo, where they remained until September 1944.

Nissim and Lora immigrated to Israel in March 1949, and settled in Jaffa. Nissim worked as a musician in the Israel opera, in radio orchestras, and he also performed at weddings and other venues. They had a son, David, who became a dentist. Lora died in Israel in 2019.