Kindergarten children sit at their desks at a school in Zilina. 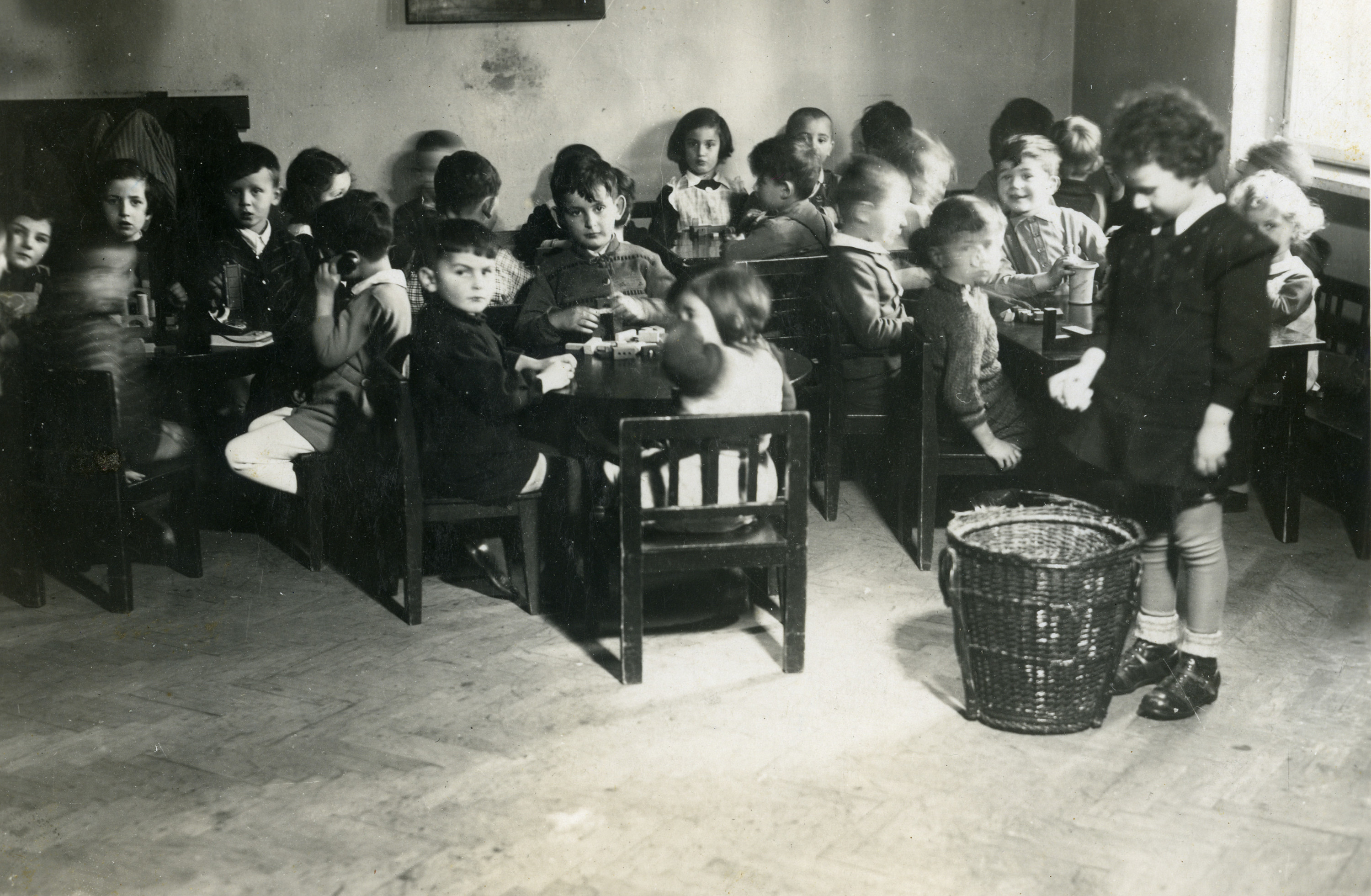 Kindergarten children sit at their desks at a school in Zilina.

Among those pictured is Itzhak Platzner (third from the left).

Biography
Itzhak Thomas Platzner was born on May 12, 1935 in Zilina, Czechoslovakia to Yaakov Platzner (b. 1896, near Zilina) and Aurelia Devorah Blau Platzner (b. 1903, Bratislava). Yaakov had eight older sisters. His father, Arie Platzner, was the director of an agricultural farm. Aurelia was the sixth of nine siblings. Her father, Ignacz Blau had a fur store in the center of Bratislava. He believe that women should have a profession, so Aurelia studied to become a milliner.

Yaakov and Aurelia married in 1930 and moved to Zilina. There, Yaakov worked as a representative of a German company that produced dry batteries, whose headquarters was in Prague. The family lived in a four-room apartment near the center of town, and had a pleasant life, with a governess for Itzhak and summer vacations to spas.

In 1933 Hitler and the Nazi party came to power in Germany. With Germany’s support, Slovakia declared independence from Czechoslovakia on March 14, 1939. That same year, Yaakov was fired from his position. The Platzner family tried to obtain visas to South America and had plans to leave, but on September 1, 1939 the war began and Slovakia closed its borders. New restrictions were placed on Jews, including on the right to work and hold property. The Platzner family had to relocate to a smaller apartment. In 1940 they had to register with the authorities, and by 1941 they were forced to wear the Star of David badge. Forced labor for men began as well. Yaakov found a job as a laborer in a factory that produced alcoholic products owned by the Kulkas, a wealthy Jewish family, where he remained until 1942.

In June 1941 Germany invaded the Soviet Union under Operation Barbarossa. Itzhak, then six years old, recalls standing on the balcony of his family’s apartment watching the Germans pass through Zilina, though he did not understand what he was seeing. In spite of the war, in September Itzhak was able to begin his studies at the Jewish school in the Orthodox synagogue, along with twenty other children. Six months later, the school was forced to close.

Deportations of Jews began in 1942, and decisions about who was to be deported first were made by the local Judenraat. The Platzner family, being relatively new to Zilina and not particularly connected or influential, was among the first chosen. At the end of March, the family was taken to an old army camp near a railroad station, and housed in barracks furnished only with mattresses on the floor. Conditions were horrific. To make life more bearable, a kitchen was set up, and teams were formed to address cleaning and sanitation. Yaakov was chosen for one of the teams, enabling the family to avoid the first transports to camps in Poland. Itzhak soon became ill, with sores covering his body, so he and his mother were removed from the camp and sent back to their apartment. Yaakov remained at the camp but was occasionally able to visit them late at night, though at great risk. In about six months, the Zilina transit camp closed, and Yaakov was transferred. His new task was to help build the football field stadium but, since it was impossible to pour cement in the cold weather, he was sent to shovel snow in public places.

For the next two years, Itzhak and his mother were alone in the apartment building. They may have received help from the Kulka family, but food was scarce and electricity unreliable. One day, at the end of August 1944, his father appeared home unexpectedly. There had been an uprising organized by the Slovak resistance movement. The movement had taken over the city and released the men in the forced labor camps, including Yaakov. The family knew that this was just a reprieve until the Germans took over, so they decided to escape to an agricultural area to the west, where roads were poor and they hoped that the German army might not venture. Yaakov had obtained false papers for the family in their correct names, but as Christians. They reached a small remote village, where they rented a room from peasants. Yaakov pretended to be a Communist escaping from the Germans, and was able to find work in a soap factory. When this location became too dangerous, the family moved to another small village, where Yaakov was able to rent a room from another peasant, in exchange for his labor. Though the family feared that they would be discovered to be Jewish, Yaakov managed to renew their papers with the local police without incident.

In April 1945, the family was liberated by the Red Army and began their journey back to Zilina. They found that their apartment was occupied, but most of their belongings remained. In 1949, the family immigrated to Israel. Itzhak spent two years in the collective settlement Degania B with Aliyat Hanoar, and then returned to Tel Aviv to finish high school. Following his army service, he studied chemistry at Hebrew University in Jerusalem and finished his PhD at the Weizman Institute. He worked for thirty-three years in government service at the Atomic Energy Commission in the Negev. He is married to Nitza, a microbiologist, and they have two children and four grandchildren.