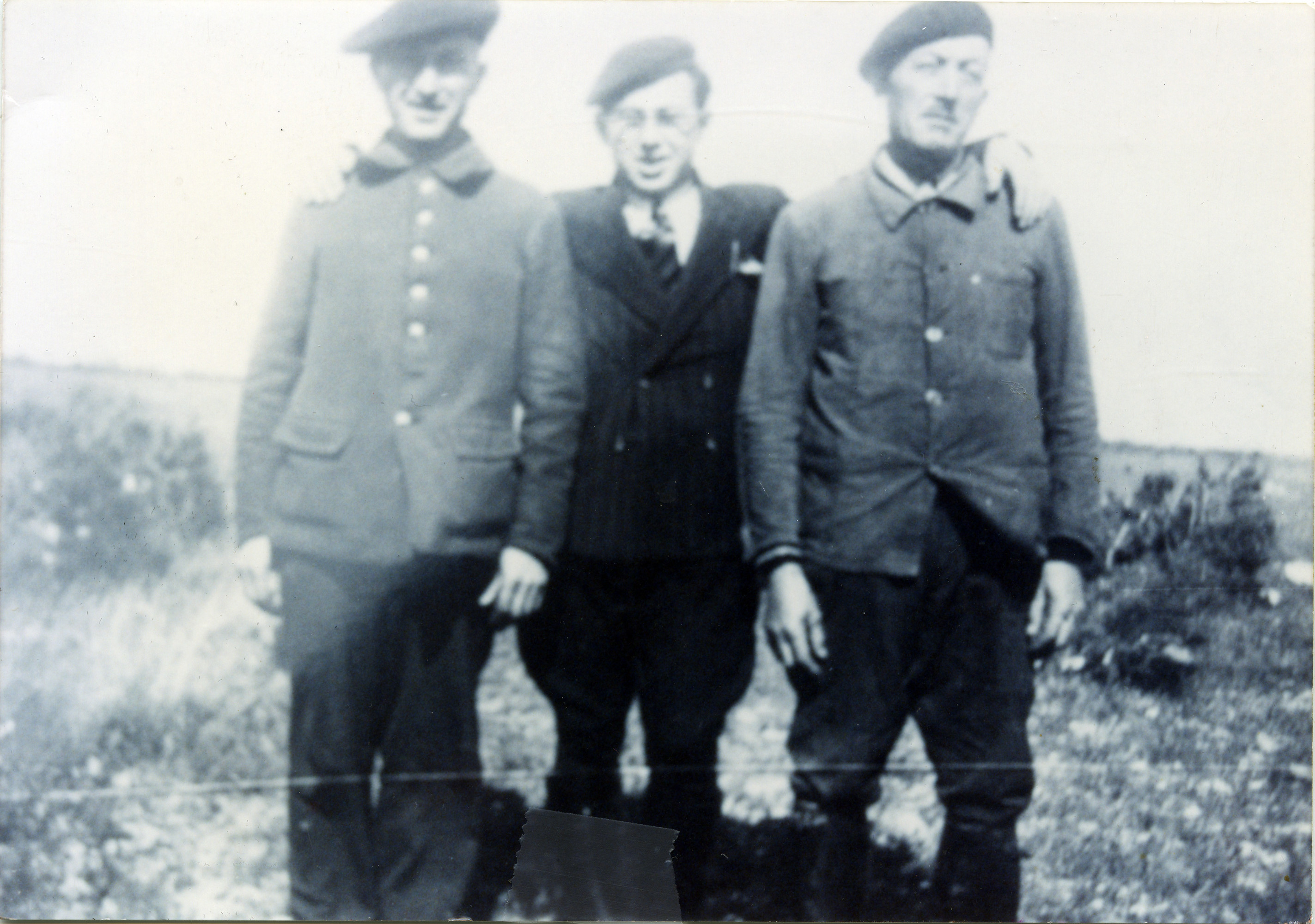 Pictured on the right is Leopold Judas, with his brother Leo (left) and nephew Erich. Erich would later be instrumental in helping members of his family escape from Rivesaltes. All three men were later deported to Auschwitz.

In 1933 Hitler and the Nazi party came into power in Germany, and enacted a series of increasingly antisemitic laws. On November 9-10, 1938 Nazis attacked Jews and their property throughout Germany during the Night of Broken Glass, known as Kristallnacht. The synagogue that the Judas family attended in Ihringen was destroyed. Kurt, then six, recalls that he, along with fifty other Jews, was forced to parade in front of their burning synagogue. Soon after, in 1939, his family’s home and horse stables were confiscated for the use of the German infantry, and they had to relocate to the neighboring city of Freiburg. Jews were no longer allowed to own businesses, and finding any sort of employment was difficult, so Leopold made ends meet by delivering coal.

On October 22, 1940 Kurt and his extended family were deported to the Gurs transit camp, in the south of France. Conditions were difficult, food was scarce, and disease was rampant. After six weeks of internment, Kurt’s grandmother died of typhoid and dysentery. Several months later, Kurt and his family were sent to another camp under the administration of the Vichy collaborators. One night, Kurt and his parents, along with several aunts, uncles, and cousins, managed to escape through the barbed wire fence surrounding the camp. For the next seven months, they lived in hiding on a farm, but they were recaptured and sent to the Rivesaltes camp.

In 1942, as convoys to Auschwitz began, Kurt’s mother made arrangements for the organization Oeuvres aux Secours des Enfants (O.S.E.) to smuggle him out of the camp, along with other children. From that time on, Kurt was sent to a series of hiding places, usually staying no more than a few months at any one location. At the first orphanage, he was abused. The second orphanage was a castle that had been converted to a children’s home, where only Spanish was spoken. He later stayed at another children’s home run by the OSE, a castle called Chateau Montintin, close to Limoges.

Toward the end of 1943 it became evident that the children’s homes might not be safe. Kurt was given false papers under the name of Charles Julien and placed on a farm with an elderly couple named Bourats. He was accompanied by his cousin, Manfred Judas (later Fred Jarvis), who was given the name Maurice. They did chores on the farm and were able to attend school in the afternoon.

After the end of the war, Kurt was placed at L’Hirondelle, an orthodox orphanage of approximately 120 children who had survived the war. He was reunited with his cousin Manfred, but neither of his parents had survived. His father had been deported from Rivesaltes to Auschwitz in 1942, on convoy 13. His mother was deported to Auschwitz on convoy 62, in November 1943. Manfred's parents had also perished. In 1946, Kurt and Manfred immigrated to the United States to live with their aunt, uncle, and cousin.